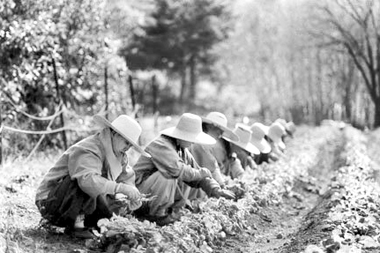 When things are busy, everyone must lend a hand. During harvest, every hand must be used. It is the same in the temple. In Seon temples, following tradition, it is still common to have a farm (usually vegetables, not grains). During the busy farming period, every person in the temple must contribute. There will be the sound of the moktak (wooden percussion instrument) to gather everyone for work.

All the monks in their rooms studying or meditating, must stop what they are doing and meet together. This working together is called “ulyeok.” After breakfast, the ulyeok (what work to do) is discussed. The monks come to an agreement so no one can really complain about the work. The monastics often work under the hot sun in their traditional straw hats. They often sweat because the work is difficult. However, it is also a wonderful practice where one can feel a fresh sense of satisfaction. There is also the satisfaction of sweating from hard work while smelling the soil. We can experience the grace of the earth as the crop is grown. We can appreciate what hard work the Buddhist patrons must go through to make donations to the temple.

Farming is not the only ulyeok. In fact, there is never a month free of work to do. There is constantly work to do from spring to fall, and in the fall, making kimchee is no small task. During this time, everyone in the temple must come together to help in this work.

Lord Buddha taught that practitioners must not work. During that time, work meant farming. Farming involves killing many insects living in the earth. We go against the precept of killing. Also if we work, we cannot give all our energies to practice. For this reason also, work was avoided. Even without working, monks could get enough food through begging for alms. If they needed more food, it was not difficult to find fruits in that tropical climate.

Monks had to be careful even when drinking water from wells and streams. They were required to carry a water filter to save any insects in the water. Some from the Jain religion go as far as to wear masks in order to not swallow microorganisms. Since people of the Jain religion couldn’t kill, they pursued commerce. They have greatly contributed to the Indian and world economies for the past 2500 years. Just like the Jews in the West, the Jains and Chinese are heavily involved in commerce in the East.

Theravadan Buddhism still follows this tradition faithfully so that monks are not allowed to work. The monks don’t even touch money. If possible, they walk and when they must take public transportation, lay people accompany them and pay.

However, as these precepts came to the north, some difficulties arose. Chinese don’t have a tradition of giving alms (food) to practitioners as they do in the south (Theravadan nations). In the Theravandan countries, there is a tradition of preparing food to put in the alms bowl when monks make their morning rounds. There’s no need for the monks to even say a word. 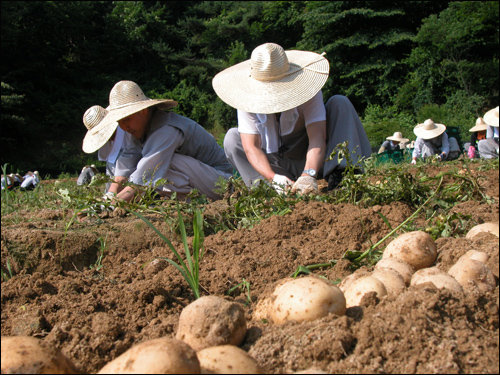 When Buddhism first entered , the royal court and aristocrats gave financial support. The state built temples and the royal family and nobles donated great amounts of land and property so that monastics didn’t have to make alms rounds. This Chan (Zen) tradition rejected the tradition of going for alms. Master Pai Chang was a good example of this.

Pai Chang, a disciple of Matsu Taoi, wrote the “Pure Rules,” temple regulations for monastics. He emphasized work practice as a duty. He was one of the first monks to farm on temple land, and his principle on manual work is one of the defining characteristics of Buddhism of China, Korea, and Japan. This is what is meant by ulyeok or work practice. Traditionally those residing in the temple must participate in chanting and ulyeok. 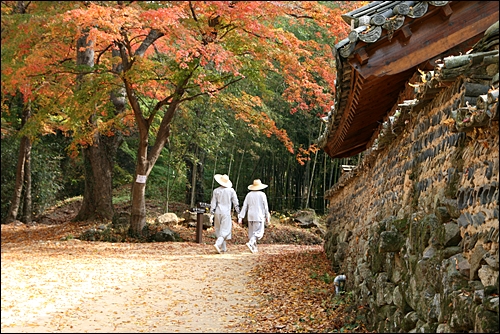 Pai Chang lived to an old age. Even after the age of 90, he was faithful to work practice. Everyday, he would go out to the field with his hoe and plow. People around him worried that he would work at such an old age. They would request him to stop, but he didn’t listen. Finally, his disciples hid the farm tools. When Pai Chang came out to work, he couldn’t find the tools. He knew what had happened. Instead of telling his disciples to bring out the tools, he quietly returned to his room.

The disciples thought that they got their way and rejoiced. However, Pai Chang didn’t show up for the meal. He was showing his disciples that if one doesn’t work, one doesn’t deserve to eat. This is the origin of the famous phrase: “In a day, no work; In a day, no food.” The disciples couldn’t help but bring back the tools and ask for forgiveness.

Korean temple’s work practice is from this tradition of Chan (Seon or Zen) Buddhism. In the warmer Theravadan countries resolved the eating problem by making alms rounds. When this tradition came to the colder northern countries, the self-sufficient farming and work principles were newly established. At times, monastics have been criticized for their luxurious lifestyle. However, the simple and frugal Seon tradition has appealed to the everyday people for its work principles. This is one of the reasons how the Seon tradition has endured vibrantly to this day.