Question: Even if we were to find our True Self, what would be different in our lives?

Embittered by arrogance, jealousy, envy, desire, fear, and anxiety of the ‘self,’ beings live mindlessly and die. This is the fate of ordinary beings. With foolish desire, we try to make all things our own. No matter what great university we graduated from, even if we were the president or high government official, we cannot eliminate conflictive emotions and suffering. When we get to know our true self, the conflicts of the mind disappear. All the world with this self included is one house and one body. We don’t need to make anything our own. Because we are all one being.

Disciple: Seon master, then what is your True Self?

Seon Master: Ha ha ha, have a cup of tea. 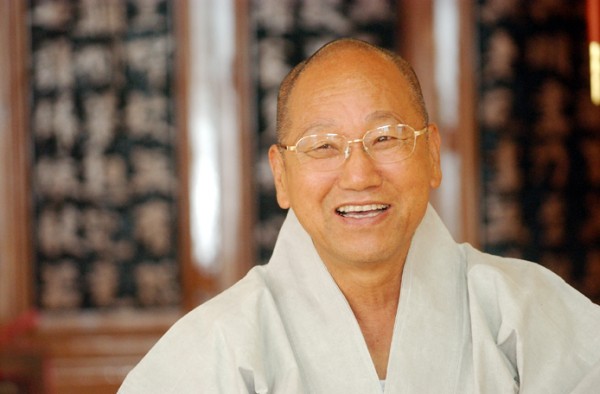 Seon Master Jinje was born in 1934. He took monastic ordination at 21 in 1954 under Seon master Seoku as the vocation master (eunsa Sunim) at HainsaTemple. He resolved the gongan at 33 and wrote a song of enlightenment. He received official recognition of his enlightenment from master Woonbong, and inherited the dharma lineage of masters Kyeongheo, Hyewol, and Woonbong. There is a common saying in the Korean Buddhist community, “Songdam in the north, and Jinje in the south,” which means there are two great Seon masters in . He served as the spiritual patriarch (joshil) of the renowned Taego Seonwon at BongamsaTemple. With his profound teachings, he has maintained the Seon lineage in the Busan area of . He always teaches that ganhwaseon (hwadu meditation) is the top practice method. He established HaewunjeongsaTemple in 1971 and Geumcheonsa Temple of Kyeongju City in 1999. He is currently the spiritual patriarch (joshil) of DonghwasaTemple. He became a member of Jogye Order’s Council of Elders in 2003. He also received the prestigious designation of Great Master (Daejongsa) from the Jogye Order in 2004.