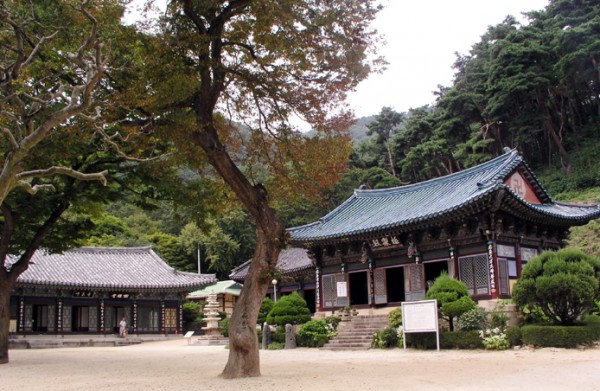 Hyangcheonsa Temple on GeumosanMountain was founded in the Baekjae period by Ven. Uigak. This has been a place of practice for many great monks throughout the ages, having over 40 buildings at one point. However, through fires and the passage of time, there are only a few vestiges left. A stone Buddha left by the founder Ven. Uigak, statues of the 16 arhats, a cracked stone stupa, and memorials for great past monks remain from the past. Majority of the buildings have been built since the 1970s. There were five smaller temples or hermitages in the near vicinity of Hyangcheonsa, but only two remain. This indicates that Hyangcheonsa was a great temple in the past. Temples of great scope usually have many hermitages in the vicinity.

This temple’s founder Ven. Uigak was a great monk who would constantly recite the Heart Sutra in his mind. It was recorded in the History of the Three Kingdoms that light would radiate from his mouth and eyes due to this practice. After a short stint in , Ven. Uigak went to for personal practice and to make many Buddha statues. He made 3053 Buddha statues and 16 arhat statues out of precious stone, and Amitabha, Avalokiteshvara (Kwanseum Bosal), and Vajrapani (Desiji Bosal) out of Juniper. He returned to Baekjae with these statues in a stone boat. However, he couldn’t find an appropriate place for a temple, and he prayed earnestly for one month. Then, the sound of Sutra recitation and a bell rang forth from the boat to reverberate throughout the local village. Now this village is named Jongseongri meaning ‘bell sound village.’ Another day, Ven. Uigak saw a golden raven above the boat. He followed it. When the monk came close, the raven disappeared and a wonderful scent permeated the air. He decided to build a temple in the same place. The mountain was named Geumosan (golden raven mountain) and the temple, Hyangcheonsa (fragrance fountain temple). In addition, a white ox was used to transport the Buddha statues from the boat to the temple for seven days. The work was so arduous, the ox died letting out a great bellow at the entrance of the temple. There is a boulder there called ‘bellow rock.’