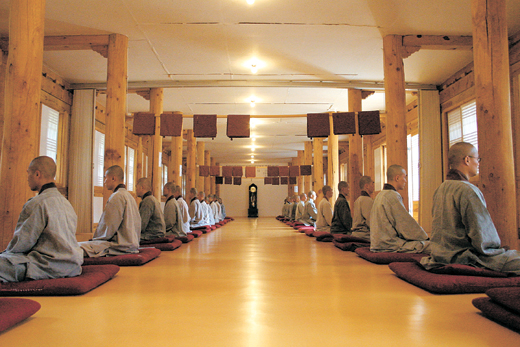 Monastic Training System of the Jogye Order of Korean Buddhism

The Organization and Assessment of the Buddhist Practice and Training System

Jogye Order’s training system can be broadly classified as:  1)  Elementary Training,  2)  Basic Training,  3)  General Training (specialized training),  4)  Re-training.  First is the postulant (hangja) training for a minimum of six months.  Second is the four years of training for novices (shramanera/shramanerika or Sami/Samini) undertaken at temple Sangha colleges, Dong-guk University’s College of Buddhism, Joong-Ang Sangha University, or elementary Seon centers.  These first two trainings must be completed by all Jogye monastics without exception.  When the “elementary training” is completed, one can become a novice monastic (Sami/Samini).  When the “basic training” is completed, one can take the full monastic vows, and attains the qualification and rights of being a Jogye Order monastic.  Third is “general training” where a monastic can pursuit specialized training after receiving full monastic ordination.  Fourth is the “re-training” for monastics who have been ordained 5, 10, 20, and 25 years.  This is not obligatory, but it is the training process necessary to carry out certain responsibilities as set out by the order, and to hold positions in the order, as well as train disciples.  The following charts illustrates the training system.

Obligatory Training Before Full Ordination as a Bhikkhu or Bhikkhuni