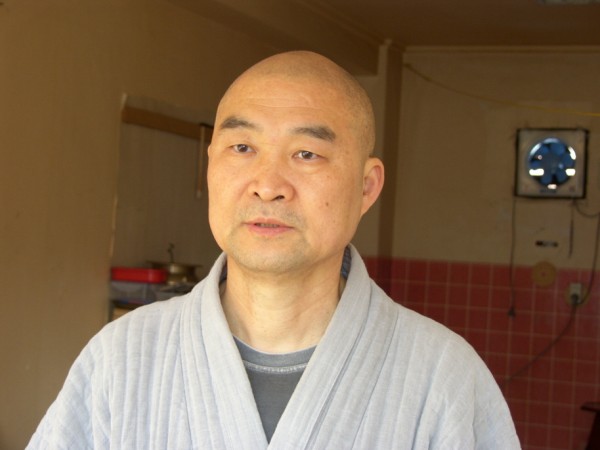 Ven. Bori, the Director of the Wongaksa BuddhistCenter

There is no one at home.  The wife passed away a few years back.  The children are grown.  They don’t call much.  The old man is alone.  Where does he go?  Without a specific destination, he will take the bus or subway.  He will get off at Jongno 3ga Station.  He will invariably stroll into PagodaPark (Tapkol Gongwon).  He’ll take up a game of Baduk or Jang-gi (Korean board games).  He’ll pass the time in leisure conversation.  He may have a drink or two.  He’ll meet many just like him.  At least, he won’t be alone.  At least, he won’t be bored.

The PagodaPark in the heart of Seoul has long been a meeting place for elderly men.  It has become a place to go for the lonely and old.  A few are homeless and a few are family-less.  Mostly, people are looking for some comfort in their latter years.  These men are in the winter of lives.  Over a hundred gather each day to pass their time at this historic park.  PagodaPark is so named because of a 10-tiered pagoda that is enshrined behind glass.  Built by King Sejo, son of King Sejong in 1467, it has been designated national treasure No. 2.

Just beyond PagodaPark is a small Buddhist center, Wongaksa.  They serve a free lunch for the elderly passing their time at PagodaPark .  Ven. Bori has been serving food to the poor and elderly since 1992.  What began as bread and milk a couple times a week has expanded to feeding around 150 people rice and vegetables every lunch.  For some of the elderly, this lunch is their only meal.  After lunch, they file pass the Ven. Bori with gratitude, as a volunteer gives out socks.

The temple is supported only by donations.  If you would like to help, please contact WongaksaTemple at 82-02-741-8822.  Ven. Bori speaks a little English.