Seon Master Mokju Domyeong called to a practitioner, "Venerable sir!" When the practitioner turned his face around, the Master said, "You must be the ’Dampanhan.’" The "Dampanhan" means an idiot carrying a large flat board on the back. Owing to the huge flat board on the back, he cannot turn around, and can see but forward. This is a figurative way of saying about a person who only sees a part of a thing, not a whole view--a  pigheaded, the most narrow minded man of adamant. 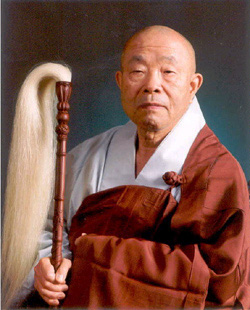 The great Seon Master Chao-chou also chided the slothful practitioners "Dampanhans." When a practitioner from the South asked a permission to attend the Master’s assembly, the Master asked him, "I understand that the Buddha Dharma is greatly flourishing in the South. Now, what did you learn there?"
Student: "How can there be any difference in the Buddha Dharma between the South and the North."
Master: "Even if you were from the assembly of the great Masters such as Seolbong Euijon and Ungeo Doeung, you are nothing but a "Dampanhan." Both Masters are, of course, great teachers, but what is important is not under whom one has studied, but whether one has awakened or not. The muddle headed practitioner was just imitating the famous episode that took place between the Fifth Patriarch Hung-jen and a young country woodcutter, who later became the Sixth Patriarch Hui-neng. He surely deserved to be called a "Dampanhan."

Today is the closing day of the winter retreat after three months-long practice. Everyone should go straight ahead, never looking or turning around. Holding a hwadu should be also like the way of a "Dampanhan," a fool, who only sees ahead without any deluded mind. The retreat is the way of making the body like that of a "Dampanhan in the sitting position," and closing of the retreat is the way of making the mind like that of a "Dampanhan" in the standing position. Everyone should practice with the body and the mind like a "Dampanhan," a foolish man of one-pointed mind, which is the only way to shed off the disgraceful title of "Dampanhan." Try to be called, "You, a real ’Dampanhan!’ by the fellow practitioners and the masters. That is the surest way to get rid of the ignominious title of "Dampanhan."

How could one distinguish who will be called a "Dampanhan"
With an eye closed?
I hear the cry of a stone-totem pole in the deep of the night in the
great mountain under the clear moonlight.
It must have been hit by an arrow right through the heart.