One City, Under Gods

We are seated on pillows beside the fireplace, bowls of steaming water warming our tea-cups. Handmade rice-paper lanterns filter rows of tiny electric light bulbs overhead, giving the room the soft light of dawn. Bikkhuni Sungak Sunim prepares to serve three teas: the first mild, as teenagers know life; the second very rich (“This is the middle life”); and the third slightly bitter (“Power, energy; everything has been given to children and to other people”). She carefully pours the first cup, which has its own ceramic cover. “I am going to give this one to the Buddha!”

Her brown robe unfolds smoothly as she rises and goes to the altar, smiling up at the golden Buddha statue that took more than a year for a Korean master to create. “I told him, ‘This Buddha stays in the United States; maybe in the future it will become one of the treasures in St. Louis,’” she recalls
Advertisement

. “‘Please make him one of the most beautiful Buddhas—and make his face a mix of Korean and American faces, and in his robe—’” she points to the ties, which form the shape of the Gateway Arch.

A Buddhist monk of the Chogye order, Sungak is celibate and has formally studied Sanskrit scriptures and meditation (“to learn the heart of the Buddha”) for more than 15 years, in addition to earning a master’s degree in social work from Washington University. She had intended to go on for a Ph.D. and return to Korea as a professor, but fellow students at Wash. U. begged her to teach them to meditate. “They were thirsty for the peaceful experience,” she says. “I said, ‘OK, please come, but I don’t have any cushions.’ I thought they would give up. But for two years, every Sunday, knock! They come. So I give up. OK, Ph.D. later. I must start a temple here.”

In 2002 she founded the Buddhanara Temple and Monastery in a small, serene house in Olivette, and she is now looking for three acres on which to build a meditation center.

“If people are not peaceful, they make mistakes,” she says. “They cannot control their anger. They are very sad.” Americans, she’s 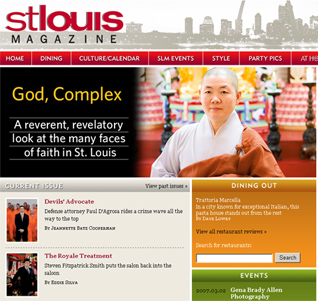 noticed, lose peace by constantly comparing themselves to others—and rarely living in the present. “Some people say, ‘I was so beautiful 10 years ago’ and want plastic surgery right away. They still want to live 10 years ago, their past life!”

Sungak offers a list of 10 meditation guides, from “Why long for a life free from hardship? It only leads to self-pampering. Make worries and hardships a way of life” to “Why expect rewards for your kindnesses? This leads only to a scheming mind.” She speaks of Buddhism’s four vows: to save all beings; to end all suffering; to learn all Dharma teachings; to attain enlightenment. “To save all beings, start with small kindnesses,” she suggests, “not torturing animals, not wasting food. If you must eat meat for protein, please eat this much” (she makes a circle of her thumbs and forefingers) “and none left, and say, ‘Thank you, cow!’”

“Sometimes I do,” she says cheerfully. “Cockroaches. But I bow to them and say, ‘I am so sorry.’ And not squashing; that is cruel. I pick them up and say, ‘I’m living here, and I’m scared of you. Your house is not here. Your house is outside.’”

Lay Buddhists follow five ethical rules: no killing, no lying, no stealing, no intoxication, no misconduct (e.g., infidelity). The emphasis is on freedom and the equality and connectedness of all living beings, not on dogma. “We don’t say, ‘Oh, you must believe the Buddha.’

“An issue like abortion, yes, that is a killing,” Sungak adds slowly, “but it is very complicated. Don’t push from the religion; think first about the mother, why she wants the abortion. Ask what is the best choice for her. Her life is important, too.

“And we never say ‘gay’ or ‘lesbian,’” she adds. “They are different species? No, they are human beings. They are Buddha nature; they can become Buddha too. No bias.”
http://www.stlmag.com