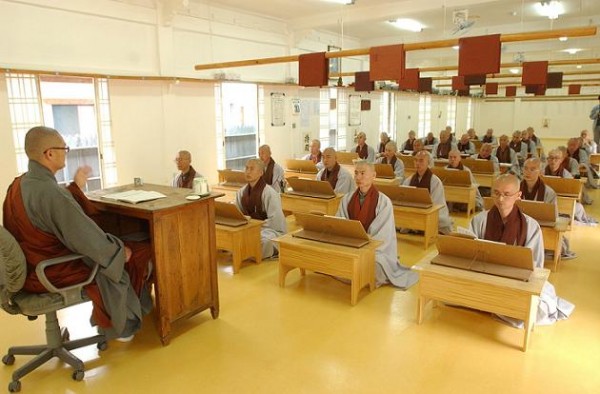 In the Seon school, disciples with extraordinary spiritual capacities are referred to as dharma vessels (beopgi), which suggests that they are vessels capable of containing the dharma. When Huineng, a woodcutter and novice laborer, had an audience with the Fifth Patriarch Hongren, he responded to Hongren’s discriminatory remark that he was a “southern barbarian” by saying, “There is no south or north in the Buddhadharma.” Hearing his response, the Fifth Patriarch recognized him as being an extraordinary dharma vessel. Huineng subsequently became the Sixth Patriarch of Chan Buddhism in China and established a firm foundation for the Chan school.
Ordinarily, the collections of the patriarchs’ dharma teachings are called discourse-records. However, the discourse-record of the Sixth Patriarch Huineng was recognized by posterity as a sutra, in order to distinguish it from other discourse-records. Thus, Huineng was a person with extraordinary spiritual capacities, who was like a Golden Pagoda that had a lasting effect on the Seon school. Hence, the Platform Sutra, the discourse-record of Huineng, received high praise from early on as the equivalent of a sutra. This is not to suggest that other discourse-records are inferior; it merely means that the keen-eyed Fifth Patriarch Hongren recognized Huineng as the future leader of the Seon school the very first time he saw him. It is like the proverb, “One can tell that a sapling will mature into a strong tree just by looking at its young leaves.”
The Chan master Xuanzang discovered his dharma disciple, Kuiji, when the latter was just a young boy. Despite the adamant opposition of the boy’s parents, Xuanzang eventually persuaded them to let him take the boy back to the monastery with him. He then put the boy in his monk’s backpack and brought him to his temple. All his actions were for the sake of the dharma.
Bodhidharma, the founding patriarch of the Chan school in China, must also have been an extraordinary dharma vessel. His teacher Prajñātāra recognized his extraordinary spiritual capacities and received him as his own disciple. Bodhidharma, who was the third prince of the South Indian king, uttered extraordinary words even before he had ordained. Once his royal father showed him a radiant and beautiful pearl and asked him what he thought of it. He responded, “This is merely a jewel from this ordinary world, so it is not precious. Of all jewels, the jewel of the dharma is the most superior of all. The pearl’s radiance is also just the radiance of the ordinary world, and thus is not precious. Of all radiances, the radiance of the dharma jewel is the most superior of all. The pearl’s illumination is also just the illumination of the ordinary world, and thus is not precious. Of all illuminations, the illumination of the dharma jewel is the most superior of all.”
In the eyes of people who are full of greed, ordinary pearls mean a lot. However, for those with a different value system, pearls are no more extraordinary than ordinary glass. How can ordinary pearls be compared to the extraordinarily precious dharma? Hence, the jewel of the dharma is referred to as the dharma jewel. How far can the radiance of an ordinary pearl shine? But the radiance of wisdom can illuminate the whole world, clearly and brightly. How is it even possible to compare the duration and extent to which they radiate?
Just like a dharma vessel, Bodhidharma truly expresses his perceptions from the standpoint of Seon. “The illumination of this pearl does not shine on its own, but the illumination of wisdom stands out from that of an ordinary pearl. Once one distinguishes the pearl through the illumination of wisdom, one will recognize that it is a jewel; once one recognizes that it is a jewel, one will understand that it is a treasure. However, even when one understands that it is a treasure, it does not become a treasure on its own; even when one recognizes that it is a jewel, it does not become a jewel on its own. Because a jewel does not become a jewel on its own, it is the jewel of wisdom that distinguishes it from the rest of the jewels in the ordinary world. Because a treasure does not become a treasure on its own, it is the treasure of the dharma that illuminates it as a treasure.”
Persons with such perspicuity must be recruited into the sangha; even if you have to run a thousand leagues to reach them, it would not be too far. What is more important, however, is that, once such persons are recruited, they be well developed so they become dharma vessels. Some time ago, it was big news in our society when several college students from a prestigious university aroused their aspirations to attain enlightenment and together took vows to ordain as monks. Those same monks were recently featured again in the media during a special program on the Buddha’s Birthday. But seeing them now living outside of an established regimen of training, I couldn’t help but feel a bit regretful. How hard we tried to guide them with utmost affection! Kuiji’s unreasonable demand that he would ordain only if he did not have to obey even the five lay precepts was readily accepted by Xuanzang as a stratagem for getting him to ordain as a monk; afterwards, he guided Kuiji to arouse his own aspiration for enlightenment. The Chan master Xuanzang thus was able to show him the correct path to enlightenment and develop Kuiji into a consummate practitioner. Hence, his perseverance and perception now transcend all eras and shine ever more brightly.