A disciple asked the Seon Master Dongshan Liangjie (Tongsan Yanggae), “Summer’s heat and winter’s cold are soon to come. How can I avoid them?”
The Seon master replied, “Why not go to a place where there is no heat or cold?”
The disciple asked, again, “Where is that place that has no heat or cold?”
The Seon master replied, “When it’s cold, you freeze to death; when it’s hot, you swelter to death.” 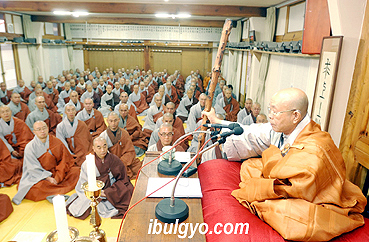 The long, hot summer has ended and the winter-retreat season is upon us, where we worry instead about the cold. In the ephemeral reality of sentient beings, we never cease worrying about whether it is hot or cold. In reality, once we realize the fundamental principle of cold and hot, we’ll find they’re just the same. The emergent cold and heat refer to the coming and going of birth and death. That place that has neither cold nor heat refers to a place where there is no existence involving birth and death. Hence, what the disciple is really asking the Seon master is what he can do to avoid the principle of birth and death.  Seon master Dongshan replied, “Why don’t you go to a place where there is no heat or cold?” But the disciple did not understand the master’s true meaning and continued to commit his foolish acts, as if he were trying to capture the moon’s shadow by climbing the stone steps back and forth repeatedly like a hunting dog chasing the dirt. Since his wisdom had yet to be awakened, he had no other choice. Those who stupidly utter nonsensical remarks ought to say nothing, even if they were to freeze to death or die from heat exhaustion. This would still be true even if they had a hundred mouths on them instead of one.
Oh, winter-retreat assembly!
The place where there is no heat or cold has no cliffs and no gate. If a person can rest one’s body and life in such a place, all worries will permanently vanish. If not, however, one will be subject to heat and cold that will repeatedly demand your life. Hence, in order to overcome such sentient beings’ views, we have gathered here to attend the winter retreat.
Lastly, if a person were to ask me this question, this mountain monk, “Forget the heat. How can I avoid the approaching cold?,” I would bluntly reply, “What’s the point of avoiding it?”

When it’s cold, one must understand the true meaning of freezing to death.
Over the long night, snow piles up under the bright moon.