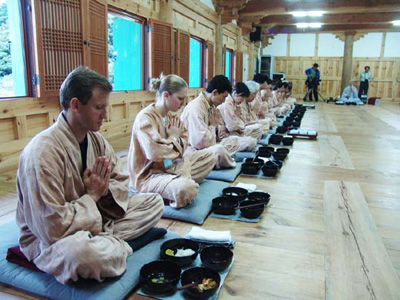 In the Early Buddhism period, all monks had to come out from their retreats such as shaded areas or caves to beg for food. They walked around all over the residential areas until they gathered just the right amount of food, and then returned to their place to finish their meal before noon.

The "one-meal-a-day" rule was strictly practiced during that time, which means that during the "inappropriate time", from noon to next morning, all monks ate no food at all. Shakamuni Buddha himself had only eaten one grain of barley and one grain of sesame seed during a six year period. Likewise, all the life forms were sustained by their intake.

In the earliest days, Buddhist monks have no specific place to stay. However, during the 3 months monsoon period, they were allowed to stay in one place. This is the origin of so called “Retreat.” The monks were anxious to do some intensive meditation with Shakamuni Buddha.

As the Retreat program further developed, the rich and the royal families donated the building of Retreat Center to the Buddhist community, which then developed into the very first Buddhist Temple, the bamboo grove of Venuvara and soon took the form of a shrine.

With the changes of shelters for the monks, the dietary patterns also underwent changes as well. The monks, who used to beg for food, now received food cooked by lay buddhists. At any rate, the monks during the Shakamuni Buddha period went through much tougher physical torture and pain for a higher religious achievement.

The main dishes included the five cuisines of dried rice, steamed beans and barley, powered grain, meat, and rice cake. The side dishes included vegetables, leaves, flowers, fruits, dairy products, and honey. There was no ban given on any specific food, but it did not mean that meat in general was freely allowed. The following meat was allowed only to those male monks with serious illness.

Ojongjeonyook: five eatable meat including the above three purified kinds of meat plus the following:
-Meat from the naturally dead animals
-Meat left-over from the animals killed by other predetary animals

Through the origins of the above historical background, it was around the AD 1 when this unique Buddhist food and dietary habits of a strictly vegetarian cuisine were established. When Buddhism was introduced in Chinese, liquor and meats were allowed. However, Buddhist cuisine and dietary patterns changed through the Liang Dynasty in pursuit of simplicity and purification of both the body and the mind. In the Chinese temples, the main food was porridge, and the supplementary dishes were vegetables, mushrooms, and tofu grown and/or prepared directly by the monks themselves. Furthermore, since the rising of Mahayana Buddhism, such five spices as garlic, scallion, leek, wild rocambole, and dried lily stems have not been used in the Buddhist cuisine as they were and still are known to be (sexual) stimulants.