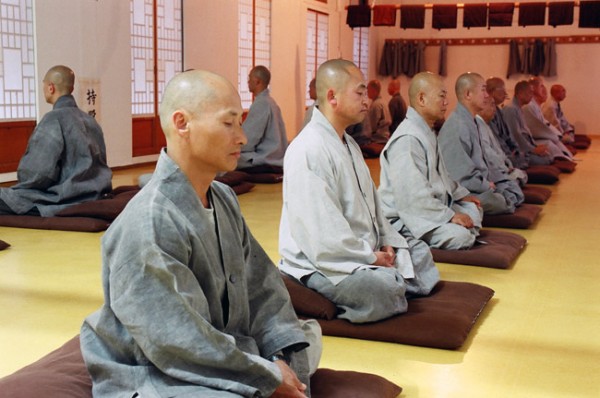 After the morning prayer chanting, I sit on the cushion to start meditation. But every time drowsiness gets the upper hand. I can overcome sleepiness when meditation goes well, but when the hwadu is not quite working, I have to lie on my back.
We heard that the ancient Masters had to place a sharp drill under their chins, or pinch their thighs until they bruised in order to chase off sleepiness while they practiced meditation. It is amazing to think how earnest they were in their meditation practice. They’ve become the paragons for my own meditation practice.
As usual, I sit on the cushion after the morning prayer chanting. Time goes slow and sleepiness comes fast and heavy. I try to shake it off, but it’s of no use. At first, I doze in the upright position, but gradually the drowsiness completely overpowers me. If one cannot overcome sleepiness, proper meditation practice is out of the question. But isn’t that just what I’m falling prey to right now?
In our daily lives, there are too many things that do not go as well as we’d wish. Indeed, there is rarely anything that goes as well as we’d wish. This is how everything goes, no matter how hard we try. That is why in order to live a beautiful life, it is imperative that we mutually maintain a mind of kind consideration for others. Think always about walking in others’ shoes.
Once, there was some happening at a Seon monastery. A man working at the monastery saw monks dozing off during meditation practice, and he muttered to himself: "Hmmpf… if it just means sitting there and dozing off, I can do it, too." To the worker, what he saw was merely dozing off, not practice.
One of the monks had heard what the man had said. After the meditation session was over, the monk went to see the man, and suggested that they practice together, if only just once. The man accepted the suggestion, thinking that he could surely do it. But it turned out to be not as easy as he thought. He somehow managed to sustain himself for about 30 minutes, but after that, his body started to ache all over. Ultimately, the man simply gave up. He now realized how hard it was to sit and practice.
From that point on, whenever his cow wouldn’t work hard in the field, he would say to the animal: "If you don’t work hard, I will force you to train in the meditation hall." We are all born in a different mode. Our thoughts and abilities differ greatly. The only way to negotiate these differences is through kind consideration for on another. If instead, I just try to impose only my point of view, this can’t help but breed separation and discord and there will be no end to the conflict and confrontation. There’s a saying that helps to put this all in perspective for me, "The world is one single flower." It’s quite beautiful if you really think about it.