I recently met an acquaintance whom I had not seen in quite a while. She no longer had the young face that I remembered. Hers was the rough face of an urchin, a vagabond, and looking at her left me with a peculiar feeling. She did not have the look of an ordinary person. I asked her what she had been doing with her life. She said she had been traveling all over the world and studying Buddhism, noting that it had already been over ten years that she had been simultaneously studying the religion in both theory and practice. When I had first seen her she was a freshman in college. Now she looked as if she could be a housewife, a middle aged mom. Yet, she had never married.

She said she was now studying in Varanasi, India, the site of Shakyamuni Buddha’s first sermon. I myself had been there for a short time and the impression it left was not pleasant. As I remember it, the air of Varanasi hung heavy with soot and dust. It didn’t seem a place well suited for living. But that was where she said she now was. I asked her whether it wasn’t a rough place to live. Her answer was not what I had expected. "Well, I am still living, so... what’s the problem?" she said.

This reply brought an instant shock to my consciousness. Her answer reverberated in my mind as “living words" of Seon. Her stark statement about living a life unencumbered by any conditions, simply happy to be alive, enlightened me to reality of my own shackled life, entangled in conditional happiness. The lucid wisdom in her answer, basically that since she was alive there could be no worst case scenario, made me feel ashamed. 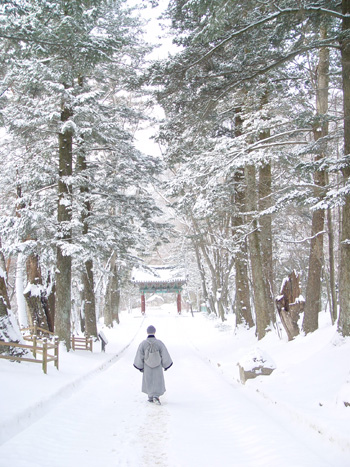 It made me recall an Indian fable.

A farmer who thought his life was at the end of his rope visited a sage for advice. He told the sage about his miserable circumstances and asked for some solution. "I am now living in a hovel with my wife and five children. The dilapidated condition is unbearable. I cannot endure it any longer and so I’ve come to seek your help." The sage then gave his answer. "Well, bring your calf into your house to live with you."

The farmer protested, thinking that the sage was fooling him. But the sage kept silent. With no other alternative, the farmer returned home and brought his calf inside to live together with the family in the hovel. His family raised a clamor, saying that there was no way they could possibly endure this worst possible scenario. The farmer visited the sage again and told him that the situation was now even worse than before and asked for another solution. The sage’s advice this time was to take the calf back outside.

The situation that we are presently living through is never a worst case scenario. It is all merely something that must be endured. A worse situation can always be imagined. The brilliance of the sage’s wisdom was in creating an situation even worse than the present to show the farmer that what he thought was the worst was not. My acquaintance’s answer,"I am satisfied that I am still alive" was no less sagacious than the sage’s. Her wisdom must have come from being witness to the realities of life’s difficulties, clarifying the true worth to be held in simply being alive.

Are you thinking your life is as bad as it can get? If you are alive now, then this is already not the worst that life can be. In the scorching hot weather, the fresh breeze of the early morning beckons.