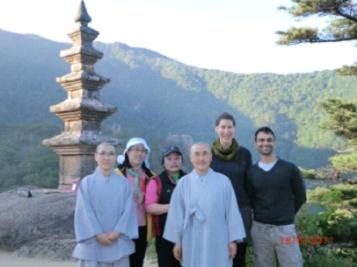 On June 18th, the BerojanaInternationalSeonCenter devotees felt quite excited with the thought of going to the BongjeongamTemple in SeolaksanMountain . It is especially exciting because two western practitioners, Maria and Joseph from the English Sunday Seon Meditation Class will join them this time. But, whether these two will adjust well to the environment was questionable.

Approximately 1300 people will come to the Bongjeongam this week and because there is not enough space, everyone will have to sleep in a 50 cm widths by 130 cm height space. Moreover, there is a high possibly of losing even that small space if you were to go and pray at the temple, which means everyone will have to be considerate and make space for each other.

Maria became quite alarmed when we translated this information to her. She mentioned her height is approximately 180cm. Westerners are used to having their own space, so securing one’s personal space is very important. So, we were quite concerned whether she can sleep at all in such a restricted space. However, when we asked her next morning how the night was, she responded with a bright smile that the night was great. Then we asked her what was most impressive and memorable. She said the morning service around the Buddha’s Stupa (where the Buddha’s relics are kept) was fantastic and added, “It was one of the most beautiful experiences of my life.” She said praying under the moonlight and going around the Stupa with a lamp was a most magnificent thing she experienced.

Joseph, who confidently said he is a devout Buddhist, stated the camaraderie he felt with other Korean Buddhists was especially beautiful and special for him. Westerners normally worry about their own needs. For example, they do not think to share with other people if there is not enough to eat. Most people think only for one self. It was very beautiful to see, hear, feel, and to eat with other Koreans because it made him feel very warm inside. It was his first time to sleep in such a confined space with a lot of Korean people. But, what was very strange to him was that he slept incredibly well. But, he carefully asks questions about the way the Korean Buddhists pray. “Sunim, am I understanding this correctly? It seems like people are praying for the Buddha to do something for them. How is that any different from relying on a ‘god’? I thought the Buddha told us to practice? What is the purpose of chanting with desire for something?” Ah! He gets to the heart of the matter.

There is no need to change the Korean Buddhist Traditions to impress other International Buddhists.  It is enough to show the beauty of what we already have, because our Korean Buddhist Traditions are very beautiful on its own and foreign Buddhists will surely be impressed by them. However, we need to continuously think about new ways to propagate Korean Buddhism internationally. It may seem very obvious to us, but we need to find appropriate ways to explain our culture in a way foreigners can understand easily.

On August 19-22, the BirojanaInternationalSeonCenter will hold the 5th English Teachings Class for Children at the beautiful MagoksaTemple . The Magoksa has over 1000 years of traditions.

A number of Native and Korean English teachers, together with Buddhist monks will teach Buddhism in English to children.

First come, first serve basis. Can accommodate up to 60 students, from Grade 2 Elementary School up to Grade 2 Middle School students