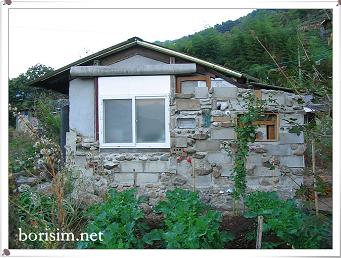 Pic. A fence made with plastics and other discarded items

When you live at the bottom of the hills, it feels like the fall season passes by rather quickly. Even before entering into the fall season, preparation for winter begins. The double screen windows are installed, and walls are created if deemed too thin. This wall we made is in front of the Hyunhyun Sunim’s cave. A great art has been created when we stacked up all kinds of trash we managed to hold on to without discarding.
When I took a step back and looked at the Sunim’s wall, I felt that the wall resembles the life Sunim led.

The Sunim was born in a town called Hamyang. When he was a kid, he would stare at the sky and think about the end of the universe, or immerse into the thought of death, which immediately lead him to Samadhi. He often thought he must make do with the worldly affairs as quickly as he can, so could study what he truly wanted. About the time when he graduated from middle school, he carried out his idea into action with just one thought, “I must finish these worldly affairs as quickly as possible.”

After giving up high school, the first place he ended up was a barber shop in his town. The neighbors could not understand why the son of the famous doctor was working at a barber shop. But, since the Sunim’s father wished for the Sunim to gain technical skills rather than to pursue academics, his father allowed the Sunim to work at the barber shop without saying a word. Once in a while, the father came to the barber shop and asked for a haircut by the Sunim. Although Sunim was young, he learned to sharpen the knife, shave, and cut hair like a professional. After he mastered the barber’s job, he went off to find a new challenge at a place far away from his home.

The Sunim left his home town and found a place called Gu san, Young-dong. In this town, Sunim found work at a tailor shop. It was said that Sunim was the first one to get up and open the shop, cleaned the front of the shop with water, and tidied up the store. Other shop owners came out to open their shop only when the Sunim finished up everything and sat down to rest. In order to open the shutter doors, Sunim had to pass in front of the room of his sleeping owner. The Sunim was so diligent that when he was about to pass quietly in front of the shop owner’s room, the shopkeeper would yell out, “Honey, it is still dark out. Go back and sleep a little more.” in an effort to prevent Sunim from starting his work so early.

Just as he worked at the barber shop and the tailor shop, Sunim experienced all kinds of life at an early age. A distinctive feature of his experiences was that he did not stay in one place for very long. Each time he found a new job, Sunim would master the skill needed and then run off to find a new job without any hesitation. So, what Sunim learned in his life was indeed very colorful. Starting as a barber, he learned to sew, and worked at a shoes factory, bag factory, raincoat factory, a rose farm, insurance company, bus driver, taxi driver, truck driver, and did various other things. In addition to this, Sunim lived the life of an ascetic for more than 10 years at temples. He did supportive work, temple maintenance, farming, wood cutting, building housed, and every kind jobs you can imagine…

When I first came to live under him in Jiri Mountain I felt very surprised at his numerous skills, although I never expressed it. His stitching skills could make one to lose words, his excellent cooking skill, hair cutting skills, construction work, electrical work, and even flower arrangement, there was nothing he could not do. I realized much too late that the reason why he was so perfect at everything was because he lived a very hard life. I felt ashamed of myself to have led such a bountiful life without any difficulties under my parents.

When the Sunim went to the army at a young age, a senior man from the army turned to grab hold of the Sunim’s hand and began to cry. He cried with the words ‘How much you must have suffered to have hands so brutally wrecked...’

Perhaps because of his painful life history, Sunim has an ability to read the minds of people very well. In addition, Sunim also has an amazing ability to sow the seeds of Dharma according to each person’s capacity, which indeed is very sacred. Sometimes he tells a story of his life and say,

“I cut people’s hair, made their clothes, and drove people to where they needed to go… at least, everything that I have done in this life is for the benefit of people.”

If dedication and aspiration prayers are to dedicate one’s merit gained from their selfless service, Sunim’s dedication is even more precious if you were to think about the way he lived his life. Sleeping only a few hours a day, he spent his younger days working by the day and training by the night. How I wish I could be like him