New Year Press Conference of the Executive Director of 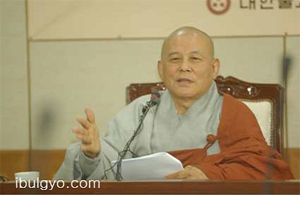 The press conference was held at the Conference Room of the Memorial Hall of Buddhist Culture and History of Korean Buddhism on Jan. 23, 2007. The Executive Director Ven. Jigwan Sunim announced seven major tactical projects and 20 important programs for the year 2007 focused mainly on practice and propagation of the Buddha’s teaching in accordance with the tradition of 1700 years of the Jogye Order of Korean Buddhism. 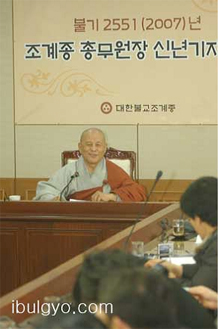 1. Promotion of traditional meditation practice of the Order.
2. Restoration of harmony and livelihood of the Sangha and transfer of some of the administrative powers to the District Head Temples according to the new policy of decentralization of the administrative system of the Order.
3. The youth propagation program, constructions of the meditation center in the rapidly growing areas in the big cities and the Center for Traditional Buddhist Culture and its operation.
4. Popularization of Ganhwa Seon or meditation practice and construction of International Ganhwa Meditation Practice Center at Jegye Temple in Seoul.
5. English translation of the traditional Korean thoughts, Buddhist tracts, and Dharma speeches of the great Korean priests for the globalization of Korean Buddhism, constructions of the Meditation Centers in the residential areas of Koreans in the overseas and the welfare Town in Sri Lanka. The restoration of Bhikkuni Sangha in the South-east countries is another important project.
6. Completion of Sin-gesa (temple) in the North Korea and support of South-North civil cooperation programs.
7. Opening of the Central Buddhist Museum and a special exhibition program on March 26, 2007, and reconstruction of the building for the Buddhist Newspaper and the Central Korean Buddhist Association of Laity.