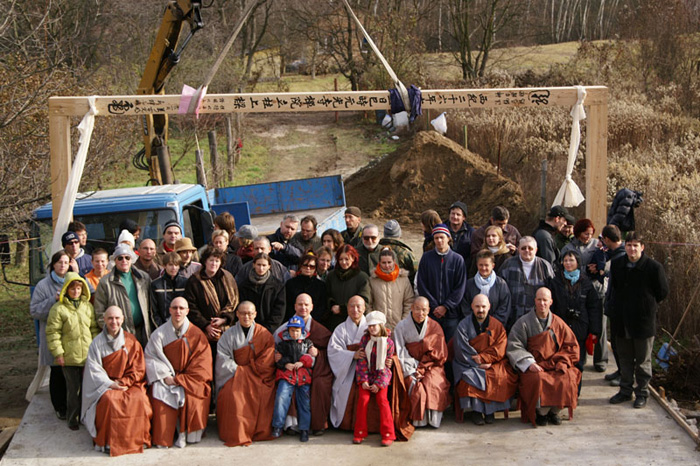 Putting up of the ridge-beam ceremony of the traditional Korean temple was held near Budapest in Hungary on November 11. There were about forty participants including many sunims from Korea lead by the Head Master Seoljeong Sunim, Hyeongak Sunim, the Director of Seoul International Zen Center  at the Hwagesa Temple in Seoul and others.

The construction of Wonkwangsa Temple was initiated by Cheong-an Sunim who has been operating Kwanum Monastery in Budapest since 2000. Cheong-an Sunim’s plan is to purchase about one acre of land near Budapest by 2007 to construct Seon monastery, and then purchase more land around the monastery so that he can continue the expansion of the monastery.

Seoljeong Sunim, the Head Master of Hwagesa Temple in Seoul, who wrote the record of the construction of the temple on the ridge-beam, wished that this temple would be the center of the Korean Buddhism in Europe. In his reply to Seoljeong Sunim’s congratulatory address, Cheong-an Sunim emphasized that one of the best ways to introduce the Korean Buddhism to Europeans is the construction of the traditional Korean style temple, and he sincerely hoped that many Korean Buddhist brothers to have more attention to his project.