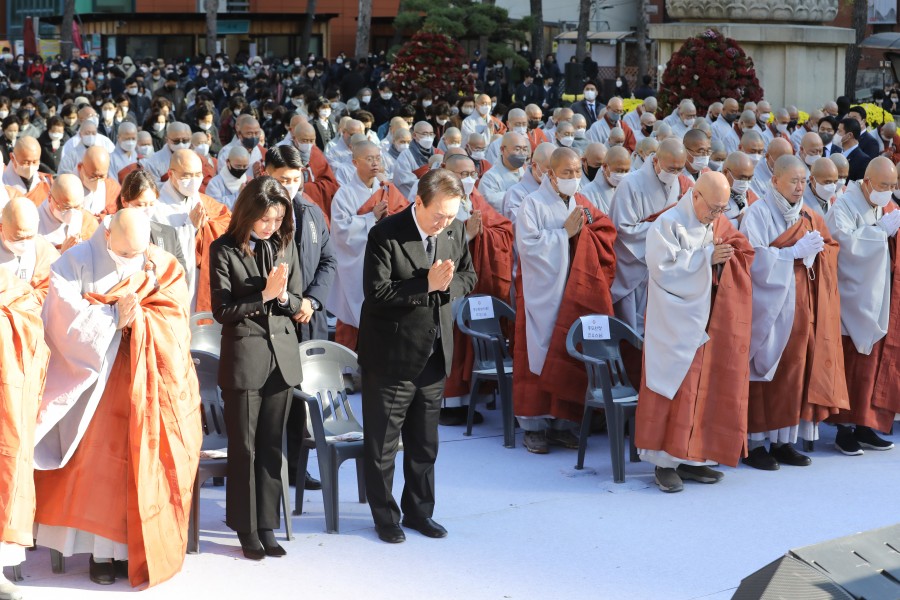 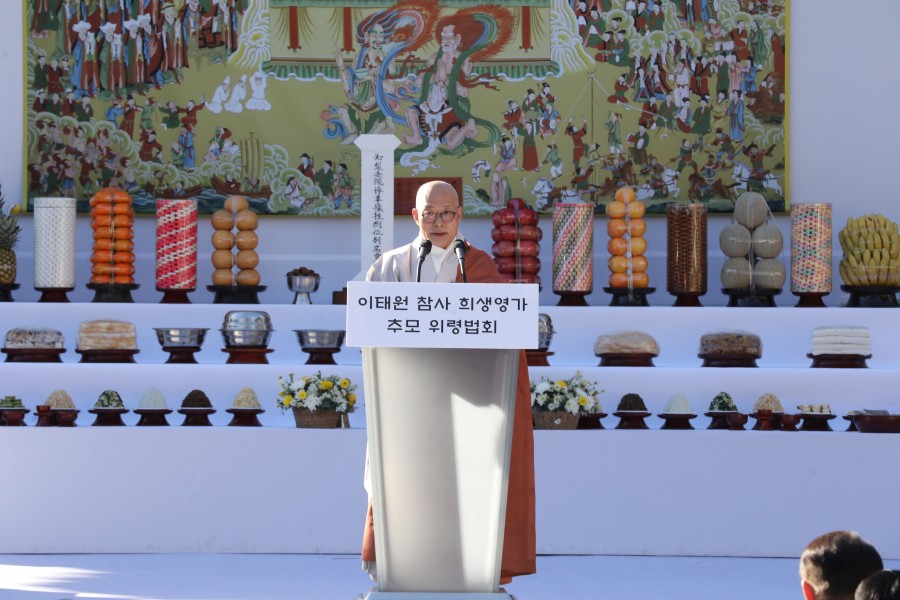 The sound of ardent chanting reverberated Jogye-sa Temple as the monastics prayed to guide the victims of the Itaewon tragedy to the Western Paradies of Eternal Bliss, lamenting the deaths of the young people who lost their precious lives in the deadly crowd crush amid Halloween festivity.

On November 4, 2022, the Jogye Order of Korean Buddhism (President: Most Ven. Jinwoo) officiated a Dharma assembly to mourn the victims who died in the Halloween crush in Itaewon. President Yoon Suk-yeol and First Lady Kim Gun-hee attended the ceremony held in the forecourt of the Jogye-sa Temple in Seoul to join the monastics with the aspiration to create a society that champions the sanctity of life.

The ceremony started with the traditional Buddhist ritual of solemnly taking refuge in the Three Jewels of the Buddha, Dharma, and Sangha. Most Ven. Jinwoo, President Yoon, and the first lady laid flowers on the altar for the deceased, followed by the burning of incense performed by Ven. Jeongmun, the chair of the Central Council, Ven. Bogwang, the chief of the Tribunals, Ven. Beomhae, the head of the Dharma Propagation Bureau, Ven. Chogyeok, the vice-chair of the Association of the Abbots of the Headquarters Temples, and Ven. Hosan, the director of the General Affairs Office.

“We burn incense and lay flowers for the souls of the young people who lost their precious lives in the Itaewon disaster,” said Most Ven. Jinwoo, the president of the Jogye Order in a condolence speech. “We offer the most heartfelt condolences to the victims’ families who must be in unimaginable agony grieving the deaths of their beloved sons, daughters, sisters, and brothers.” He also mourned the deaths of the foreigners who died in a faraway country away from their homes.

“Whenever Korea is shaken by a disaster, the country’s leadership has promised that such a tragedy would not happen again, but their promise has been proven empty as it is broken yet again,” deplored Most Ven. Jinwoo. “It was even more tragic because it was entirely preventable if only we had cared just a little bit more, if only we had paid just a little bit more attention.” He stressed the importance of focusing on fundamentally reforming Korea’s disaster prevention system after the period of mourning is over, to establish multiple layers of iron-clad social safety networks to best protect the citizens’ lives.

“The Buddhist community accepts full responsibility for supporting the bereaved families and praying for the souls of the victims. We will do our utmost to fulfill our social responsibilities,” said the president of the Jogye Order. “We will not rest until the sanctity of life becomes the priority of Korean society and the younger generation can live in the hope that their dreams will come true in the future. We will not rest until peace reigns on this land where a smile blooms on everyone’s face. It is important to understand that one of the best ways to facilitate the victims’ rebirth in the Buddha’s Pure Land is committing ourselves to do our best to prevent such a disaster from ever happening again.”

“I am overwhelmed by sorrow and remorse, for as the president of this country I am ultimately responsible for ensuring the safety of its citizens and protecting their lives,” said President Yoon Suk-yeol delivering the condolence message. “I would like to take this opportunity to thank the Buddhist community and the eminent venerables whose vast compassion and wisdom offer such comforts to the grief-stricken society.”

“My heart is with the bereaved families, and I offer sincere words of condolences although no words of comfort can truly ease the pain of the parents who lost their children,” said the president of Korea. “I am well aware that it is my responsibility to lead the government in tying up all the loose ends and ensuring such a disaster would never happen again.” He promised that “the government will be most thorough in providing full medical care for the surviving family members as well as for those who were injured in the crowd crush until they are fully recovered.”

Ven. Donghwan dedicated a song to the victims of the Itaewon crush and prayed for their rebirth in the Buddha’s Pure Land, singing, “How sad to die on the street leaving all the people you love behind. We now dedicate this memorial service with all our hearts so that you can let go of all regrets, anger, pain, and sorrow and move on to paradise.”

“The whole country is heartbroken, weeping bitterly over the loss of the precious young lives, the flowers that fell before their time,” lamented the chair of the National Bhiksuni Association Ven. Bongak, who read the letter of aspiration on behalf of the four-fold community to wish for the swift recovery of the injured and the rebirth of the victims in the Buddha’s Pure Land. “We lost so many young people at once when even the loss of one life is already one too many. We most ardently and sincerely repent our parts in this tragedy in front of the Buddha before blaming others.”

“We are guilty of being complacent, of thinking this did not concern us.” Said Ven. Bongak. “We do not know how we can overcome this profound sorrow. All we can do is keep praying and repenting.”

“We pledge to work every day to create virtues with our actions, words, and intentions so that we can dedicate them all to the people who lost their lives in this tragedy. By the merit of our dedication, may the victims’ souls let go of all their suffering and be joyful. May Korea be reborn as a country where the sanctity of life is upheld and the citizens cherish each other,” said Ven. Bongak.