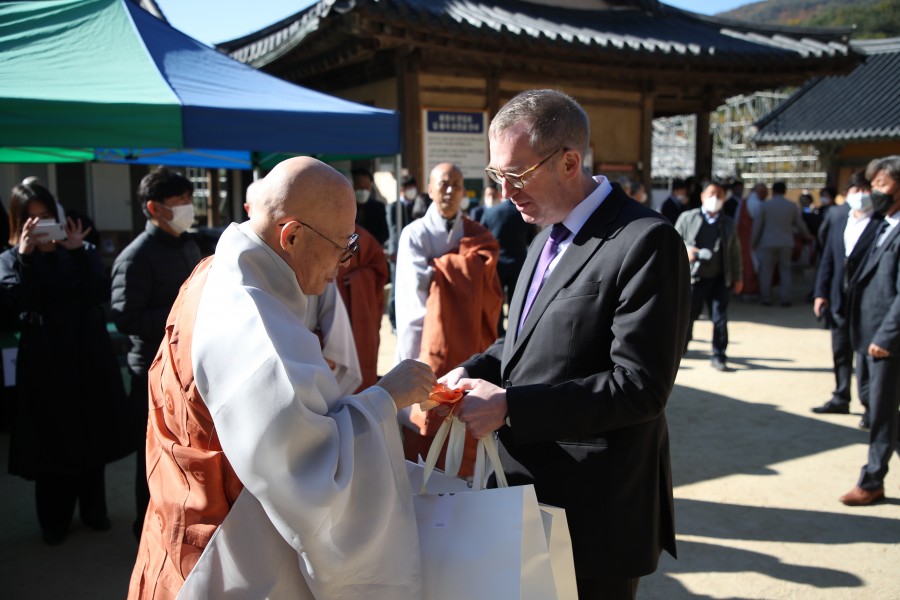 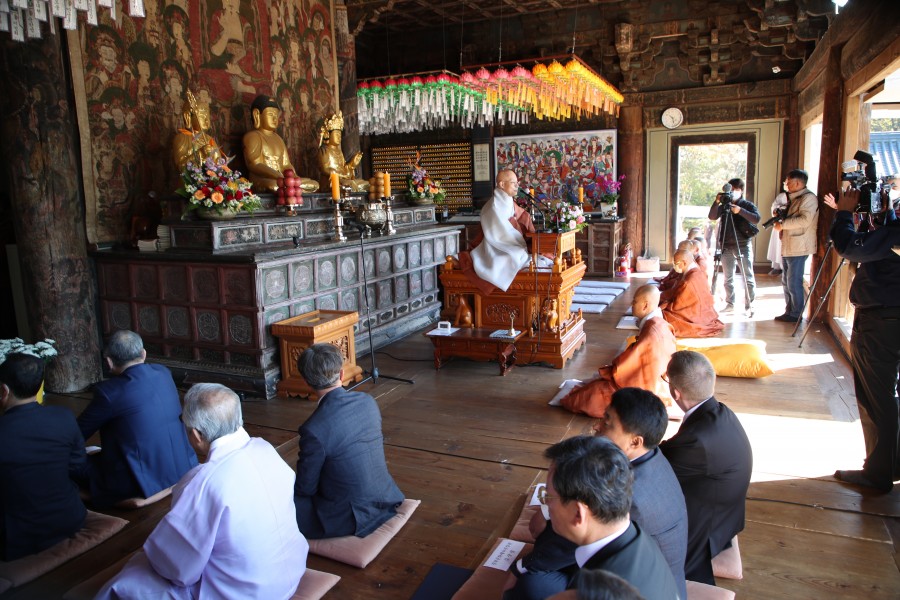 The 49th-Day Consolation Ceremony for Her Late Majesty Queen Elizabeth II was held at Bongjeongsa, a temple in Mount Cheondeung in the city of Andong, which is a UNESCO World Heritage site. The ceremony took place on October 26th at 10 A.M.Her Majesty Queen Elizabeth II, who passed away last September 8th, had stopped by the temple back in 1999 during her official visit to the Republic of Korea. To honor her visit to Bongjeongsa, the ceremony was held to praise the late Queen’s honorable deeds and to pray for her repose. Notable attendees included Venerable Jinwoo, the President of the Jogye Order; Venerable Hoseong, the Elder of Bongjeongsa; Venerable Deungun, the Abbot of Gounsa; Venerable Neungjong, the Abbot of Donghwasa; Mr. Colin Crooks, the British Ambassador; Kichang Kwon, the Governor of Andong City; Yunjo Ahn, the President of the Lay Buddhist Association of Bongjeongsa, and many other fourfold assembly members. The ritual commenced with the recitation of “The Three Refuges,” and the standard Buddhist memorial ceremony, followed by tea and incense offerings, a dharma talk, and offerings of flowers.

As the first official order of business for the newly-appointed president since his inauguration outside of the capital city of Seoul, Most Venerable Jinwoo remarked, “The ceremony of the 49th-Day Consolation is the greatest gift of compassion that the Buddhist community can offer to the spirit of the Late Queen,” and “I hope that this occasion will cement many years of friendship in the future between our two countries – the United Kingdom and the Republic of Korea.”

Venerable Hoseong, the Elder of Bongjeongsa, recalled in the eulogy, “At her official stay to the country, she wanted to see the place that best represented Korea. Her Late Majesty commented, ‘In the peaceful temple Bongjeongsa, I met spring in Korea,’ when visiting us at the temple.” He also added, “That encounter led to another visit from Prince Andrew, back in 2019.” “The reason for holding this consolation ritual is not only to pay tribute to her noble deeds, working toward world peace, but also to honor her role in strengthening the friendship between our two countries, as well as to pray for her admission into the Pure Land, the world of utmost joy without suffering,” the Elder stated.

Mr. Colin Crooks, the British Ambassador to Korea, responded, “When visiting the temple 23 years ago, Her Late Majesty Queen Elizabeth II experienced Korean traditions and came to love and respect the Korean culture.” He also mentioned, “It is my great honor to attend the ceremony today. I would like to express my gratitude towards many of the officials from the Jogye Order,Gyeongsangbuk-do Province, and Andong City for holding the ritual to pay tribute to Her Late Majesty Queen Elizabeth II.”