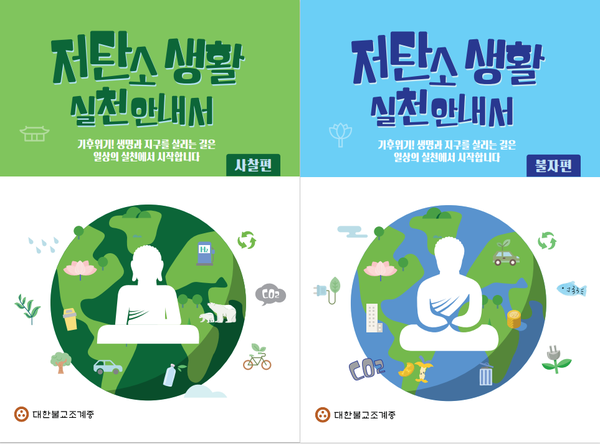 What can the Buddhists do to achieve carbon neutrality and at the same time put into practice what the Buddha has taught? As the state of the climate emergency has been declared worldwide, we now have a book that teaches us how to do our bits to save the earth.

The Jogye Order of Korean Buddhism (President: Most Ven. Wonhaeng) has published a guidebook titled “How to Live a Low-carbon Life” to encourage its temples and temple-goers to proactively respond to the climate crisis. There are two versions of the guidebook, one for the temples and the other for lay Buddhists.

The guidebook for temples introduces practical ways to reduce greenhouse gas emissions that may be generated from operating the temple and the temple’s events, how to run net-zero campaigns and training, and manage the forest around it and the kitchen gardens. Included in the appendix are the climate-related materials to be used for Dharma talks and the government-sponsored programs for carbon reduction. The version for lay Buddhists explains how each of them can tackle in their home life the carbon-releasing processes associated with energy and material consumption and transportation, and how they can boost resource recycling and carbon sequestration.

Both versions have chapters on climate change, a Buddhist take on this global phenomenon, and the low-carbon life checklist. As a gesture of commitment to an eco-friendly lifestyle, the guidebook was printed with soy-based ink.

The Jogye Order will distribute “How to Live a Low-carbon Life” on All-Souls Day, and the guidebook can also be downloaded from the Order’s homepage (www.buddhism.or.kr) for free. The Order is currently producing a video on how to shift the paradigm of life to overcome the current climate disaster, and sponsoring climate-related lectures in 12 Buddhist colleges across the country. It also publishes Dharma talks on climate change four times a year to facilitate increased awareness and commitment regarding this issue.

“It is high time for the temples and their congregations to commit themselves to the global scale endeavor to reduce carbon dioxide emissions to curb the greenhouse effect and disseminate the Buddha’s wisdom teachings to readjust humanity’s value system at a fundamental level,” said the Jogye Order. “We hope that this booklet will contribute in a small way to bringing life back to earth.”