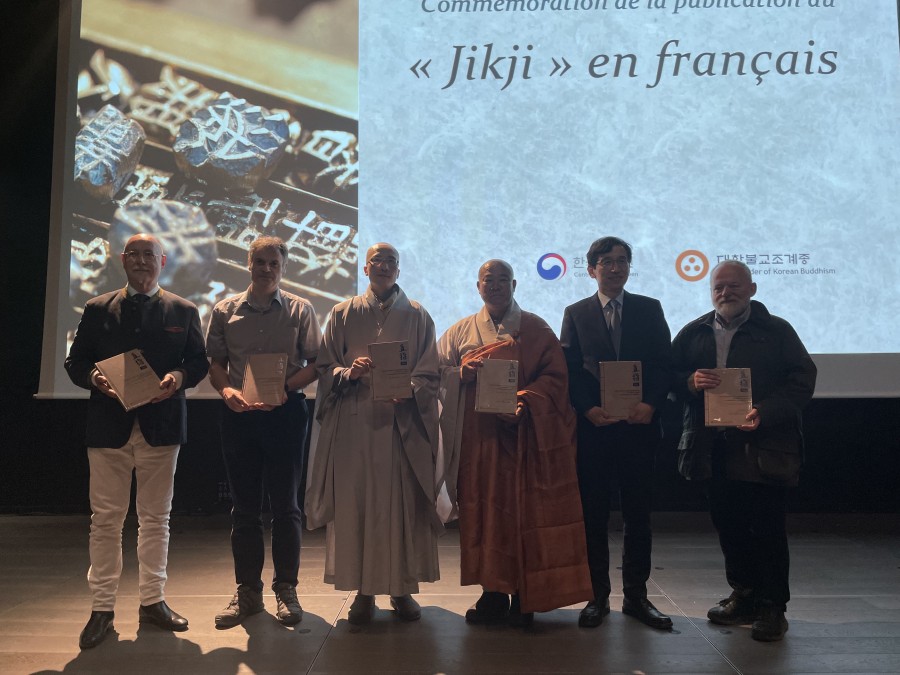 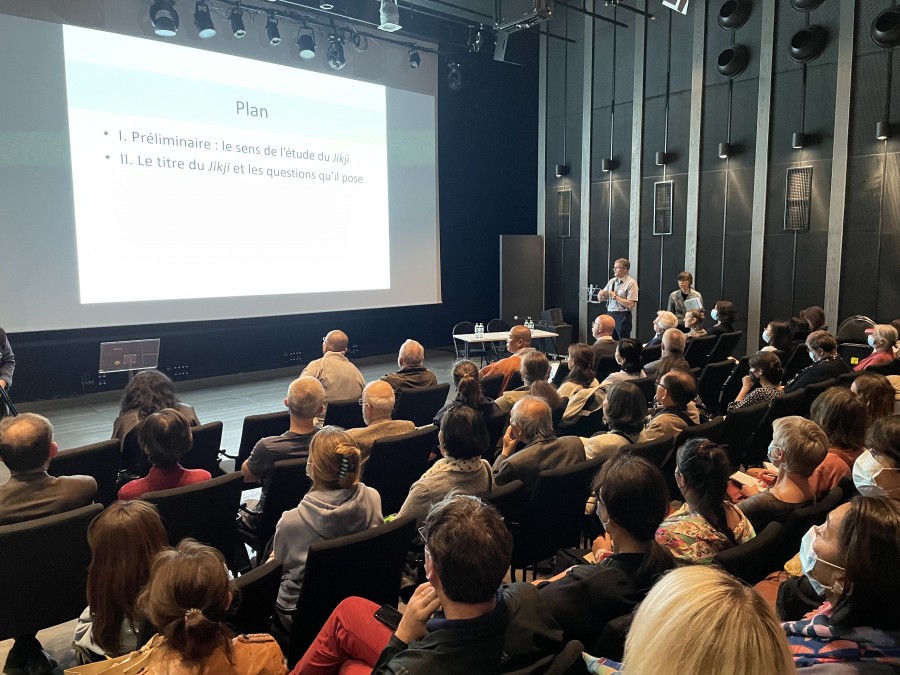 Events celebrating the release of the Jikji’s French edition, including a public lecture, held in France on May 25

The Jogye Order of Korean Buddhism (President: Most Ven. Wonhaeng) hosted a book release event and a public lecture to mark the publication of the French translation of Jikji simche yojeol, or Jikji, Essential Passages Directly Pointing at the Essence of the Mind, which served as an occasion to inform the French public of Seon Buddhism and its philosophy contained in the book.

The event started at 6:30 pm on May 25 at the Korean Culture Center in Paris with Ven. Hyewon as the master of ceremony. About 100 people attended the event, including Ven. Seonggong, the director of the Cultural Affairs Office of the Jogye Order, Mr. Jeon Hae-ung, the head of the Korean Culture Center in France, Laurent Hericher, Chef du Service des Manuscrits Orientaux (Chief of Service for the Oriental Manuscripts Department) at La Bibliothèque nationale de France (BnF), Jérôme-Cécil Auffret, a documentary film maker, and Yannick Bruneton, a professor at Université de Paris who translated Jikji into French.

Ven. Seonggong, the director of the Cultural Affairs Office, read the preface of the Jikji’s French version on behalf of the Jogye Order of Korean Buddhism, saying, “It is in France that Jikji was first brought to worldwide attention, so the publication of the Jikji’s French version has a particular significance. It will serve as a true north to direct global citizens, regardless of their religion, toward the true happiness in life.”

Mr. Jeon Haeung said in his congratulatory remark, “Now the French readers can access the wisdom contained in Jikji, which will go a long way in further developing the Korean studies in France.”

Following the publication event, Professor Yannick Bruneton, the translator of the Jikji’s French edition, gave a lecture on Jikji to the 100-strong crowd. He introduced Jikji as a “classic textbook on Seon Buddhism,” which carries a message of hope that everyone can attain enlightenment without exception. After the lecture, the audience had a chance to ask questions about the technologies involving the printing of Jikji as well as its textual interpretations.

Before the event was held, the Jogye Order delegation visited La Bibliothèque nationale de France (BnF), Musée national des arts asiatiques Guimet, and Permanent Delegation of the Republic of Korea to UNESCO and donated the French edition of Jikji to these institutions. The Order hopes that the publication of the French edition will serve to boost exchanges with the French philosophical and academic circles as well as promote Jikji’s bibliographical significance as the world’s oldest extant text printed with movable metal type and its soteriological values as a foremost Seon Buddhist text.

In addition, a viewing of the documentary “Jikji, un Voyage dans le Temps de l'Écrit (“A Journey Through the Time of Printing”)” was organized by the Korean Culture Center in France at 7 pm on May 27. Professor Yannick Bruneton contributed to this film project as well as one of the scriptwriters. Co-produced by France and Korea, the documentary marked the 20th anniversary of Jikji’s inclusion in the UNESCO’s Memory of the World Programme.

The Jogye Order plans to further the cooperation and exchanges with various academic and diplomatic institutions such as BnF and the Korean Culture Centers in French- and English-speaking parts of the world, letting the wider public know about Jikji as an important world cultural heritage.