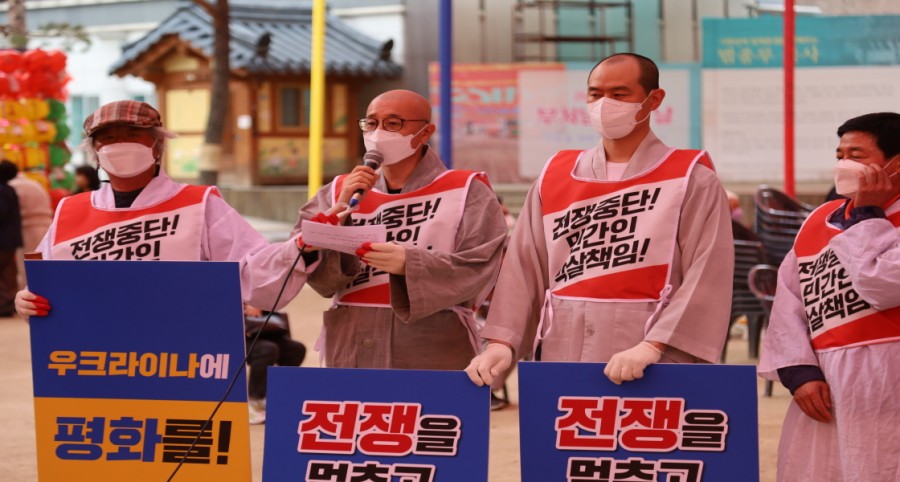 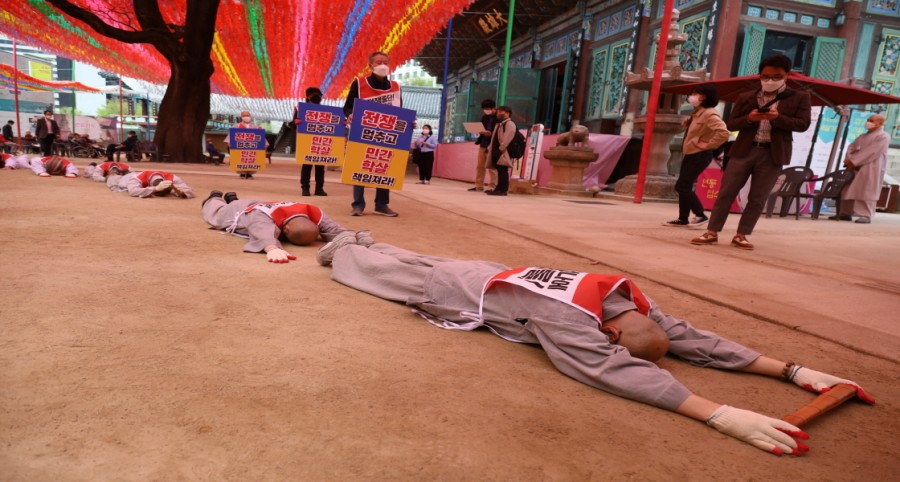 Prostrating and marching through downtown Seoul

On April 12, Buddhist monastics and human rights activists marched through downtown Seoul by prostrating on the streets to stop the war and bring peace to Ukraine, prompting much interest from the public.

Seven Buddhist monks from the Social and Labor Committee of the Jogye Order of Korean Buddhism started prostrating in the forecourt of Jogye-sa Temple’s main Dharma hall by lowering their bodies and stretching their full length on the ground. They marched one prostration at a time to ask the world to join in their ardent prayer to end the war of aggression committed by Russia and restore peace in Ukraine.

The laid-off workers of Asiana KO, a subcontractor of Asiana Airlines, who have been staging a hunger sit-in to demand their reinstatement, also joined the march with the pickets as well as the immigrant laborers’ union to support the peace rally.

Following the sound of Ven. Jimong’s bamboo clapper, the participants prostrated, stood up to walk three or four steps forward, and then stopped and prostrated again until they reached the Russian Embassy in Jeong-dong, Seoul.

Ven. Jimong, the head of the Social and Labor Committee, said before starting the march, “It has been 48 days since Russia invaded Ukraine and all sorts of atrocities against humanity have been committed there amid the horrors of the war.”

He continued by saying, “No one truly wins in a war, as the war’s only heritage is ever-deepening hostility and hatred. Through today’s protest, we declare ourselves on the side of the Ukraine people. We ardently pray that the peace will be restored so that the Ukraine people can have their hopes and dreams for the future back.”
The Buddhist monks from the Social and Labor Committee of the Jogye Order of Korean Buddhism took to the street and marched by prostrating to protest against social injustice such as human rights violations, discrimination of minorities, and wars. Last year, they marched six kilometers by prostrating on the street to protest against the coup détat and the massacre of civilians by Myanmar’s military junta.
Dreaminus, the international aid organization under the auspice of the Jogye Order of Korean Buddhism has started a fundraising campaign to extend the Buddha’s compassion to the refugees of the war fleeing Ukraine, wishing for a world where everyone can live together on the Buddha’s Pure Land.