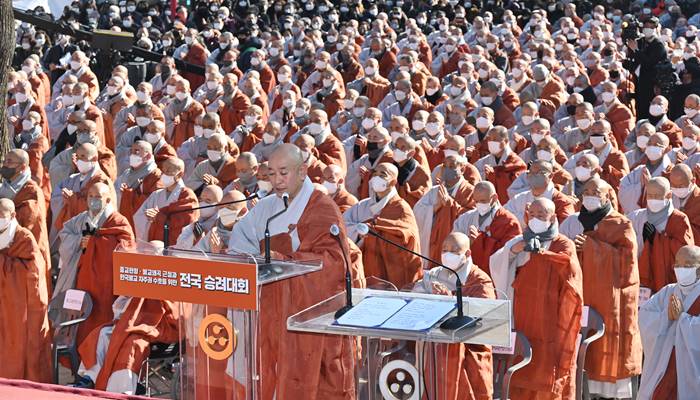 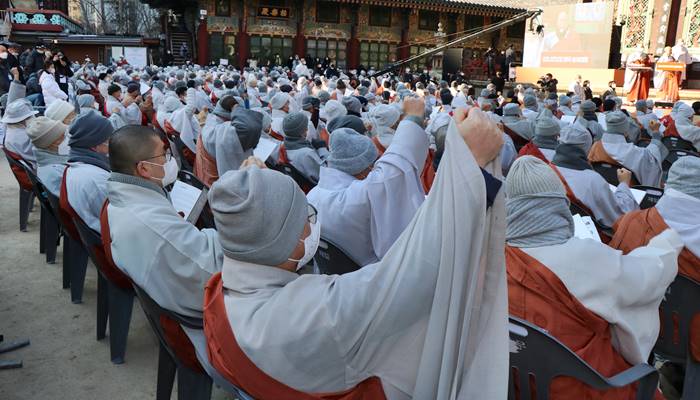 The banner to right the wrong and uphold true Dharma raised.

Most Ven. Wonhaeng said, “It is high time that we go beyond discord and discrimination and achieve unity.”

Attempt to apologize by the top government official and politician failed.

5,000 monks and nuns from all over the country gathered for the National Monastic Assembly held at Jogye-sa Temple on January 21 to sternly reprimand the Moon administration\\'s biased policies and slanders against Buddhism and resolutely uphold the sanctity of Korean Buddhism. The freezing weather that warranted cold wave warnings could not break the righteous will of the monastics to defeat evil and defend true Dharma.

President Moon Jae-in expressed remorse for his religious favoritism and bias for the first timeand the leader of governing Democratic Party of Korea also bowed his head in apology.

A great assembly of monks and nuns thronged the Jogye-sa ground, which included Most Ven. Wonhaeng, the president of the Jogye Order, the abbots of headquarter temples and their branch temples, Seon monks in winter meditation retreat, and students monks attending Sangha seminaries. The representatives of 30 Buddhist orders that belong to the Association of Korean Buddhist Orders also joined the rally, protesting against the state’s outrageously prejudiced treatment of Buddhism.

The National Monastic Assembly opens with the simultaneous beating of Dharma drums and tolling of Brahma bells precisely at 2pm at all Buddhist temples across the country. After taking refuge to the Three Jewels and chanting the Heart Sutra, Ven. Jihyun, the abbot of Jogye-sa Temple offered a prayer to Buddhas and Bodhisattvas on behalf of the assembly, saying, “President Rhee Syngman, in collusion with the United States Army Military Government in Korea (USAMGIK), conspired to diminish the influences of traditional Korean culture, especially those of Buddhism and implemented blatantly discriminatory measures against them, and such bigotry still affects the Korean government’s attitude toward Buddhism. We therefore disregard the frigid weather in the dead of the winter and officiate the solemn and noble ritual of the Monastic Assembly to surrender our physical body for the sake of true Dharma, defeat evil and defend the Truth. May the move we are making today serve as a stepping stone to have our damaged dignity and honor restored and to achieve inter-religious harmony and respect.”

Following Ven. Jihyun’sprayer to Buddhas and Bodhisattvas, the assembly chanted themantra of contrition 108 times to atone for the current Sangha’s failure to succeed and live up to the 1,700 years of brilliant history of Korean Buddhism and its ancestors and for allowing the rot of discrimination and distortion against Korean Buddhism tospread and fester.

Most Ven. Wonhaeng, the president of the Jogye Order who was in charge of organizing the National Monastic Assembly said, “The monastic Sangha did not gather in this solemn assembly not to advance the interest of the Buddhist community but to defend Korea’s traditional cultural heritage. It is a cry for a society free from prejudice and discrimination, for a better future not hamstrung by unjustifiable biases. It is a struggle to right the wrong and uphold the virtuous. Today, we gather to remove the dark shadow of discrimination, conflicts, and polarization cast over the future of Korea and whip up a grand wave of harmony, unity, and mutually beneficial co-existence by rallying for the legislation of the Anti-discrimination Law and the establishment of the system to prevent the abuse of governmental authority by political powers to further the interests of a specific religion to the detriment of the others.”

H.E. Master Jinje, the Supreme Patriarch of the Jogye Order said in his message read by Master Semin, daejongsa, the chair of the Elder’s Council, “All Buddhists should unite into one body and mind to spread Buddha’s Light of Wisdom and Compassion throughout the whole world. As all sentient beings get together in harmony, the fragrance of the Dharma blooms and reaches the far corners of ten universes.” Through his message, Master Jinje encouraged the monastics to use the occasion of the National Monastic Assembly as an opportunity to overcome the religious conflicts plaguing Korea and raise the banner of unity and harmony.

Ven. Deokmun, the chair of the Abbots Association of the Jogye Order’s Headquarter Temples said in his speech to the Assembly, “We can no longer afford to sit back and allow our dignity trampled on. It is time to join the flag of true Dharma to champion the sanctity of Korean Buddhism and defend the Noble Sangha.” Ven. Dogak, the secretary-general of the Association of Korean Buddhist Orders also urged the assembly,“not to “rely on the government officials and politicians to ensure our religious rights but rather to be martyrs on the righteous path of Dharma to fight evil and side with good in the same way the monastics are taught to ‘take one more step from the tip of a hundred-foot pole’ in their spiritual practice.”

Ferociously indignant, the assembly moved to condemn the slandering of Buddhism and the skewed views of the government and call for systematic reform.

Ven. Seongwang, the chair of the Special Committee Against Religious Bias under the Central Council of the Jogye Order said in his statement, “by discriminating against and slandering Buddhism, the government is dooming Korea’s future by demeaning its history, destroying its traditional culture and inciting social discord.” He demanded that President Moon Jae-in should, “make an apology; implement measures including the legislation of the Anti-discrimination Law to fundamentally guarantee the separation of state and religion, and; urgently establish measures to ensure the sound preservation and robust transmission of traditional cultural heritage.”

The government’s attempt to deliver an apology to the Assembly on the scene, however, was in vain due to the fierce protest of the crowd. Ven. Deokmun, the chair of the Abbots Association of the Jogye Order’s Headquarter Temples made an unscheduled appearance on the platform, saying, “The ruling party has begged for a chance to explain its position, and as such, the organizers including Most Ven. Wonhaeng had an emergency meeting and decided to grant the government its request. We seek your compassion in allowing conversations to open up and trying to resolve differences of opinion peacefully.”

Then, the video of Hwang Hee, Minister of Culture, Sports and Tourism offering an apology appeared on the screen. However, the video was cut short as the monastics strongly expressed their disapproval. When Song Yeong-gil, the leader of the ruling Democratic Party of Korea tried to come upon the platform and apologize in person, some of the outraged monastics even threatened to leave the Jogye-sa temple ground, which put a stop to his attempt, indicating that the antagonism in the Buddhist community against the government and the ruling party runs far deeper than expected.

After some moments of confusion, the organizers returned to the scheduled program and Ven. Bongak, the chair of the National Bhiksuni Association closed the meeting by reading a vow on behalf of the assembly. Ven. Bongak vowed to, “raise the flag to right the wrong and uphold the good and ferociously and unwaveringly practice until the sanctity of life is equally recognized for all livingbeings; harmony and unity rules this world instead of conflict and discord, and; freedom of religion is wholly restored and the distortion of history fully corrected.”