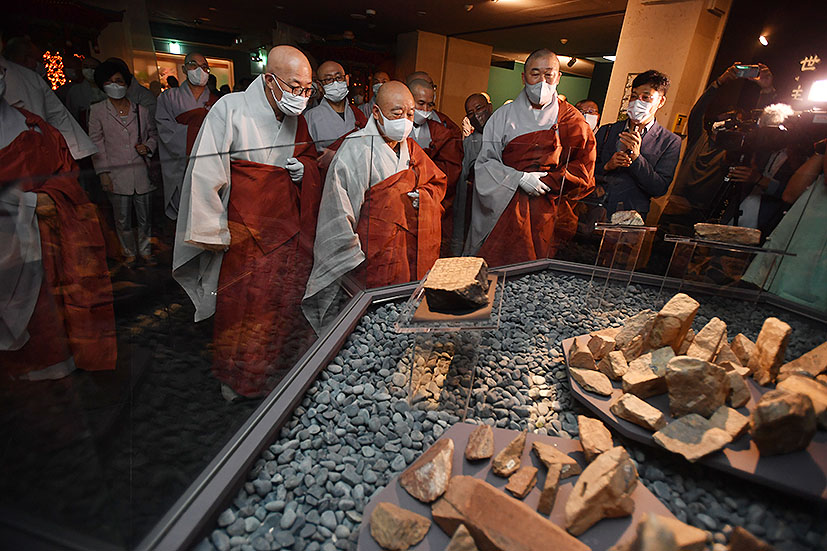 Honored guests including Most Ven. Wonhaeng, the president of the Jogye Order of Korean Buddhism, paying homage to the Avatamsaka Sutra inscribed on stone tablets.

The Central Buddhist Museum under the auspice of the Jogye Order of Korean Buddhism (Director: Ven. Tantan) holds a special exhibition titled the Sacred Treasures of Grand Flower Garland from Hwaeom-sa Temple in Mt. Jirifrom September 14 to November 14, 2021. It is the 4th event of its kind where the Museum hosts the sacred treasures from the Jogye Order Headquarters Temples.

The Central Buddhist Museum unveiled the special exhibition on September 13 at the opening ceremony and presented to the public in Seoul the full majesty of the sacred cultural heritage of Hwaeum-sa Temple in Mt. Jiri, the 19th Jogye Order Headquarters Temple.

The special exhibition features 265 paintings and objets d’art, including two National Treasures, two Treasures, and two Tangible Cultural Assets. Some of the artworks are made available for public viewing for the first time, such as the treasure hidden inside the Wooden Vairocana Buddha Triad Statue (designated as a National Treasure), the scrolled paintings of the Vairocana Buddha Triad enshrined in the Main Dharma Hall (designated as a Treasure), the West Five-Story Stone Pagoda (designated asa Treasure),thereliquaryfound inside the East Five-Story Stone Pagoda, and the ceremonial robes worn by Masters Seosan and Beokam. The highlight of the exhibit, however, is the Avatamsaka Sutra carved on more than 14,000 stone tablets (designated as a Treasure).

The White Porcelain Jar Decorated with Pine and Bamboo Patterncirca 1489, designated as a National Treasure and considered one of the finest examples of its kind, was also part of the exhibit. This masterwork of an altarpiece at Haweom-sais side by side with the large bronze cymbals (a Treasure) used as aDharma instrument at Taean-sa Temple in Gokseong, bearing witness to the magnificence of Dharma rituals during the Joseon period. The Vairocana Triad thangka, consisting of three pieces of 4.4 m long scrolled drawings (a Treasure) will be on display in the lobby of the Korean Buddhist History and Culture Memorial Hall, one piece at a time.

Hwaeum-sa Temple, located in Guryeo, Jeollanam province, was founded about 1,500 years ago in 544 by an Indian monk named Yeongi. Most Ven. Wonhaeng said in the opening speech, “The philosophy of the Avatamsaka Sutra is relevant more than ever to the modern people as it expounds on the unity of all beings, how we must bring down the walls separating you from I. I hope this exhibition will serve as an opportunity for all of us to realize our true nature and find the same truth in all beings as well.” 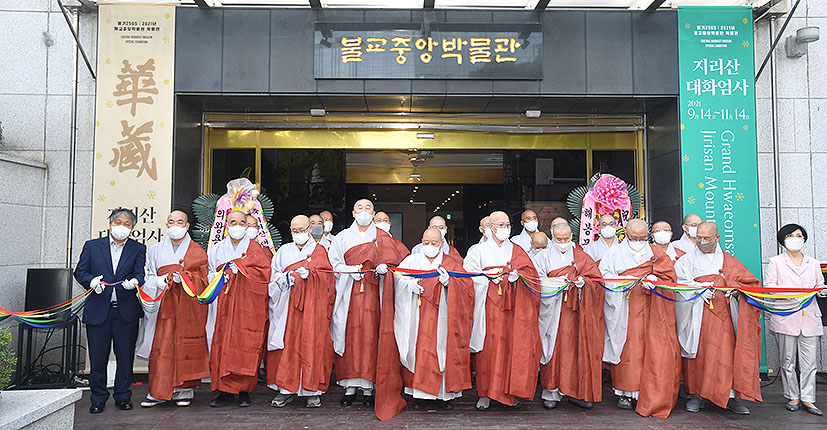 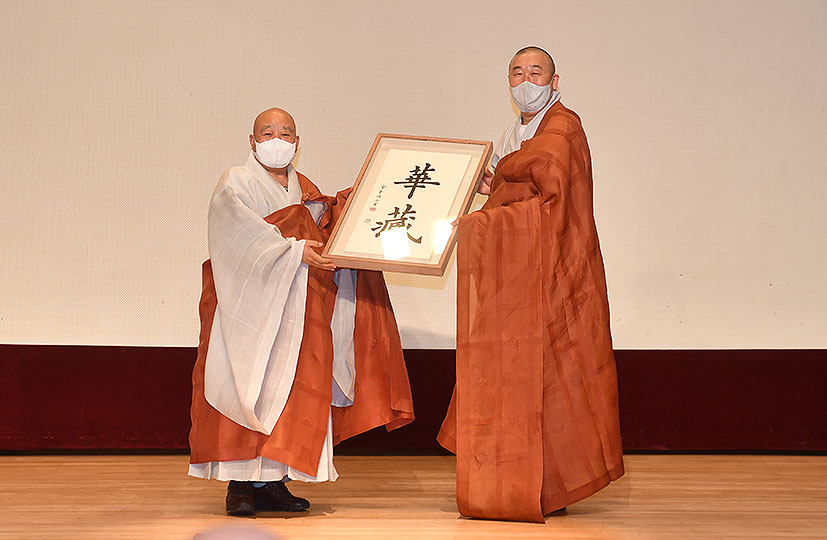 Ven. Deokmun, the abbot of Hwaeom-sa Temple, presenting a calligraphy scroll as a gift to Most Ven. Wonhaeng, the president of the Jogye Order (left) 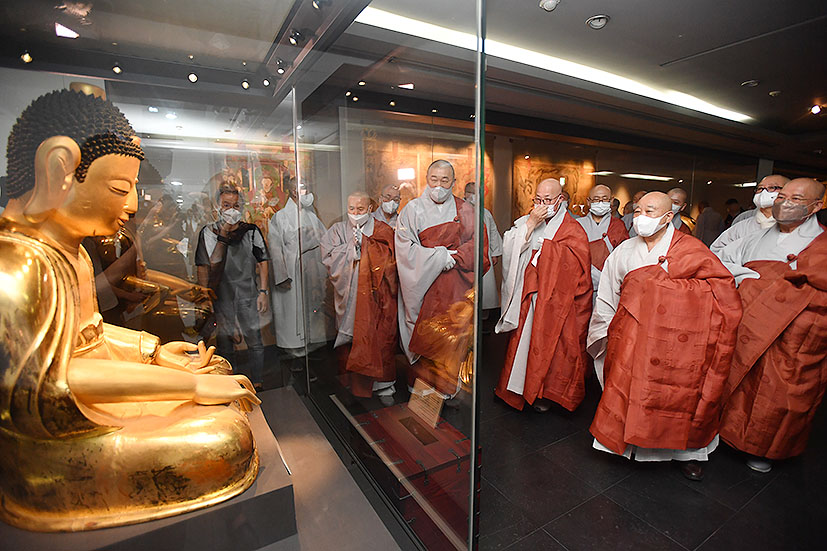 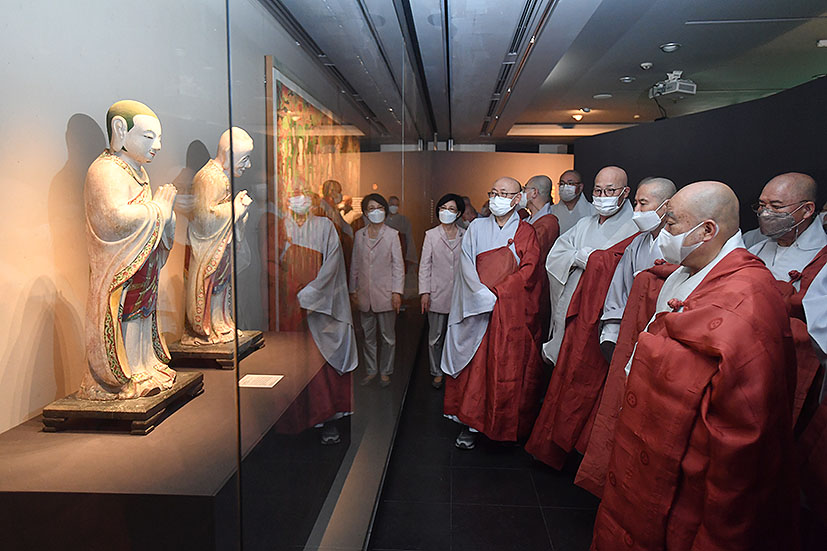 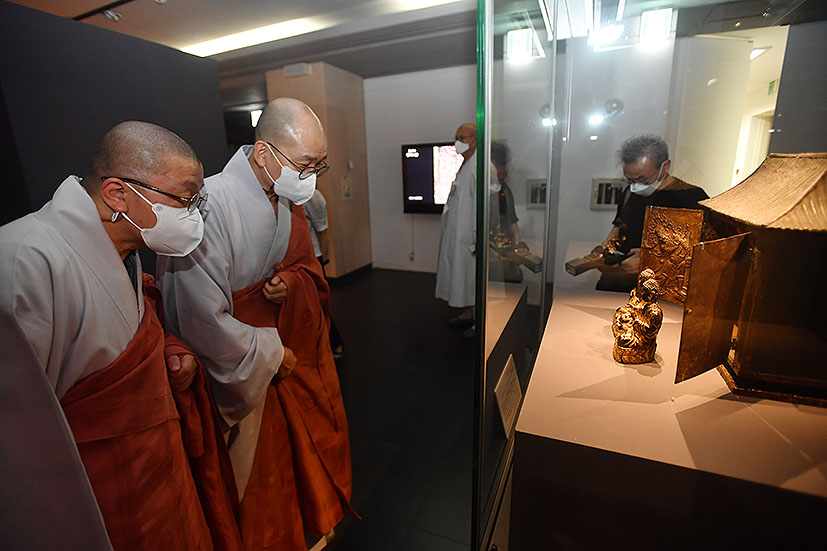 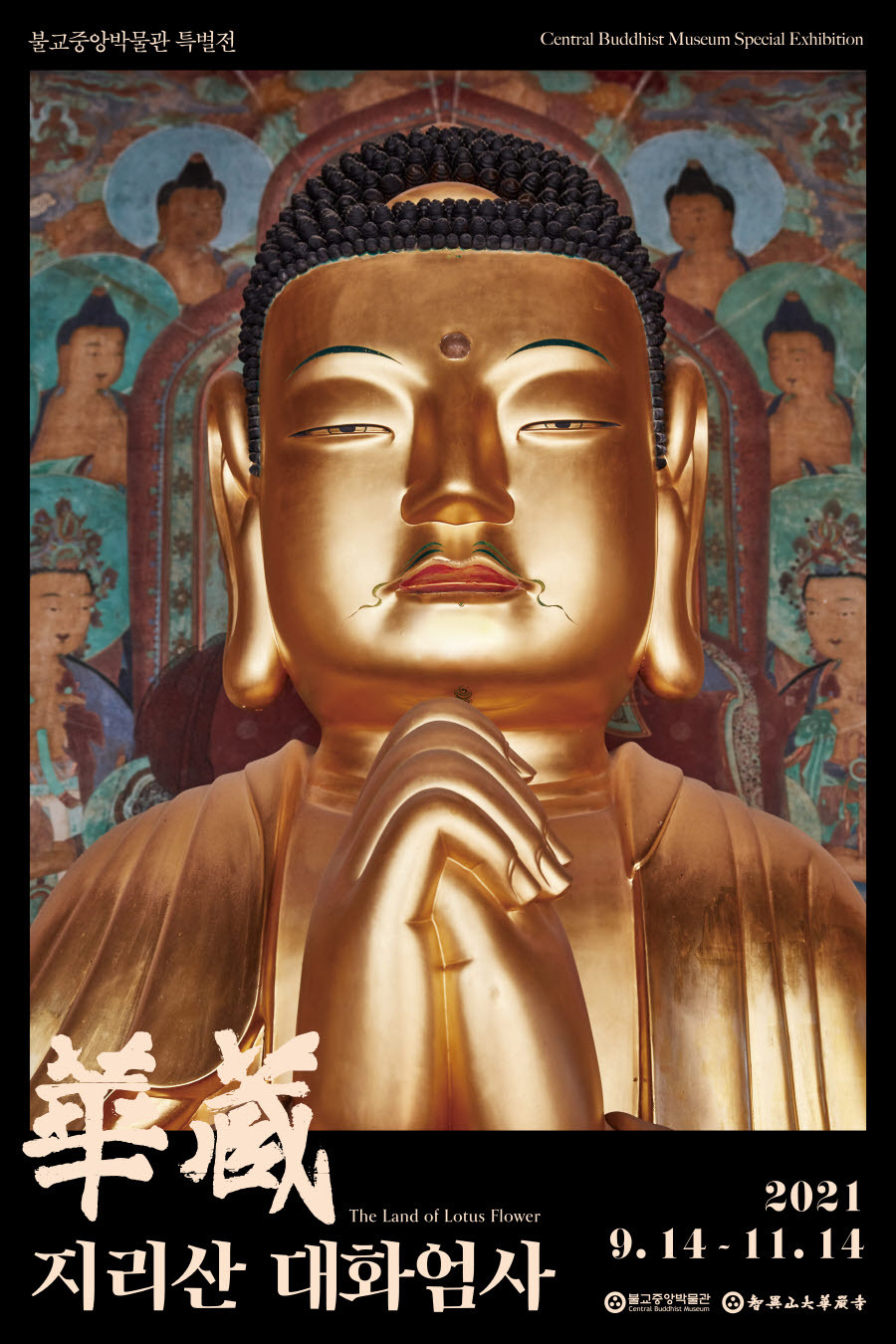