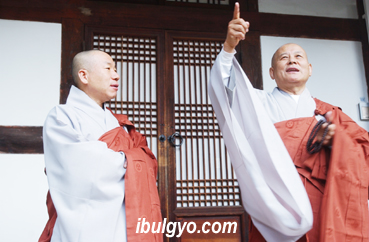 Ven. Jikwan, chief of Jogye Order of Korean Buddhism, held a press conference to mark the 1st year of his tenure on November 9th at a conference room on the 4th floor of the Korean History and Culture Memorial Building. During the conference, he emphasized the need to encourage Buddhist practitioners to lead their ways, from birth to growth to enlightenment, always in the presence of sentient beings. Only then can the Korean Buddhism get back to the harmonized life as it should be and thereby can obtain the momentum of growth.
He further explained, “As recently as in the 1970s the Korean Buddhism maintained time-honored tradition, such as harmonized life and fortnightly confession ceremony, under the consensus with the public. Now that the entire nation is under the sway of western culture, however, the Korean Buddhism is wavering between social commitment and secularization.” He added, “I believe that should the central Buddhist authorities and volunteers be more committed to supporting the public, the Korean Buddhism will accelerate restoration of its good traditions.” In particular, he emphasized the importance of maintaining the religious principles in order to retain reputation and integrity of the Buddhist order.
Stressing the need to revive the Korean Buddhism, he proposed four big tasks to be achieved: encouraging studying mood among Buddhist practitioners; encouraging Buddhist practitioners to promote Buddhist order through the pursuit of consensus with the public; reinvigorating efforts to popularize Buddhism and promote welfare system; regaining credibility from the public; and asking Buddhist community more responsible role in society.
Meanwhile, the Jogye Order handed out press materials containing details of its business, which include diverse ways to disseminate Buddhism among children, make up for financial loss that would otherwise have come from National Park fees, decentralize its administrative task system, revolutionize task management system of central Buddhist authorities, build welfare building in Sri Lanka, reclaim Jogye Order’s property lost and popularize Hwadu Seon.
Among the strategic tasks he proposed to pursue next year are: completing this year’s projects successfully, popularizing Buddhism among children; promoting the Korean Buddhism internationally; preparing social welfare system to meet the growing needs of aging population; popularizing Hwadu Seon; establishing decentralized administrative task management system; providing welfare benefits to Buddhist practitioners; and restoring public credibility for Korean Buddhism as well as Korean Buddhist community.