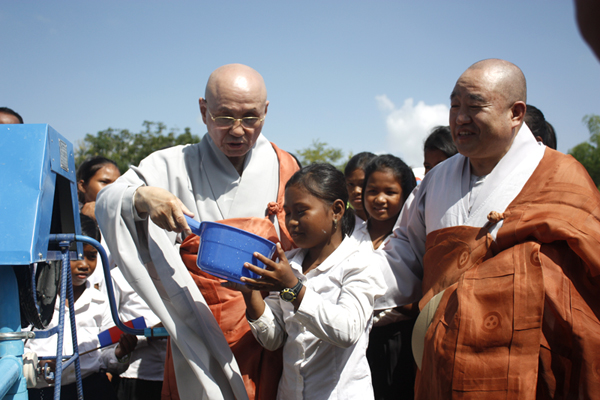 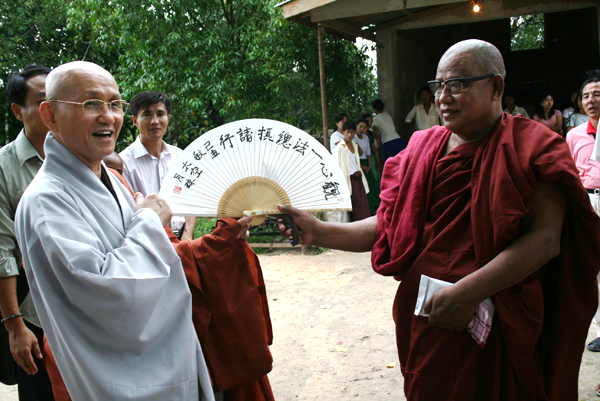 Master Wolju giving a fan as a gift to a local Buddhist monk in Manityama. Bago, Myanmar in 2009

Master Taegongdang Wolju’s life represents the whole of the modern history of Korea as well as that of Korean Buddhism itself. After his secular study, he renounced this world and chose a path of spiritual practice to enlightenment. He worked every moment of every day of his life not only to lay the foundation of modern Buddhism but to soothe the suffering of the nation and its people and usher in a world where humanity can live in a peaceful co-existence.

He was born in 1935 under Japanese colonial rule in Jeongeup, Jollabuk province. He graduated from Saneui Elementary School, Jungdong Middle School in Seoul, and Jeongeup Agricultural Highschool. Also grew deeper as he grew older was the desire to save all beings and realize peace on this earth through religious practice.

His life burns bright as a lamp in this era because he worked relentlessly to emulate the great compassion of Buddhas and Bodhisattvas, not bound by the limits of the mountain temple where he resided. Living his life by the vow of Samantabhadra, he has set a supreme example of how to balance Bodhisattva’s selfless generosity, alwaysrelieving people of the suffering and giving themjoy, with the tireless cultivation of meditation as an ordained monk.

After being elected as a member of the 2nd Central Council of the Jogye Order in 1966, hebuilt strong foundations for Korean Buddhism while serving in a variety of offices such as Director of Religious Affairs Office, Director of General Affairs Office, and Chair of the Central Council.In his infinite wisdom, he presented to the four-fold assembly the realistic alternatives for the reform of the Jogye Order, which at that time was still reeling from the repercussions of the Buddhist Purification Movement. He was a master architect who provided a superb blueprint upon which he started building the future of Korean Buddhism.His sincere and selfless devotion earned the recognition of monastics and the laity alike, winning him the office of the 17th President of the Jogye Order of Korean Buddhism in April 1980.

Still in his mid-40s, Master Wolju as the president of the Jogye Order made a clean break from the undue Japanese cultural influences and reinforced the compliance with the “Pure Rules” (monastic precepts)while promoting the spirit of reconciliation by ending internal conflicts within the Order. Also a firm believer in the separation of state and religion, he stood up against unjust interferences and abuse of power by the state.

He flatly refused General Jeon’s demand to issue an official statement endorsing his military regime, which seized power through the December 12 Military Insurrection and the Coup d'état of May 17. Furthermore, Master Wolju visited Gwangju to show his support for the citizens who got injured while fighting for democracy and hosted ceremonies in honor of the victims of the May 18 Gwangju Uprising.

Master Wolju was following in the footsteps of Huineng, the Sixth Patriarch of the Chinese Chan Buddhism, who taught that there is no difference between the secular world and the spiritual realm.

Buddha-Dharma is only found

In the middle of the secular world.

If youseek the Truth anywhere else,

It is like trying to find a horned rabbit.

However, Korean Buddhism has suffered the painful ordeal of having its sacred places trampled. It was the incident that occurred on October 27, 1980, when the military raided Buddhist temples around the country and rounded up innocent monks and nuns. After the persecution, Master Wolju found refuge in the USA. While ardently practicing Seon meditation in Prajna Gate Buddhist Temple in LA, California, he gained insight into the future.

To him, being an ideal Buddhist practitioner is not just about removing oneself to a remote mountain and doing nothing but religious practice; it is also about being with the vicissitudes in the lives of fellow human beings and giving them help when they are in need of it. He did his best to remedy social ills that plagued Korean society by serving as the co-president of the Council for the National Campaign to Defuse the Regional Prejudice(1988), the co-president of Citizens’ Coalition for Economic Justice (1989), the co-president of Citizen’s Coalition for Fair Election (1990), and the chair of the Buddhist Association for Peaceful Reunification of Korea (1992). 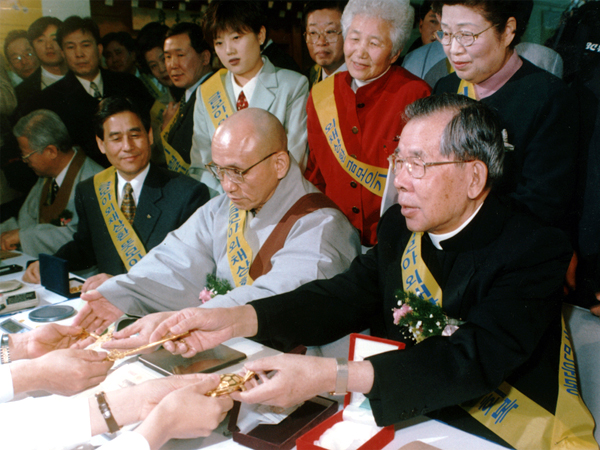 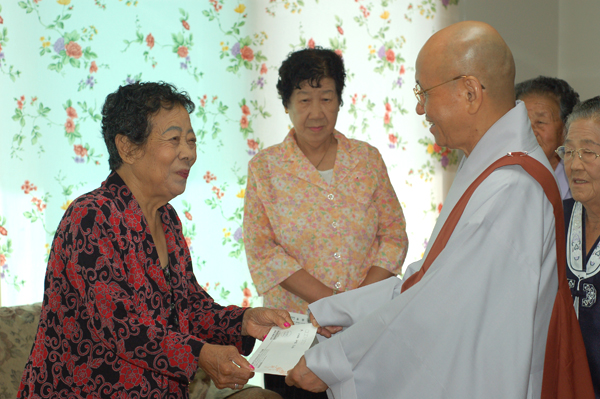 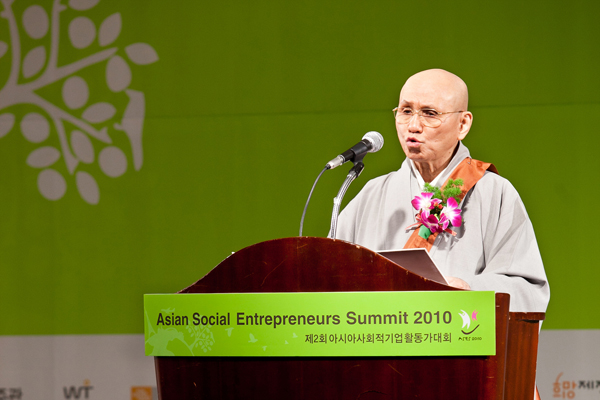 The year 1994 was the year of hope for the Jogye Order’s future. As the leader of the Jogye Order, Master Wolju implemented several crucial reform measures, such as establishing the Monastic Education Bureau and the DharmaPropagation Bureau. He also taught us that spiritual practice is not different from propagation by launching the Enlightenment Socialization Movement.

After stepping down from the leadership of the Jogye Order in 1998, he actively involved himself in civil society movement and NGOs for international humanitarian relief, to make the lotus flowers of compassion bloom in the mud of the secular world. He opened the House of Sharing for the women forced into sexual slavery by the Imperial Japanese Army at a time when no one was interested in the issue and helped them recover from the past trauma and restore their honor. He also created the Good Hands Foundation to provide humanitarian aid to poverty-stricken areas of the world.

In his memoir Horned Rabbit, Hairy Turtle, Master Wolju wrote, “It is time for Koreans to turn their eyes outward to the rest of the world. It was as if I was ordained a second time. We must dig deep to create a vast well, big enough to share with the whole of humanity.” He was a warm-hearted guardian of the dignity and honor of the ex-comfort women for 29 years without receiving any kind of remunerationwhatsoever, and he flew to far-flung corners of Southeast Asia and Africa to give the local citizens whatever they need to make their lives better well into his 80s.

In later life, people pleaded with him to “slow down and live out the remaining days in peaceful retirement” but he could be always found where there was suffering. It did not matter how far away they were. Whenever he saw someone in pain, whether it is of mental, physical, or financial nature, he was there to help. He claimed as his own any place there are the disenfranchised and made it his temple.

Heaven and earth share a single root with me.

All things in this universe, including myself, form a single body.

Master Wolju’s life of altruism moved many people outside the Buddhist community including the governments around the world. In recognition of his compassionate contributions, he was awarded the Moran Medal of the Order of Civil Merit (2000), andthe Mugunghwa Medal of the Order of Civil Merit (2011) by the government of Korea, and conferred the Cambodian Royal Medal (2010), and the Satama Zodikadaza (2013), the Title of the First Class in Myanmar. He was also the recipient of the Jogye Order Propagation Grand Award (2005), the Manhae Grand Prize (2012), the 1stMinsesang Award (2010), and the Daewon Prize (2013).

In his memoir, Master Wolju said his last and only wish for his final years was to better serve “the Jogye Order I belong to, my people and my country, and the whole of humanity in this global village.” He also emphasized that “what better wish an ordained monk could aspire to other than doing his best at any given moment to be a better servant for the community, whether one is given a specific task or not.” 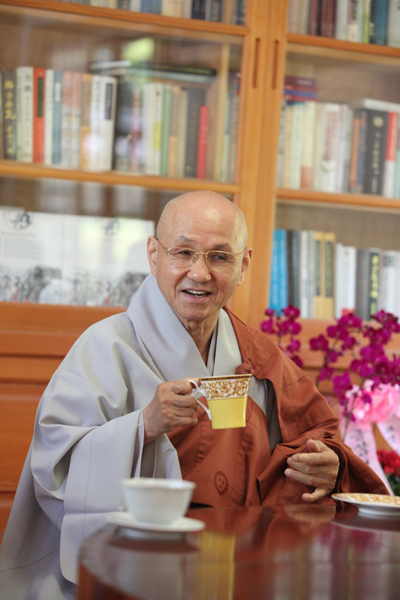 Sharing tea at Manwol pavilion, Geunsa-sa Temple on the Buddha’s Birthday in 2013

After devoting his whole life to Buddhist practice as well as saving all beings from suffering and securing lasting happiness for all, Master Taegongdang Woljuentered parinirvana on July 22, 2021 (B.E. 2565) at the age of 87 after spending 68 years as an ordained monk. His time on this earth came to an end, but his life will forever remain in our hearts as a guiding light that illuminates the darkness of ignorance.

His teachings and life of compassionate acts can be summed upin the famous poem by Master Wonhyo.

Return to the source of the One Mind, and

Gatha (Song of enlightenment) at the final moment

Heaven and earth has always been nothing but vast emptiness,

All things in it are already buddhas to come.

The entirety of my life itself

Is already the song of enlightenment at the time of death.