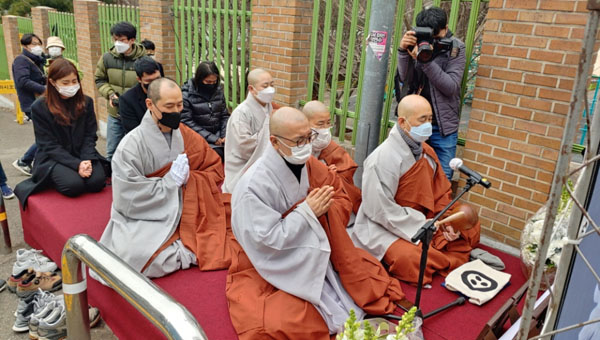 ▲The Social and Labor Affairs Committee of the Jogye Order of Korean Buddhism dedicated a ceremony in front of the Myanmar Embassy in Seoul, praying for the end of Myanmar’s military junta’s violent suppression of the civil disobedience movement.

Myanmar, the land of stupas is in grave distress. The protests against the coup d\'état by the Myanmar military are spreading across the nation, calling for the reinstatement of democracy. In a violent crackdown, Myanmar’s military and police deployed the use of brutal force, opening fire on the protesters with reports of at least a dozen fatalities so far. It is unclear how many people will lose their lives in their struggle against the military, or they will win their country back from the dictatorship.

Amid the uncertainties surrounding the political situations of the country, the Korean Buddhist community led by its monastics got together in its aspiration for ‘the Yangon Spring,’ the return of democratic rule in Myanmar. The Social and Labor Affairs Committee of the Jogye Order of Korean Buddhism dedicated a ceremony in front of the Myanmar Embassy in Seoul, praying for the end of Myanmar’s military junta’s violent oppression and the world peace.

The venerables belonging to the Committee, including the chairperson Ven. Jimong, and the members of the Myanmar Youth Association in Korea joined the ceremony calling for Myanmar’s armed forces to stop the use of excessive force and reinstate the lawfully elected government.

Ven. Jimong, the chairperson of the Social and Labor Affairs Committee of the Jogye Order strongly condemned the coup, urging the military tocease the assaults on unarmed civilians immediately, reminding them to be good Buddhists saying, “The very first of the five Buddhist precepts is do not kill, so the violation of this sacred decree should be allowed under no circumstances.” 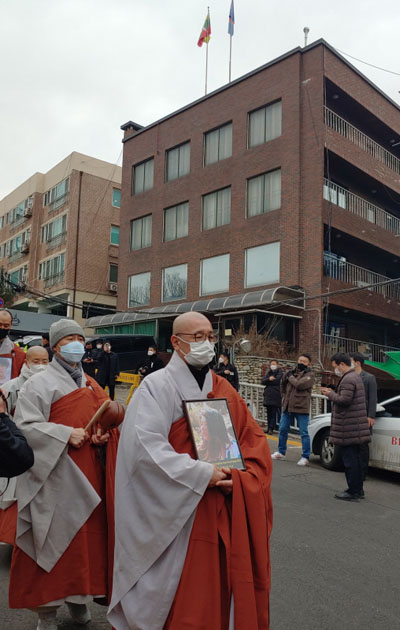 ▲The venerables officiated a ritual dedicated to those who lost their lives for the cause of Myanmar’s democratization.

He said, “We pray that the souls of the innocent victims be reborn in the Western Paradise. Koreans are united in their support of the people of Myanmar fighting for democracy and their civil disobedience movement.”

The participants joined the venerables in the ardent chanting for the six Myanmar citizens who sacrificed their lives for their country, praying for their souls to be reborn in the Western Paradise.

Ven. Goguem, the member of the Social and Labor Affairs Committee played Dharm drums, and his performance was followed by the speeches from the members of the Korean Catholic Witness to Urban Poor and the Myanmar Youth Association in Korea. They concluded the day’s ceremony by dedicating a ritual to the victims.

Han-Eung Yang, the commissioner of the Social and Labor Affairs Committee said, “The people of Myanmar is desperate for the support of the international community, especially that of Korea, a sister country that has achieved democratization by overthrowing the oppressive rule of the military dictatorship. I will do my best to help Myanmar to stop the violent oppression of its people by the junta and bring ‘the Yangon Spring’ to the country.” 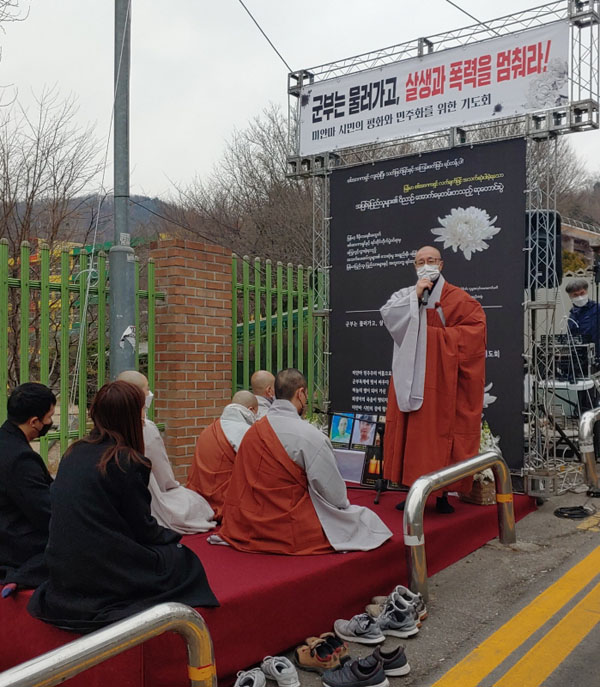 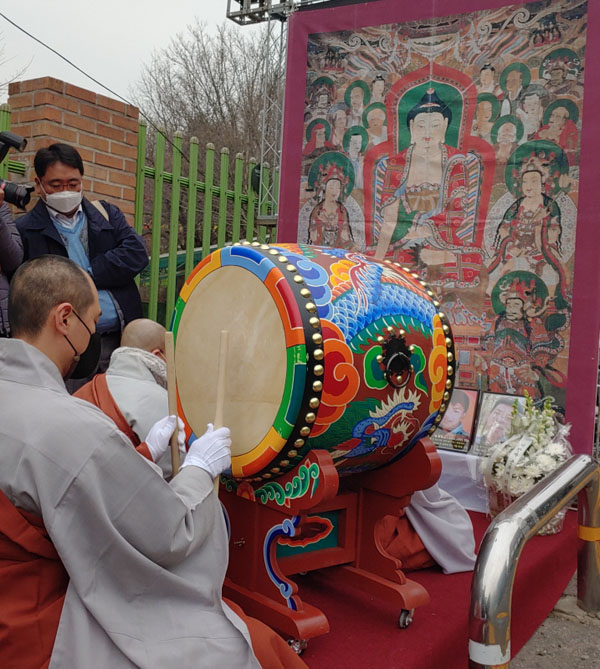