Five skandhas or aggregates are empty, but doesn’t the white color signify purity and emptiness as well? November 22 was "the minor snow," one of the 24 cosmic terms of the year in the lunar calendar in Korea, and, as the term implies, it is the harbinger of the snowy season. When we look at the mountains covered with beautiful white snow, it seems that all the dust accumulated in our mind are melting away.

There are 10 noted mountains in Korea. They are Baekdu (white head), Geumgang (diamond), Halla, Seorak (snow mountain), Jiri (extraordinary wisdom), Songri (cessation of the mundane world), Odae (five foundations), Taebaek (great white), Geryong (cock and dragon), and Bukhan (the north of the capital). Except Baekdu and Geumgang, they are all located in the southern part of the Korean peninsula. 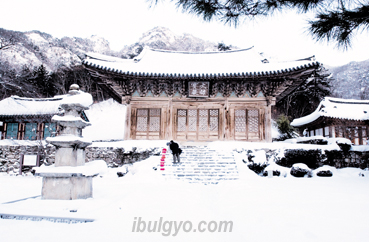 Baekdam (hundred ponds) Temple is the most well known temple in the interior region of the Mt. Seorak. This temple is located by the up stream of the Baekdam creak where the two streams flowing down from Gaya and Gugok creeks meet. This temple is also the gateway to the mountain climbing of the interior region of Mt. Seorak. There are eight mountain trails around the temple.

This thousand years old temple was first built by Preceptor Jajang during the Silla Dynasty, and it is also well known temple where the patriot-priest Manhae Han Yong-un wrote his famous poem "The Silence of Love."

Mt. Halla is the highest mountain (1950m above the sea level) in South Korea, which is also the trademark of Jeju Island. It was sometimes called the mountain of Buddhas because there once were 500 temples and Buddha statues in this mountain. This temple, one of the 23 District Head Temples of the Jogye Order of Korean Buddhism, is also, as it is with Baekdam Temple in Mt. Seorak, one of the gateways of the five hiking trails to the peak of the mountain.

Hwaeom Temple, one of the 23 District Head Temples of the Jogye Order of Korean Buddhism, is the largest of the many temples in Mt. Jiri with many cultural assets. You can smell the fragrance of the thousand years old temple when you pass the One Pillar Gate, the Diamond Deva Gate, the Gate of Four Heavenly Guardians until you finally arrive at the Boje Pavilion.

This temple was well known for the departing point for the mountain hiking in the Jiri mountain until the completion of the Sung Sang Pass road. The Nogo peak of Mt. Jiri is about 1,200m above the sea level from the temple, and the mountain trail from the temple to is noted for its steep climb straight to the mountain peak, so steep that it is called "the nose pass."

Mt. Odae is noted for its beautiful scenery with the excellent natural surroundings of holy land where fifty-thousands Bodhisattvas are residing, according to the legend. The best winter snow-scenery of Mt. Odae is the view along the ridge from the main peak of Vairocana to the thick bush of japonica and the giant dead trees.

It is highly recommendable to visit the snow-capped bush of fir trees that form the snow-flower tunnel of Woljeong Temple, Sangwon Monastery, the Hall of Sublime Equanimity where the genuine sarira of Shakyamuni Buddha is enshrined, and then the Vairocana peak, the highest point of the mountain. 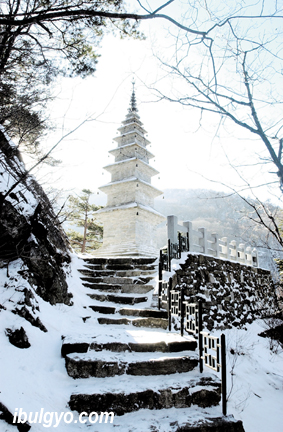 You can see not only the fine prospect of the temple but also the whole vista of the Taebaek mountain from the Sumano stupa (treasure #40) on the hill behind the Hall of Sublime Equanimity. The Sumano stupa is believed to have built with the agate obtained from the King of Dragon under the Yellow Sea by Preceptor Jajang when he was sailing back home from China where he studied at Mt. Odae.

The Sumano stupa is more celebrated because of the genuine sarara of Shakyamuni Buddha which is enshrined in the stupa, whereas the temple is designated as one of the five Halls of Sublime Equanimity in our country.

Donghak Temple is famous for its long tradition of Bhikkuni Buddhist Academy. The hiking trail starting from the temple to Eunseon fall → Gwaneum peak → the long ridge of the mountain → Sambul-bong pass → Sinheung Monastery → Yongmun fall → then finally to Gap Temple, which extends to 7.lkm, is well-known. But in the snowy winter, the mountain climbers prefer the course that connects the valleys of Danghak and Gap Temples instead of taking the course along the steep ridge of the peaks.

Jin-gwan Temple is beloved temple of Seoul citizens with three other temples around the capital. They are Buram Temple to the east, Sammak Temple to the south, Seungga Temple to the north. The beautiful Bukhan mountain is designated as the national park with many cultural assets and historical sites. Besides Jin-gwan and Seungga Templs, there are many other famous old temples in Mt. Bukhan including Doseon and Hwage Temples, all beloved by Seoul citizens.