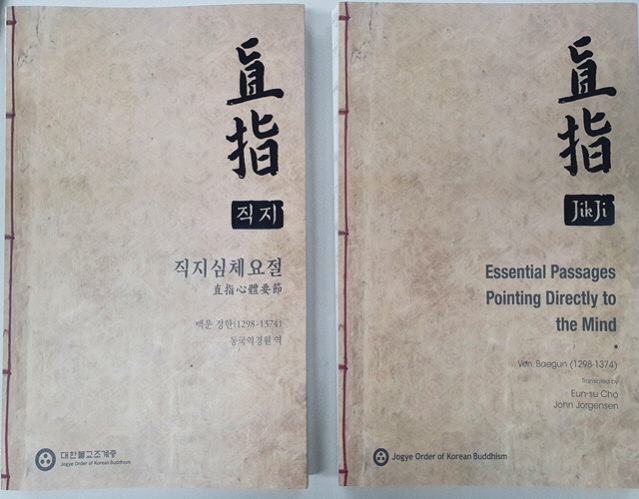 - Jikji, the World’s Oldest Text Printed from Metal Cast Types, informing the world of the excellence of Korean culture.

2. The year 2027 marks the 650th anniversary of the publication of Jikji. In addition to new Korean and English editions, the Jogye Order will be publishing the French translation of Jikji in 2021 to let the world know of the essence of Seon Buddhism and the excellence of Korean culture which invented the world’s oldest metal type printing technology.

3. Jikji simche yojeol, or Jikji, Essential Passages Directly Pointing to the Mind, is a collection of excerpts from the analects of the most revered Seon masters including 28 Indian and 110 Chan patriarchs over successive generations as well as the seven Buddhas of the past, compiled by Master Baekun Gyeonhan (1298~1374). Having studied under the tutelage of Chinese Chan Master Shiwu Qinggong, Master Baekun conveys the most fundamental truth of Seon, i.e., “To point directly at the minds of men is to see one’s true nature and achieve Buddhahood” through various gathas, pith instructions, Seon exchanges, quotes, Dharma talks, etc. included in Jikji, which is still considered the quintessential textbook for Seon practitioners.

4. Jikji was published in Heungdeok Temple, Cheongju, Chungcheong province in 1377, 78 years before Johannes Gutenberg's acclaimed "42-Line Bible," printed with metal moveable type by the disciples of Master Baekun after his death to facilitate wider circulation. Originally published in two volumes, only the last volume of Jikji survives and is kept at the National Library of France, or Bibliothèque nationale de France (BnF). UNESCO confirmed Jikji as the world's oldest metalloid type in September 2001 and included it in the Memory of the World Programme, and ever since, it has become a symbol of Korean people’s technological and cultural heritage.

5. Jikji was rediscovered in 1967 by Dr. Park Byeongseon who worked as a librarian for the BnF and was shown to the public for the first time in 1972 when it was displayed in Paris during the International Book Year hosted by BnF. The Jikji had been in the collection of Collin de Plancy, a chargé d'affaires with the French Embassy in Seoul, and then passed into the hands of Henri Véver. It was donated to the Bibliothèque Nationale de France in the 1950s, where it has been ever since.

Master Baekun Gyeonghan (1298 ~ 1374) was born in Gobu, Jeonlla province. He was ordained at a young age and wandered from one big temple to another located in famous mountains until he went to China, where he stayed for 10 years. Master Baekun traveled in 1351 (the third year in King Chujeong’s reign) to Tianhu Hermitage in Xiamu Mountain to meet Master Shiwu Qinggong, the transmission holder of the Linji School of chan Buddhism. In the same year, he also visited the renowned Indian meditation master Jigong at Yanjing and dedicated a gatha to him. Master Baekun came back to Master Shiwu Qinggong in 1352 and practiced day and night until he received transmission. After parting ways with Master Shiwu Qinggong, he went to Xiuxiu Hermitage and stayed there until March 1352, when he came back to Korea.

In January 1353, Master Baekun was reading the popular Seon text Zhengdao ge (The Song of Actualizing the Way) penned by Yongjia Xuanjue and came upon a passage saying, “Do not try to get rid of delusions or seek the Truth. The nature of ignorance is none other than the Buddha Nature, and the empty body of all manifestations is nothing but Dharmakaya itself.” While deeply contemplating upon it, he entered the state of no-thought and realized enlightenment, the state where not a single thought arises and there is no beginning or end, past or future, and absolutely nothing to depend upon except for the mind itself.

His contemporary Master Taego Bou recommended Master Baekun to the king in 1357 but he declined the king’s summon, citing physical illness. He was summoned again by the king in 1365 upon the recommendation of Master Hyegeun, and subsequently appointed as the abbot of Singwang-sa Temple, and in 1368 that of Hongseong-sa Temple in Gaepung, where the late Princess Noguk was enshrined. He went to Gosan-am Hermitage at Gimpo in 1369 and lived as a hermit until he took the government position of Examiner upon the recommendation of Master Naong in September 1370. He entered parinirvana in 1374 at Chwiam-sa Temple in Yoju where he was teaching young monks.

Except for a few years in later life, Master Baekun hardly associated with Goryo’s royal court, unlike his famous contemporaries such as Masters Bou or Hyegeun. Master Baekun was considered to be “a person of child-like innocence and sincerity who refused to align his name with falsehood and attained a true and pure perception (viṣaya).” His teachings are preserved in Recorded Sayings of Baekun, as well as Jikji, Essential Passages Pointing Directly to the Mind, the 2nd volume of which was found in Paris and confirmed as the world's oldest metalloid type text.

<Source: Masters of Ancient times and Middle Ages by the Education Bureau, the Jogye Order of Korean Buddhism>