- The 15th session of the Intergovernmental Committee describes Yeondeunghoe as exemplary 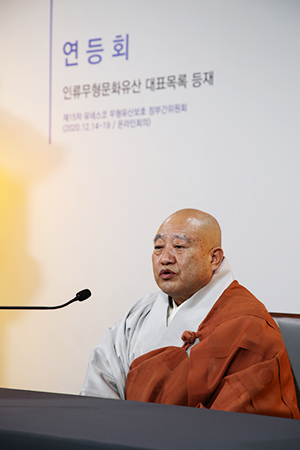 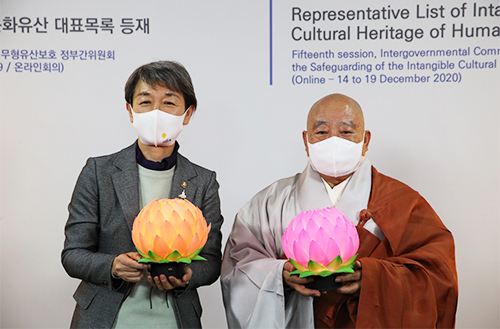 1. The Yeondeunghoe Safeguarding Committee (chairman: Most Ven. Wonhaeng, the president of the Jogye Order of Korean Buddhism) announced that the Intergovernmental Committee for the Safeguarding of the Intangible Cultural Heritage has decided on December 16 to inscribe Yeondeunghoe (lantern lighting festival) on the Representative List of the Intangible Cultural Heritage of Humanity at its fifteenth session. The fifteenth session of the Committee is being held online from December 14 to 19.

2. Most Ven. Wonhaeng, the chairperson of the Yeondeunghoe Safeguarding Committee said, “Yeondeunghoe is a living, breathing heritage that is one of the finest examples of Korea’s traditional culture. As the international community has recognized the importance and contribution of Yeondeunghoe as humanity’s common cultural treasure, I celebrate the Committee’s decision with the people of Korea as well as all Korean Buddhists and will continue my long-standing endeavor to preserve and develop this precious inheritance and pass it onto the future generation.”

3. The Committee took note of△the inclusiveness of Yeondeunghoe, which contributes to overcoming all social boundaries and to ultimately expressing cultural diversity, and also noted that△the lantern lighting festival plays the role of sharing pleasure and, in times of difficulties, of enhancing social cohesion.Most importantly, the Committee celebratedYeondeunghoe as a good example of how a single inscription can contribute to enhancing the public awareness of the significance of intangible cultural heritage in general.

4. The successful entry of Yeondeunghoe into the Representative List is an achievement accomplished through close collaboration throughout the entire process among the Cultural Heritage Administration (CHA), the Ministry of Foreign Affairs, and the Yeondeunghoe Safeguarding Committee. The new inscription has greatly enhanced Korea’s influence and status on the global scene in the area of intangible cultural heritage.

2. Photos and videos(provided by the Jogye Order). See the storage cloud.