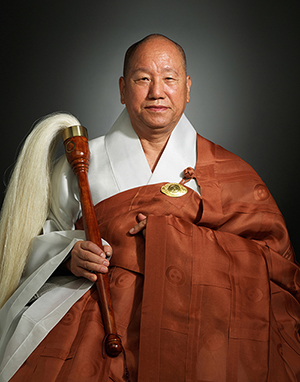 [Ascending the Dharma seat and holding up his Dharma staff to the assembly:]

Seated valiantly, one severs a thousand paths, and

Lotus flowers bloom in clusters amid flames of fire,

Blue mountains walk over the water step by step.

Today we enter the winter meditation retreat for the 2564 Buddhist Era.

We have renounced all affluence and conveniences of the secular world, and closed the mountain gate voluntarily. Having severed all ties with the world, we will put in joyous effort only to attain eternal freedom from the suffering of cyclic existence (saṃsāra).

This work cannot be entrusted to others; only you can cultivate this path, and you must attain ultimate freedom for yourself.

All monastics who have entered the retreat must sever all associations with the external world for the coming three months. You should take meals with a detached mindset, and not pay attention even to the person sitting next to you. You must only investigate your hwadu with calm alertness, and make the doubt on your hwadu penetrate your 84,000 pores.

In this way you strive with all your heart, and suddenly greet the moment when genuine doubt arises from within. From then on, only the doubt on your hwadu is seen clearly, and the doubt keeps flowing ceaselessly like a running stream.

At this time you are aware neither of things in front of your eyes nor of sounds coming to your ears. Then the habitual energy and karmic tendencies you have cultivated for countless lifetimes melt away without a trace.

In this state of consciousness months or years may flow by, and suddenly the moment you see an object or hear a sound, your hwadu is shattered into pieces, and your true nature is clearly revealed at the same time.

Then you reach the realm of the Buddha without even having moved one step, and you gain a penetrating understanding of all 1,700 gongans (koans) our ancestors have established.

Unless you attain this single-minded concentration on your hwadu, you cannot see your true nature. You must bear this in mind again and again.

If you have already received a hwadu from your teacher, investigate it.

If not, take the hwadu, “What was my true self before my parents gave birth to me?”

Take this hwadu and raise a doubt about it a thousand or even ten thousand times a day.

You must keep investigating your hwadu while maintaining single-minded doubt on it.

In Tang China many practitioners practiced valiantly day and night with fierce aspiration under the guidance of renowned Master Mazu, and 84 great disciples were ultimately produced.

Of these great disciples, the practitioners who received the transmission of Dharma, after having attained complete and thorough enlightenment by passing through the gate that leads upward, numbered only 5 or 6, including Masters Baizhang, Nanquan, and Xitang.

One day Master Mazu was sitting on the Dharma seat, and Baizhang entered. Mazu held up the fly whisk which had been hung at the corner of the Dharma seat.

Mazu hung the whisk back in its place.

Baizhang stood quietly for a while, and Mazu asked again.

“Later, when you are flapping your lips, how will you be of help to people?”

Then, Baizhang took the whisk and held it up.

Baizhang quietly hung the whisk in its place.

This shout frightened Baizhang out of his senses. He was deaf for three days, and then realized what Mazu had meant by shouting.

From this incident Baizhang received the Dharma of Mazu, and set up his own Dharma family. He moved to another area and taught Dharma there.

A few years after this incident, Huangbo visited Baizhang and stayed with him a few days. When Huangbo bid farewell, Baizhang asked:

“Where are you headed?

“Master Mazu has already passed away.”

“It’s too bad that I didn’t have enough merits to see the renowned master in person. You served him for a long time and received guidance. Would you please expound on one of his lofty talks for me?

Then Baizhang relayed the story of the fly whisk and added these words:

“At the time I was deaf for three days from Master Mazu’s shout.”

Hearing this, Huangbo unknowingly stuck out his tongue and looked at the sky.

In this way Huangbo became the foremost disciple of Baizhang and passed on his Dharma.

If so, how great was this single shout from Mazu that two masters attained sudden enlightenment from it?

This single shout from Mazu was passed on to Baizhang, Huangbo, and Linji, ultimately leading to the establishment of the Linji House, one of the Five Houses of Chinese Chan Buddhism.

Tell me, monks of the assembly!

Do you understand what the single shout of Mazu comes down to?

It’s like one wails, and then adds the suffering of grudges.

In addition, Master Yunmen, the founder of the Yunmen House, one of the Five Houses of Chinese Chan Buddhism, gave three teachings as follows to his students when he had almost exhausted his worldly ties.

First, what is the Way?

Second, what is the School of Aryadeva?

Aryadeva was a disciple of Nagarjuna, the 14th Dharma-descendant of the Buddha. Aryadeva subdued 96 non-Buddhist lineages during his time in India and propagated the tenets of the School of Aryadeva far and wide.

Third, what is the jeweled sword of truth?

To these three questions thrown to the assembly, Master Baling gave excellent answers.

First, what is the Way?

“The keen-eyed fall into wells.”

Second, what is the School of Aryadeva?

“A silver bowl full of snow”

Third, what is the jeweled sword of truth?

“Coral branches prop up the moon”

“When I enter nirvana, you don’t have to prepare proper food on my memorial day. Just give me these three teachings.”

These three teachings surpass the 84,000 Dharma gates that were expounded by Sakyamuni Buddha in his 49 years of teaching.

Only when you understand Mazu’s single shout and the three teachings of Yunmen can you say you understand the household affairs of the Buddha. Then you will have enough strength reserved to transmit the truth to ten thousand generations for a thousand years. You will be of the same rank as all Buddhas and generations of Patriarchs and become a guiding teacher for the human and heavenly realms.

If any one of you fully understands this Dharma talk, I will transmit this Dharma staff to him by holding it up with my two hands.

I admonish you: make joyous effort again and again.

Monks of the assembly!

Do you understand the Yunmen family?

[When the assembly remains in silence, he says:]

The blind get together and smile at each other.

Clinging onto a fence, they say it’s a wall. How lamentable!

[Hitting the Dharma seat once with his Dharma staff, he descends.〕