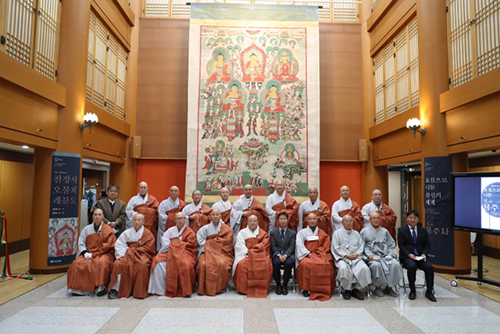 The Central Buddhist Museum of the Jogye Order held an opening ceremony for a special exhibition featuring, “The Manifestation of Filial Piety in the World of Buddhism, Yongjoosa of Flower Mountains.” For the first time, National Treasure No. 296, the Hanging Painting of Five Buddhas at Chiljangsa Temple was made public for viewing.

This special exhibition will be held highlighting several Buddhist cultural heritage of Yongjoosa, the second district head temple, until February 28, 2021. Exclusively, the highlight of the special exhibition, the Hanging Painting of Five Buddhas at Chiljangsa Temple, was shown at the opening ceremony at the lobby of the Memorial Hall of Korean Buddhist History and Culture. The Five-Buddha Hanging Painting of Chiljangsa in Anseong City, a subsidiary of Yongjoosa Temple, is a colossal Buddhist hanging scroll about 6.56 meters in length and 4.04 meters in width. This long, hanging scroll is displayed at the front yard of the dharma hall during a dharma talk or a ceremony in the temple.

In addition to the Hanging Painting of Five Buddhas of Chiljangsa Temple, Buddhist holy relics related to Yongjoosa arefeatured in theunique presentation. Ten articles of Treasure, fifteen articles of National Intangible Cultural Heritage, and one article registered with the UNESCO Memory of the World Program are made public. It is an opportunity to encounter rare treasures or relics. There are Stone Seated Vairocana Buddha from Unsuam Hermitage, Dharma Nectar Painting from Yongjoosa Temple, the Seven-Letter poem handwritten by Queen Inmok (the wife of the 14th monarch, King Seonjo, of Joseon) from Chiljangsa Temple, the treasures and scriptures from the belly of Wooden Seated Amitabha Buddha from Bongnimsa Temple, the treasures and scriptures from the belly of Geonchil (hemp clothing covering coated with lacquer and liquid gold) Seated Amitabha Buddha from Cheongwonsa Temple, and the printing woodblocks of Bumoeunjunggyeong(Parental love Sutra) sponsored by the royal family of Joseon. Yongjoosa was the royal temple founded by King Jeongjo, the 22nd ruler of the Joseon Dynasty (1392-1910), to pray for the repose of his deceased father, Crown Prince Sado.

President Venerable Wonhaeng emphasized at the congratulatory speech, “As Yongjoosa Temple was personally founded by the king himself, its prominence should be highly regarded so its cultural heritage will be able to send a resonating message to the people of Korea in the increasinglyhostile world.”