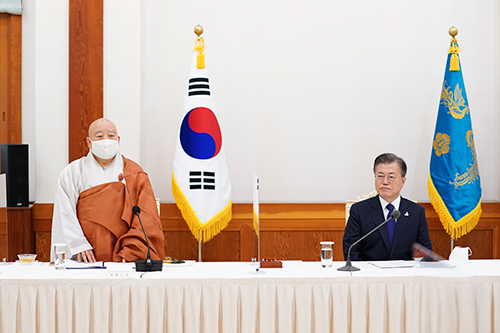 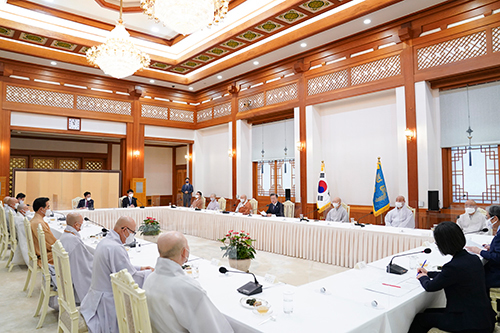 President Moon invited the Buddhist leaders of the sects that belong to the Association of Korean Buddhist Orders to the Blue House on September 18. At the meeting held in Chungmu Room, President Moon thanked the Buddhist monastics and laity for “providing comfort and encouragement for the people of Korea who are having a hard time because of the COVID-19 pandemic.” President Moon praised the Buddhist community for “being proactively cooperativewith the government in controlling the epidemic from the very beginning, canceling virtually all face-to-face religious events and gatherings to the point of barring temple doors. Even the Lotus Lantern Festival in May, which has continued for over a thousand years, was no exception. It was sad in that we could not see the lantern parade this year, which burned bright in celebration of peace and harmony, but the sacrifice of the Korean Buddhists kindled an even brighter flame in the hearts of Korean people, giving them hope that the COVID-19 crisis could be overcome if we stand together in sharing the burden and hardship. The Korean government understands what a difficult decision it was for the Buddhist community to cancel the Lotus Lantern Festival this year, especially because the UNESCO is about to make its decision on the designation of the Lotus Lantern Festival as World Heritage in December. The government promises that it will work even harder to support the move to have it listed as World Heritage so that the rest of the world can share and benefit from the cultural and spiritual gift that is Korean Buddhism.”

In response to President Moon’s remark, Most Ven. Wonhaeng, President of the Jogye Order of Korean Buddhism delivered a reply representing the Buddhist leaders participating in the meeting saying, “We are honored by the invitation despite what must be the extremely busy schedule of President Moon. The whole country is suffering. The small business owners are suffering from the recession, and the farmers are also suffering, hit hard by the typhoons. We Buddhist leaders must pray harder to help ease and share the nation’s pain.” He continued by saying,“The Buddhist community immediately understood that the guidelines from the health authorities must be followed because we knew nothing can be more important than ensuring the health and protecting the lives of the citizens. This resulted in significant economic difficulties, but so far there has not been a single confirmed case among the Buddhist orders represented here today. We will not stop our ardent prayer to Buddhas and Bodhisattvas until the threat posed by the COVID-19 pandemic on the people’s life finally ends.”

Most Ven. Wonhaeng also led the gathering in prayer, in which he stated, “All beings are living on the interconnected web of theIndra’s Net, in which we utterly depend on others for survival at all levels. We pray that given this reality, all beings realize that the best way to overcome difficulties is to have the courage to respect and help each other and promote the peaceful and harmonious co-existence instead of relying on hostilities and rushing to conflicts. We fervently pray that all beings join hands to work together to go beyond this hardship and move forward on the path of compassion and wisdom to achieve a true and lasting happiness.”

After the meeting was concluded, Most Ven. Wonhaeng presented to President Moon thecalligraphy hand created by His Excellency Master Jinje, Supreme Patriarch of the Jogye Order. The calligraphy reads ‘萬古徽然(mango hweiyeon),’ which means ‘eternally radiant in countless years.’ The phrase was chosen by Master Jinje in an earnest aspiration that President Moon will overcome this unprecedented national crisis with wisdom and build a country that will shine eternally.