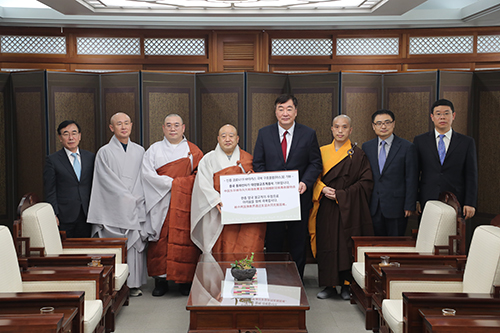 On April 9, 100,000 face masks arrived at the Korean Buddhist History and Culture Memorial Hall, where the Administrative Headquarters of the Jogye Order of Korean Buddhism is located. The masks were packed in 50 boxes, each of which bore the message of “Let’s overcome this crisis through the friendship between the two countries.” They were sent by Donghua Zen Temple in China in response to the earlier humanitarian aid rendered by the Jogye Order to China.

In last February, the Jogye Order of Korean Buddhism provided 100million won as an emergency relief to China, as well as the face masks donated byCheonggye-sa Temple, when the country was threatened by the novel coronavirus scare.

The Most Venerable Wonhaeng, the president of the Jogye Order was visited by Ambassador Xing Haiming, Chinese Ambassador to Seoul and thanked him by saying, ”We only did what we ought to do to another fellow Buddhist country. We never expected what we did would be returned so graciously.” He continued by saying, “The coronavirus epidemic is still rampant throughout the world, so we are doubly grateful that Donghua Zen Temple still cared enough about us and took the trouble of sending us aid.”

Ambassador Xing Haimingreplied in fluent Korean, “When a crisis hits, the most important thing is for everyone to be united in harmony and work together to focus on solving the problem.” And he wished that the coronavirus pandemic would end soon and the lives of the people could return to normal in no time, and only auspicious tidings would await the two countries in the future.

Most Venerable Wonhaengalso wished that the coronavirus pandemic would soon die down so that the Korea, China and Japan Buddhist Goodwill Conference scheduled to be held in October would be hosted by Korea as planned. He urged the ambassador to join him to make effort so that Korea and China would continue to further the cultural exchanges and foster closer economic, diplomatic and political relations.

The 100,000 face masks delivered byDonghua Zen Temple will be distributed to 24 District Headquarter temples and other temples who run templestay programs all over the country.

Earlier in April, the Jogye Order of Korean Buddhism also received an emergency relief fund from the Buddhist Funding Society of the Hunan Province, China in the amount of 43 million Korean won (250 grand yuan). The money will be contributed to the coronavirus prevention and containment fund managed by the Association of Korean Buddhist Orders. 8,000 face masks donated by Taiwan’s FoGuang Shan Monastery will be distributed to social welfare and immigrant labors’ organizations.