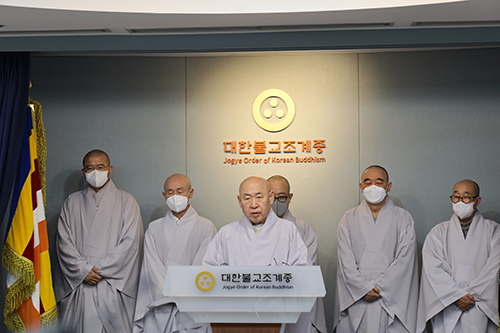 Statement on the COVID-19 Outbreak

By the Jogye Order of Korean Buddhism

- We will overcome this national crisis with our ardent aspiration.-

The whole country is shrouded in shock, terror and anxiety as the coronavirus outbreak is now rapidlyspreading nationwide. Fearing infection, people avoid each other, with the street nearly empty as people are driven indoors. The local economy has been hit hardest, with many small businesses on the brink of going under.

We hear stirring news of hundreds of medical personnel voluntarily flocking to Daegu in response to the local hospitals’ cry for help, and of Busan and Gwangju agreeing to accept patients overflows from Daegu. Donations and aid supplies are pouring into the badly afflicted areas, the whole country rooting for the people of North Gyeongsang Province and Daegu. I can only be so grateful. Such courageous spirit is simply previous.

In Buddhism, the world we live in is referred to as the Indra’s net. It expresses the interconnectedness of every being living in it, the net linking everything and spreading throughout the whole universe. No one exists beyond the connections to everyone else, each reflecting another. Sending support along these links, no matter how small it is, is a way of acknowledging the reality of the Indra’s net.

No country can exist without its people.

Now, many Korean people are concerned how the country is still divided and locked in conflict even amid the crisis of a staggering proportion. We must place the overcoming of this state of emergency as our top priority, putting a stop to the vicious cycle of in-fighting and factionalism. We all should realize that every moment is a must-not-be-missed golden time, a fleeting window of opportunity that is most crucial in saving lives and stand behind the campaign to pull through this calamity.

Korea has a long tradition of pooling the wisdom to get over the disasters that have threatened the nation, united in anunflinching sense of civic solidary. I am confident that Koreans will once more rally to stand above the knee jerk reactions of fear, anxiety and hatred and meet the challenge head on in harmony.

The Jogye Order of Korean Buddhism has been actively cooperating with the government’s all out efforts to slow the spread of COVID-19, issuing emergency guidelines on two occasions to all Jogye Order temples.

Currently, the Beautiful Friend Foundation is doing a fund-raising to support the people who are living in the most severely affected areas. We will continue to attend to recovery plans for the residents of Daegu and North Gyeonsang Province.

The Cultural Corps of Korean Buddhism and the temples operating templestay programs will invite medical professionals and government health workers who are willingly risking their lives on the front line to special templestay programs so that they can rest and heal their distressed mind and body.

We will urge 10 million Buddhists all over the country to join our on-going prayer in wishing for health and stability for all Koreans, and swift recovery of those who are infected and fighting this new disease.

It was a tough call to cancel all Dharma gatherings and events since a temple cannot survive without the spiritual and financial support of its congregation. However, we decided to take the plunge because we believe the virus, if left unchecked, will cause irreparable harm to the society, which trumps any economic consideration for the operation of temples. I would like to take this opportunity to thank the monastics and laity alike for faithfully following the Order’s emergency guidelines.

I would like to ask all Buddhists in the country to try to continue their spiritual practices at home every dayalthough the access to the larger community and its resources is temporarily made unavailable, and be aware that there are ways to support the Buddhist temples without visiting them, such as on-line donations for lanterns, so that the prayers and rituals in the temples can soldier on.

We will come through this ordeal with our ardent aspiration.

If all of us join forces and pray with one heart, there is no difficulty we cannot surmount. We will leave this pandemic behind before too long, if we place our faith in the leadership of the government’sCentral Disaster Relief Headquarters, trust Korea’s medical community who is engaged in a battle against time to save the lives of their patients, and individual citizens take responsibility for their personal hygiene by strictly following government guidelines.

The Jogye Order of Korean Buddhism will continue to devote itself to fervent prayers for the health and safety of all Koreans. Thank you.

Most Ven. Wonhaeng, The Jogye Order of Korean Buddhism