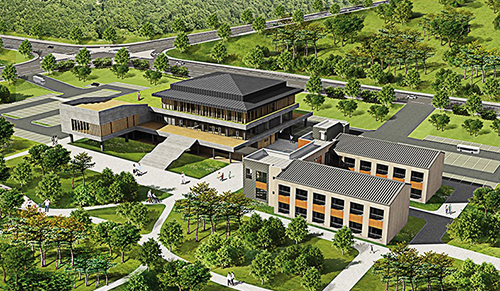 3. Establishing a Dharma Center in the Military, Gyeryongdae

One of the four long-cherished projects of the power of one million aspirations that is swiftly progressing is the construction of a temple outside of the military headquarters. Unlike the current dharma hall within the military compound, the temple will be located right outside so not just the families of military personnel but other people can use the facilities freely. The temple will have just a military affiliation and it won’t differ from other monasteries.

The reason that constructing a temple outside the military command in Gyeryongdae has been included in the part of the four long-cherished projects is that not only does the place holds its significance being in the military headquarters, but it can also act as a local center for spreading Buddhism.

The military headquarters of the Army, the Navy, and the Air Forces, and the entire military command of the Republicof Korea are located inGyeryongdae of Gyeryong City, Chungnam Province. Keeping the temple HoguksainGyeryongdae is symbolic as it will becomethe district head temple of Buddhism within the military forces. In Gyeryongdae, there is also a church and a cathedral affiliated with the military forces in addition to Hoguksa.

Originally, Gyeryong City used to be a small township of Gyeryong-myeon, Nonsan County. However, when the military command decided to relocate toGyeryongdae, a new city with 40,000 residents sprang up. When the new city was formed, a church and a cathedral moved in quickly and constructed their missionary centers in order to spread their religions to local communities in 1996. Protestants spent the sum of 100 billion won (about $82 million USD), bought about 16,000 pyeongs (approximately 53,000 m2) of the real estate, and constructed a church, a 4-story building including a basement with the floorspace of 3,400 pyeongs (12,240 m2). They have already renovated their facilities once and they can accommodate almost 3,000 people at once. The Catholic Church also spent 32 billion won (about $26.3 million USD), purchasing the real estate of 34,000 pyeongs (about 12,240 m2) and constructingthe main cathedral with a one-story building with the floorspace of 965 pyeongs (about 3,100 m2) along with a kindergarten and a separate parsonage for priests.

On the other hand, Buddhism only managed to get a dharma hall within the military headquarters and couldn’t come up with a temple outside. Buddhism is 24 years behind the Protestant and the Catholic churches. Unable to establish a respectable temple that can take the role of spreading Buddhism, we only have one dharma hall in the headquarters and small size dharma centers. Founding a temple outside of Gyeryongdae is considered one of the most important projects but it has been delayed for so long due to financial matters.

Though we are 24 years behind the others, establishing a temple outside Gyeryongdae is finally close came close to a realization. The Minister of National Defense included a plan to remove the deteriorating dharma facilities and its affiliated kindergarten,and build educational facilities for Buddhists outside for their 2019-2023 midterm projects so the timing is appropriate. Last March, President Venerable Wonhaeng visited the construction site and pushed forward with the establishment of the temple outside of the military headquarters as one of the four major overdue projects of the Buddha-work of assembling one million aspirations.

Since then, the projectof constructing the temple outside the military command is progressing just briskly. Among the entrances of Gyeryongdae, the second main gate was selected as it is frequently used by the people and the real estate of 7,700 pyeongs (about 25,450 m2) was purchased. With the budget of 60 billion won (about $49 million USD) in hand, the plan of constructing a 3-story building with the floorspace of 572 pyeongs (about 1,890 m2) for the temple has been confirmed and the detailed blueprint of its design went into drafting. Accordingly, the plan is being pressed to begin around July or August upon passing the design evaluation and acquiring the building permit as expected. The actual construction can begin then and will push forward for the completion by September of 2021. In addition to the already allocated budget for the construction of the temple outside the military headquarters, the Ministry of National Defense will inject 40 billion won (about $33 million USD) for constructing another building fora temple stay training center so the total 100 billion won (about $82 million in USD) will be available for the project.

This temple near the military command is significant as it can play a major role as a dharma center of disseminating Buddhism as the Jogye Order is also pushing ahead with the construction of two other temples in the newly developed areas of Sejong-si and Wirye by the government. The dharma center is unique because it can be utilized in spreading Buddhism to the population of 40,000 residents of Gyeryong City and also it is a military designated temple at the same time.

Abbot Jinhong of Hoguksa in Gyeryongdae stated, “Located in a green area, looking over Gyeryong City, the center will become the head temple within the military and also be in charge of disseminating Buddhism in the neighboring regions of Daejeon City and Chungnam Province. Let us focus our strength to gather one million aspirations for the cause so that the construction of the temple outside the military command can be realized adequately with high hopes.”