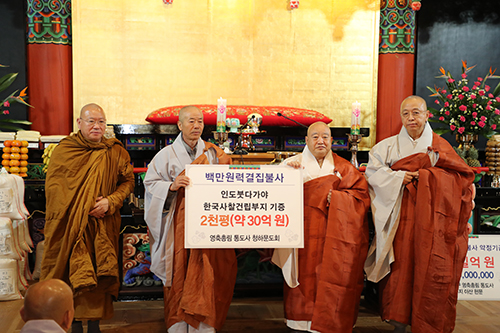 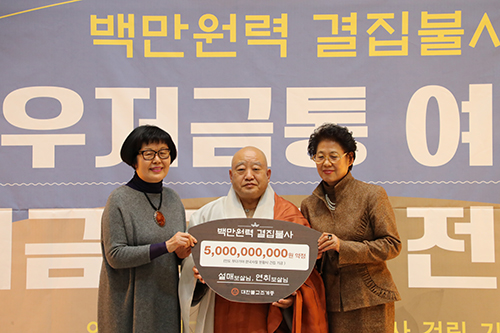 ① Bunhwang-sa Temple to be builtin ‘the Land of Enlightenment’

The One Million Vows Assembly, one of the key initiatives launched by the 36th Administration of the Jogye Order of Korean Buddhism, led by Most Ven. Wonhaeng, is hitting its stride as ardent Buddhists all over the country are rallying around the Jogye Order’s president.Accordingly, a variety of projects are now taking shape as the faithful are responding heartily to his call.&amp;amp;nbsp;

Aspiration isthe key tosuccess of the One Million Vows Assembly. Because of Korea’s aging population and the declining birth rate in rural areas, some temples have fallen on hard times as their congregations begin to dwindle. For a long time the Jogye Order has been seeking ways to combat this problem, and the One Million Vows Assembly is part of the Order’s resolute efforts to build a foundation upon which the current crisis be overcome and Korean Buddhism be renewed.

When the One Million Vows Assembly was first proposed, Most Ven. Wonhaeng, president of the Jogye Order, succinctly summed up why this initiative is so crucial. He emphasized, “Each of us standing alone may be small and weak, but if the aspiration of a million Buddhists can be channeled together, we can achieve anything, anywhere in the world.”&amp;amp;nbsp;

For instance, if a million Buddhists set aside KW100 a day, it would add up to KW36billion a year, which could then be invested in projects that will rewrite the future of Korean Buddhism. Since last year, Most Ven. Wonhaeng has given himself wholly to this grand campaign to drum up support in the Assembly all around Korea by touring local headquarters temples.

Officially launched one year ago, the Assembly is already producing tangible results. One great example isthe project to build a Korean-style temple in Bodh Gaya, India. It has already progressed to the point where the ground-breaking ceremony will be held this coming March.

This plan to construct a traditional Korean temple in Bodh Gaya, where Sakyamuni Buddha attained enlightenment under a Bodhi treeandwhere Mahabodhi Temple and its pagoda now stand, has a special symbolic meaning with respect to Korean Buddhism’s identity in the world. The temple will serve as a spiritual refugefor Korean monastics and laity alike who come to this ‘Land of Enlightenment’ on pilgrimage.

Bodh Gaya is one of Buddhism’s four holiest sites. Because of its exalted status, almost all major Buddhist traditions of the world are represented by a temple or monastery built in their own unique style in Bodh Gaya. The absence of a Korean-style temple here is conspicuous, and it has been a long cherished aspiration of Korean Buddhiststo establish one in Bodh Gaya.

The Bodh Gaya Temple project will be a great catalyst for the growth of the Assembly into a force that will sweep through Korea. The Bodh Gaya project has already received KW 5 billion in donations from Salmae and Yeonchui, and this was quickly followed by a donation of landfrom Ven. Cheongha’s Congregation worth KW 3 billion where the temple will be built in Bodh Gaya.&amp;amp;nbsp;

The Korean temple, to be located about 200 meters from Mahabodhi Pagoda, will be named Bunhwang-sa. ‘Bunwhang’refers to a beautiful lotus flower that stays untainted even as it blooms out of mud. Queen Seondeok commissioned a temple of the same namein Gyeongju, the ancient capital of the Silla Dynasty, as an act of fervent devotion to repulse foreign invaders and bring prosperity and peace to her kingdom. The name Bunhwang, chosen by the principle donors,embodied their wish to overcome difficulties at home and abroad that Korea faces even today.&amp;amp;nbsp;

The Bungwang-sa project is going smoothly and will be completed by 2022. The architectural design has been finalized, and the Jogye Order has signed an MOU with the local Buddhist community to facilitate its construction. Bunhwang-sa Temple will have three floors with a total floor area of 3,305 square meters, which include a Buddha hall, meditation hall, guest quarters, a PR office, tea rooms, etc.

The Jogye Order will dispatch a delegation, led by Most Ven. Wonhaeng, to Bodh Gaya, and they will remain there from March 26 to 31 to attend the ground-breaking ceremony. This will signal, in the land of Sakyamuni Buddha, the beginning of Korean Buddhism’s grand march toward revival.&amp;amp;nbsp;

Most Ven. Wonhaeng said, “One person’s aspiration will move 100 people, and 10,000 vows will flow into a grand river of one million vows. We will never stop our ardent prayers until the bright future of Korean Buddhism unfolds wide before us.” His relentless determination, which is already bearing fruit, has much to teach the nation’s Buddhists.