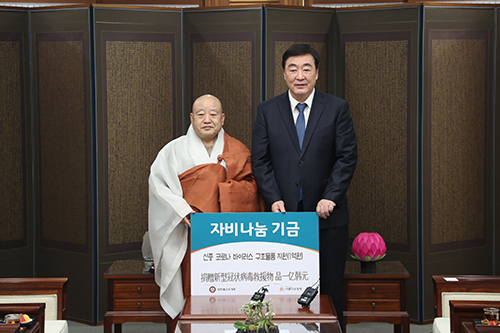 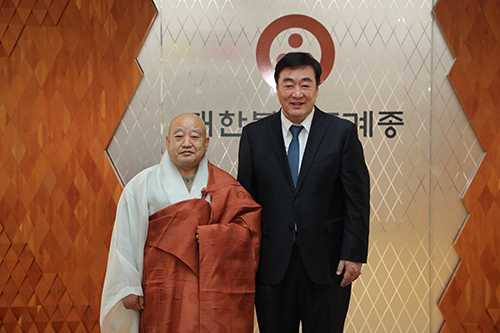 The Jogye Order of Korean Buddhism provided a humanitarian relief to China where the novel coronavirus is rapidly spreading.

Most Ven. Wonhaeng, the president of the Jogye Order met with new Chinese Ambassador to KoreaXing Haiming in the reception room at the Korea Buddhist History and Culture Memorial Hall on February 10 to deliver the donation of 100 million Korean won to be used for the victims of the novel coronavirus outbreak in China. The new Chinese Ambassador was accompanied by his wife, Mr. Bang Kun and Mr. Wang Wei, respectively Councilor and Political Attaché from the Chinese embassy in Seoul.

Most Ven. Wonhaeng said, “China is the country who introduced Buddhism to Koreans. We have been the closest of all neighbors, and therefore the wish to help as much as I can naturally arises in me. I am ardently praying that this outbreak of coronavirus will come to pass as soon as possible.” In reply, Ambassador Xing Haiming said, “On behalf of the Chinese government, I gratefully and eagerly accept the helping hands of the Korean Buddhist community, especially those of the Jogye Order. It is a deeply touching moment.”

Ambassador Xing Haimingthen presented a letter of appreciation and a gift to Most Ven. Wonhaeng as a token of gratitude for the Order’s generosity.

The dialogue between the Jogye Order’s president and the new Chinese ambassador last about 30 minutes, mainly on the exchanges between Korean and Chinese Buddhist communities.

The Chinese ambassador said, “When Ven. Yangjue, the chairman of the Buddhist Association of China learned that I would be posted as China’s next ambassador to Korea, he asked me to give his warmest regards to the president of the Jogye Order. The Chinese embassy will do its best to promote even a closer relationship and cooperation among the Buddhist leaders of the two countries.”

Speaking about the history of the Korea-China-Japan Goodwill Conference that started in 1995 and is continuingto this date, Most Ven. Wanhaeng pledged his commitment to make the 2020 Conference, which is to be held in Korea, as big and grand a success as the Conference last year held in Shanghai.

The Jogye Order explained that today’s meeting was held because of Most Ven. Wonhaeng’s firm belief that one should help all beings suffering from diseases as if it is his or her own sickness. Thus, the president suggested to have today’s meeting as an act of compassion, whichChinese embassy readily accepted.