Our ancient ancestors found out early on that the application of heat changes the chemical composition of clay and stones, transforming them into completely different materials. This knowledge enabled humanity to create various tools, which eventually led to the birth of civilization. Archeological periods (the Paleolithic Age, the Neolithic Age, the Bronze Age and the Iron Age) are identified by the tools they manufactured and used because tools have critically influenced the course of human history. Social stratification became common with the introduction of metallurgy in the Bronze Age. The surplus production of foodstuffs facilitated by the use of metal tools engendered marked inequalities of wealth and power. Metalworking has been one of the most cutting-edge and technology-intensive industries in any society, which means it was strictly monopolized and jealously guarded by the ruling class. These days, metals such as copper, iron, silver and gold have become easily available commodities, but in ancient times they were rare and costly and access to them was limited. The glare from bronze mirrors in the hands of priests awed the people of the Bronze Age into submission, and metal swords wielded by warriors took lives with an ease previously unimaginable in the Stone Age.

One of the earliest metalworking techniqueswas casting, by which liquid metal is poured into a mold containing a hollow cavity, which is a 3-dimensional negative image of thedesired shape. The mold and the metal are then cooled until the metal solidifies, and the solidified object recovered from the mold is also called acasting.Casting waswidely used both for producing large objects such as bronze sculptures and smaller items such as jewelry in precious metals with equal ease. It was also considered a highly adaptable and flexible technologyfor making complex shapes and adjusting production quantity.

To ensure a successful result, it is important to select the right type of mold and material first. The casting process can be subdivided by the materials used to make the mold, such as stone, sand, wax or kaolin clay.

In stone mold casting, a stone block (pyrophyllite and talc were widely used in the Bronze Age) is hollowed out in the shape of the intended pattern into which molten metal is poured and left to set. Various stone molds have been excavated in Korea, such as the mold for a rough-patterned mirror found in Mangsan, Pyeongannam Province, and an unfinished mold for a mirror found in Yeoungnam, Jeonllanam Province. Also found were stone molds for bronze swords, axes and gimlets. Early bronze weapons were made using crude casting methods, but eventually axes and swords began to be forged instead of cast (by which heated metal is pounded with a hammer to shape it). This was done in order to give weapons improved strength and sharper edges.

According to Cheongong gaemul, written by Song Eung Seong in 1637, sand-molded casting is characterized by the use of sand mixed with clay to make the mold. Sand-casting uses an outer mold, which is carved on the inside, and an inner mold, which is made smaller than the outer one so that a cavity is created between the two. Into this, molten metal is poured and left to cool

Similarly, lost-wax casting uses a sand and clay mixture for its mold material, but it is different from sand-casting in that the model, or pattern, for the final object is made from wax. Resin is added to the wax to craft a copy of the model; a more intricate and nuanced expression can be achieved by this method. Covering the wax model with the clay and sand mixture and firing the piece leave a mold cavity inside as the wax melts and runs out. Molten metal is then poured into it and left to harden.

The kaolin clay molding technique is described in Husang rok edited by Sin Junghwu in or before 1767 (the 43th year of King Yeongjo’s reign during the Joseon Dynasty). Fill a wooden frame with finely kneaded kaolin clay and leave it under the sun to make half-dried clay tablets. Glue a piece of paper with written characters onto the tablet and make engravings by tracing the characters; molten metal is then poured into the engravings. This method was mostly used by the private sector to create movable metallic type cast in iron.

The next consideration is to select the right casting metal, which can include copper, iron, tin, gold and silver. Gold and silver are expensive but have low meting points, so they are easier for creating intricate patterns, unlike cheaper copper and iron which have higher melting points. Still, copper melts at a lower temperature than iron, so it is more widely used than iron to create artworks and crafts; copper is also used to make bronze.

The Research Institute of Buddhist Cultural Heritage has identified certain temple ruins of great academic and historical importance from among approximately 5,300 sites all over Korea and has been conducting archeological excavations in a joint project with the Cultural Heritage Administration. In 2017, a ritual water bottle and seals cast in bronze (a copper alloy) were found in one of these excavation sites in temple ruins in Heungjeon-ri, Samcheonk. They are considered superb examples of the flourishing Buddhist culture at its peak during the United Silla Period. Two of the seals were in pristine condition, and one of them was still in a bronze inkpad receptacle when it was discovered. They are 5.1cm by 5.1cm square with a loop-shaped handle through which a cord can be fitted. Bronze is made by combining copper (Cu) with tin (Sn). Bronze is at first a whitish color, but over time its color changes to green as it oxidizes. The seals originally were probably silvery white with a subtle yellowish tinge. Bronze has many advantages over pure copper in that, due to its lower melting point, it requires less fuel for smelting and stays in the liquid state longer. This means it flows into and fills finer and more complicated grooves and crevices more easily.

In July 2018, the joint excavation team discovered a gilt-bronze demon mask from the United Silla Period in the ruins of Hwangyong-sa Temple, located on the slopes of Mt. Dongdaebong in Gyeongju. It was the first of its kind ever excavated in Korea. Decorating the Dharma Halls of Buddhist temples, demon masks were used both indoors and outdoors as ornamentation to ward off evil spirits. Approximately 15cm in height, the size of an adult’s palm, the excavated mask was intricately and exquisitely carved with life-like glaring eyes, flaring nostrils, bared teeth and a windswept beard. And it held a ring in the shape of a tightly wound lotus bud in its mouth. The front is plated with gold leaf, while the back is covered with a thick layer of patina.

It was common to find gilt-bronze pieces like the mask because gilding gives an object a gold appearance at a fraction of the cost of a solid gold object. Below is a close-up of the gilt-bronze demon mask with the gold still visible. While the ungilded bronze is corroded and green, the gold still shines. A relatively rare element,gold is aprecious metal because it is one of the least reactive chemical elements and resistant to corrosion. The two processes used to produce gilt-bronze are gold-mercury amalgam gilding and mercury-gold leaf gilding. They are no longer used in manufacturing due to the harmful mercury fumes, except for special art projects. The fumes produced by mercury plating in particular are lethally toxic and would have required special care by the gilders. In the gold-mercury amalgam gilding process, gold is first pounded into find dust and mixed with mercury. This gold-mercury amalgam is then applied to the bronze surface, and themercury is subsequentlyvolatilized by firing. The mercury-gold leaf gilding method applies a coat of mercury on the metal surface first to help adhesion, over which gold leaf is laid. The mercury is later vaporized by heating. Mercury amalgam plating leaves the surface uneven, so the process has to be repeated several times and then burnished with metal bristles to make it even. Mercury-gold leaf gilding, on the other hand, is simpler to apply and produces a relatively smoother surface. 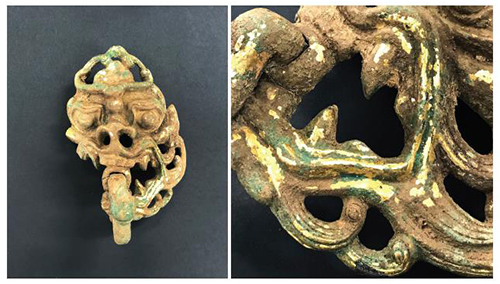 Gold was not the only element used in gilding to change the color of a metal object. Tin is also applied to gild the surface white. One of the metals used in producing a bronze alloy, tin was rarer and more expensive than cooper. There were bronzes with a range of different compositions, and the cheaper the bronze was, the less tin it contained. Higher copper content means a higher melting point, in which case lead was added to lower it back down. But with less tin in the alloy, bronze turns more yellow, which makes the object less desirable, especially when it is used to make a mirror. In that case, a thin coating of tin was applied on the surface to create a white coloring by using mercury as an adhesion agent. However, such mirrors probably would not have lasted long because tin turns black as it tarnishes.