It is now scientifically proven that templestay lowers the stress. 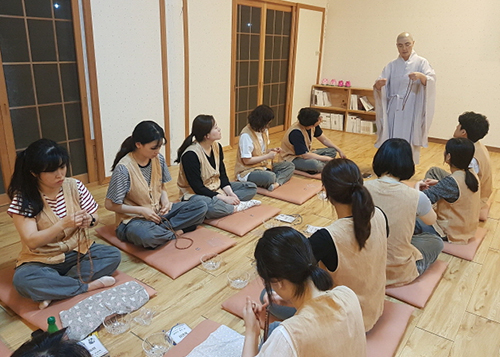 Scientists now say that templestay has positive impacts on mental health, enabling people to cope with stress better, reducing feelings of depression, and stabilizing mood swings, among other things. The positive influence was more pronounced among the participants who actively joined various Buddhist practices offered by the temple, compared to those who just relaxed at the temple on their own.

The Cultural Corps of Korean Buddhism(Director: Ven. Wongyeong) and the team of psychiatrists from Seoul National University Medical Center led by Dr. Gwon Junsu published a join report on August 23 titled Research on Physical and Psychological Therapeutic Effects of Templestay.

The research, conducted over the period of 2 years from 2013 to 2015 studied the behavioral and psychological effects of the templestay as an alternative to psychotherapy. The report has been published in various academic journals in 2018 and 2019 such as Mindfulness, Psychology Health & Medicine and Frontiers in Human Neuroscience.

50 people with full time jobs participated in the study, 33 of which actively joined Buddhist practices such as meditation, prayers and rituals led by the templestay organizers, while 17 of them just took a rest at the temple. Both control groups after a 4-day templestay were subject to MRI and other observation methods to measure the effect on their brain functions. Both groups gained short-term benefits from the templestay, showing improved focus on the present moment and psychological resilience, the ability to mentally or emotionally cope with a crisis or to return to pre-crisis status quickly.

It was particularly noted that the mental health benefits gained by participating in the templestay were maintained at a high level for those who joined Buddhist meditation sessions and rituals even after 3 months. Their cognitive abilities including information processing and attention stayed improved as well.

In a separate setting, 64 teenagers who meditated as part of the templestay program also experienced increased sense of happiness, and reduced feelings of stress, anxiety and depression.

Researchers concluded, “The templestay programs offering Buddhist meditation and rituals induced positive structural changes in the white matter of the brain related to information processing, which resulted in the long-term positive impact on mindfulness and psychological resilience.”

Dr. Gwon, the head of the joint research team and psychiatrist at Seoul National University Medical Center said, “The templestay can be a very useful resource that helps people cope with stress, especially valuable since stress is often dubbed as the health epidemic of the 21st century.”

Ven. Wongyeong, the head of the Cultural Corps of Korean Buddhism said, “The subject of meditation’s effect on brain has been much researched, but this report is meaningful in that it was the first time the effect of the templestay, where Buddhist prayers and rituals as well as meditation are offered, has been specifically and scientifically studied.”

He continued by saying, “The programs provided as part of templestay, such as 108 bows, Buddhist rituals and tea ceremony as well as meditation are now proven to be effective in calming the troubled emotions and restoring psychological stability. I hope those who are suffering from excessive stress will come and enjoy peace of mind the templestay may offer.”

Dacu Gonggam has produced a documentary based on the result of this research, which is scheduled to be aired on November 17, 2019 on KBS 1 Channel. The documentary will show how those who are going through hard time in their 30s and 40s with their stressful careers, personal conflicts, depression, etc. came to join the templestay and how their mind and body are affected by the experience; how their lives in the workplace, with the family and friends have been changed since then.