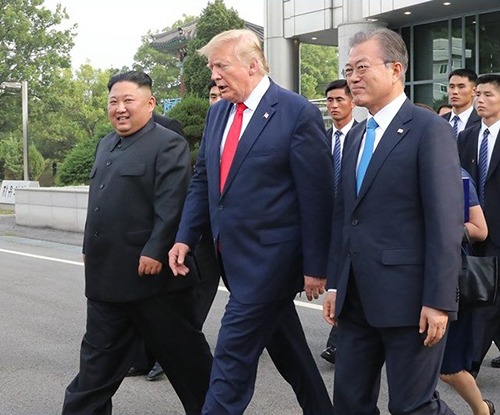 The Jogye Order celebrates the “era of peace and prosperity on the Korean Peninsular” as Donald Trump and Moon Jae-in met Kim Jong-un at DMZ.

The Jogye Order of Korean Buddhism (President: Ven. Wonhang) issued a statement through its spokesperson Ven. Osim on July 1 and welcomed the “historic meeting among the leaders of South Korea, the United States and North Korea at DMZ.”

Past Separation and Toward Prosperity

- We welcome the historic meeting at DMZ-

On June 30, 2019, President Moon, President Trump and Chairman Kim have met at Panmun Pavilion and shook hands for the first time after the armistice 66 years ago while the world watched in awe. The Jogye Order, along with all Korean Buddhists, welcomes this historic meeting among the 3 heads of states which signals a resumption of talk between the South and the North Koreas, and a new beginning in the relationship between the United States and North Korea since the unfortunate breakdown of the talk in the summit held in Hanoi, Vietnam.

During the DMZ meeting, President Trump and Chairman Kim each walked across the demarcation line, symbolically affirming their resolution to end the hostility and mistrust of past 66 years and settle peace on the Korean Peninsular and normalize relationship between the US and North Korea.

This new chapter in history has opened thanks to the unshakable conviction and tireless work on the part of President Moon and his administration toward the era of peace and prosperity on the Korean Peninsular. They have born fruits when President Trump proposed this meeting, which was promptly accepted by Chairman Kim.

We hope the he DMZ meeting will serve as a catalyst by which the final settlement of a peaceful and stable framework in the Korean Peninsular is implemented through productive developments in South-North Koreas relations and continued dialogue among all parties concerned, especially the US and North Korea

The Jogye Order will also do its best to promote cooperation and exchanges between the Buddhists from the South and the North, so that we can move forward peace, prosperity and unity on the all of the Korean Peninsular.