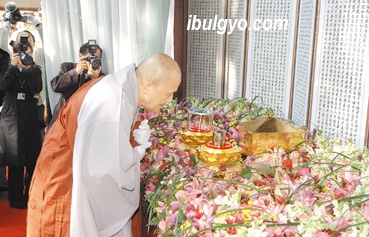 The Buddha’s sarira of Hyeondeung Temple’s Three-storied Stupa, which was stolen 30 years ago and then found to be kept at Samsung Foundation of Culture recently, has finally returned to its original place with a formal service for sarira transfer.
Administrative Headquarters of the Jogye Order of Korean Buddhism (president, Jikwan Sunim) carried out a sarira-transfer service at the front yard of the dharma hall in Jogye Temple at 11 a.m. Nov. 7th. The service, which was conducted under the mutual agreement between the Jogye Order and Samsung Foundation of Culture, attracted public attention in that the Buddha’s relic is to be restored to its original place, serving its original purpose.
Starting with a bell-ringing, the sarira-transfer service went on to follow the order of a relic-transfer ceremony, buddhist hymns and dances, a relic offering ceremony, and a supplication chanted by the abbot of Jogye Temple.
What cut a conspicuous figure was, especially, a parade of "Yeon", i.e., a sedan chair enshrining the Buddha’s relic, marching in line with a buddhist music band and banners around the precincts of the temple. Such ritual had already passed through the historical research by Wonmyeong Sunim, a certified craftsman of the Jogye Order’s buddhist hymns. Subsequently, a dharma lecture meeting took place, at which Han Yong-Hoi, the representative of Samsung Foundation of Culture, delivered a transfer warrant to Chokyeog Sunim, abbot of Hyeondeung Temple.

The representative director said, "We agree to the intent of the Buddhist community and are glad to hold the service to transfer and enshrine the Buddha’s relic, which is the object of religious faith, to its original place. Though the Buddha’s sarira of Hyeondeung Temple was related to Samsung Foundation of Culture for a while, now we hope that lots of lay Buddhists will see it for themselves at its original place."

Jikwan Sunim, president of the Jogye Order, said at his dharma talk, "We are sincerely thankful to Samsung Foundation of Culture for the preservation of it with the mind of safeguarding parents, though not real parents. As the Buddha’s relic has been restored to its original place, so we should practice and restore our original mind nature while quitting delusions in our mind and the six samsaric destinies."
Meanwhile, lay Buddhists were given a chance to see the relic for themselves after the transfer service. From Nov. 15th, Hyeondeung Temple is opening the dharma service for revealing it to the public.