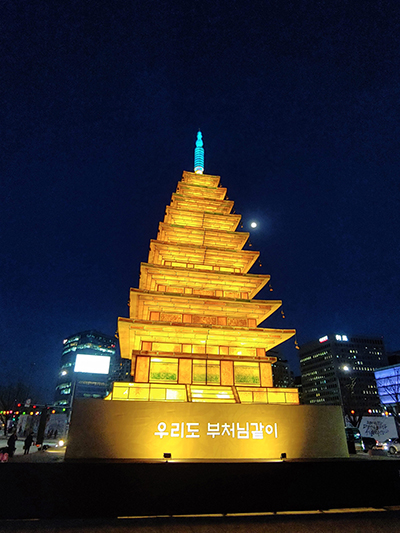 The Celebration Committee for Buddha’s Birthday (Chairman: Ven. Wonhang, the president of the Jogye Order of Korean Buddhism) held the lantern lighting ceremony on April 17 in Gwanghwamun Square where the Majestic Lantern in the shape of Mireuk-sa Temple Pagoda was officially ignited. Present in the ceremony were a crowd of Buddhists and ordinary citizens numbering two thousand strong, including the representatives of the Jogye Order, the senior most Buddhist denomination in Korea, as well as the Cheontae and Jingak Orders, all united in praising the enlightenment of the Buddha.

Ven. Wonhang, the president of the Jogye Order, said in his celebratory remark, “I pray that the light of this lantern will reveal the Buddha nature in all beings and lead them to a higher path of peaceful co-existence; that the light of this lantern will shine on the desperate wishes of the people of Korea for the reunification of the South and the North, opening a door for the new era of harmony and; the lantern will ignite the light in our mind which will brighten up the dark corners of our society.”

After having their palms together and vowing to walk the path of Bodhisattvas, the assembled crowd circumambulated the lantern pagoda chanting Sakyamuni Buddha’s name, praying for the reunification of the Korean peninsular. As yellow, red and green lanterns passed from one to another, the Gwanghwamun Square became awash with lights in rainbow hues.

Ven. Wonhang, the president of the Jogye Order of Korean Buddhism gives a celebratory speech on April 16 in Gwanghwamun in the lantern lighting ceremony. He vowed to “ignite the light in our mind which will brighten up the dark corners of our society.”

The Majestic Lantern illuminating the Gwanghwamun Square was created in the shape ofMireuk-sa Temple Pagoda, which is designated as the National Treasure No. 11.

The Majestic Lantern will illuminate the Gwanghwamun Square until Buddha’s Birthday, which is May 12 this year. Yeondeunghwi, or Lotus Lantern Festival, designated as the National Intangible Cultural Property No. 122, is officially started with the Majestic Lantern ignition ceremony in the Gwaunghwamun Square. Over fifty thousand lotus lanterns will be decorating the streets of Seoul, starting from Jongro and Cheongyecheon, reminding people of the Buddha’s enlightenment. 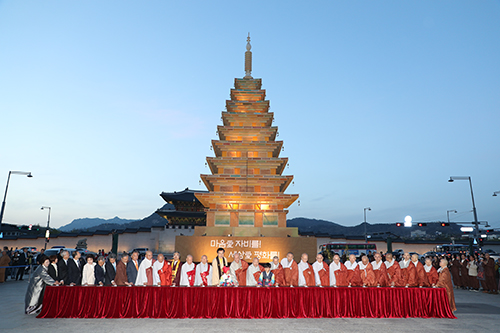