Dharma Assembly for the New Year
In the Year of the Golden Pig, Buddhist Era 2563
Presided by Jongjeong, Supreme Patriarch Jinje of the Jogye Order of Korea Buddhism


In a Dharma talk given to celebrate the Year of the Golden Pig, Buddhist Era 2563, His Eminence Supreme Patriarch Jinje of the Jogye Order counselled the assembly to share and be with the less fortunate of our neighbors and revive the Korean Buddhism by encouraging the harmony and solidarity within the Buddhist community. 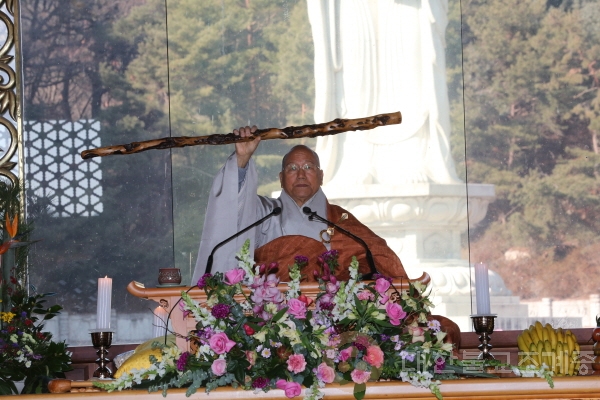 Presiding over the Dharma assembly held at Unification Prayer Hall in Donghwa-sa, the head temple of the 9th religious district and a chongnim (the comprehensive monastic training complex) at 2pm, January 8th, Jongjeong Jinje said, “In the beginning of everything, there was neither time, nor life, nor death. However, as time started passing by, we began to form discriminated thoughts in our minds. This resulted in birth, death, old age, sickness, and death, so that we became trapped in the suffering of the endless cycle of rebirth. If each and every one of us can take charge of how we use our time as free beings, every moment will become immeasurably long, and thus every day will be a good day.”
His Eminence put as the priority for the Korean Buddhism this year the harmonious co-existence of fourfold sangha, emphasizing the Buddhist wisdom of knowing “you and I are not two, and humans also share one body with nature.” He quoted Buddha, who taught practitioners to “love and care without fighting and appreciate each other, like water and milk blending together in harmony,” and said that we desperately need to learn “When we center ourselves on our true nature, as we all live together, dedicating ourselves to our work; developing generous patience; showing consideration and respect for others; and sharing with the under-privileged, we can all enter the Pure Land of Utmost Bliss of Amitabha Buddha.” 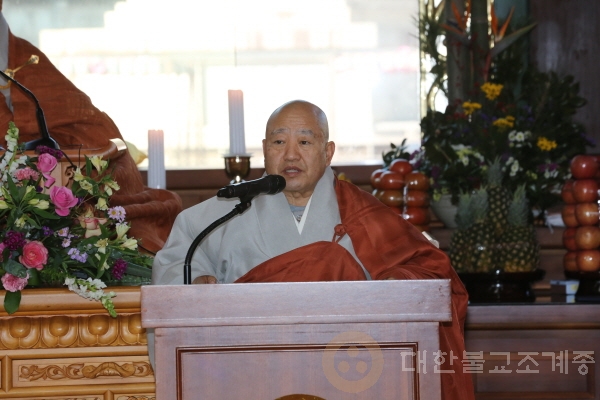 He continued by saying, “If all humanity seeks to lead lives of their own, we must investigate the following hwadu, “What was my true nature before I was born to my current parents?” as we go about our daily lives. When we continuously investigate this hwadu, we will be able to suddenly attain enlightenment, so all kinds of defilements and conflicts in our minds will disintegrate like melting ice, and we may experience great comfort, complete freedom, and lasting peace.”
Ven. Wonhaeng, the President of Jogye Order joined the Supreme Patriarch in stressing the importance of “the harmony within the Buddhist community” as the first priority, through which he will do his very best to “open a new and innovative chapter for the future of the Korean Buddhism by stabilizing the Jogye Order and solve the various issues brought to our attention over the years,” vowing to “muster all hands, including my own, to achieve unity and innovation guided by the teachings of virtuous elder masters.” 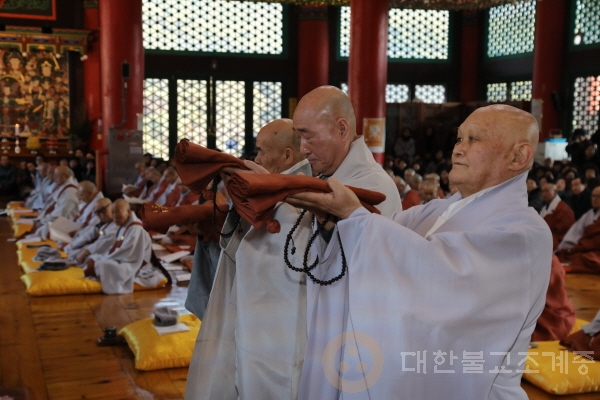 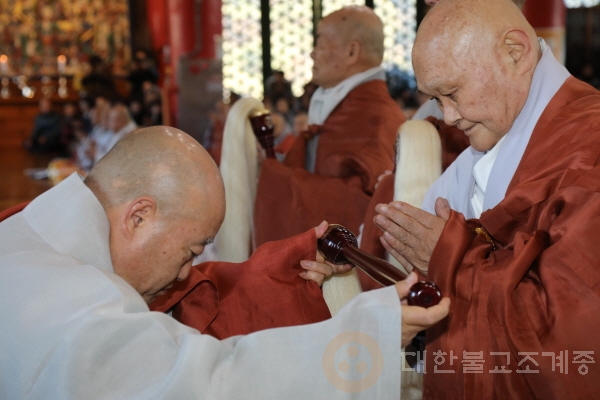 The Dharma assembly on the occasion of the New Year was followed by the ceremony inaugurating those who have newly acceded to the rank of daejong-sa, a title reserved only for the most eminent monks and nuns of more than 40 years of service with impeccable reputations for both learning and practice. Commanding the highest respect for their leadership within the Order as well as the depth of their spiritual enlightenment, they are nominated by the Precept Committee and the Elder’s Council and confirmed by the Central Council. The ceremony is also presided by the Supreme Patriarch of the Jogye Order.
Ven. Jongjin, Chairman of the Precept Committee started the inaugural ceremony by reciting a prayer to Buddha, which was followed by flower offering, presentation of certificate and robes, request to bless the assembly with Dharma, Dharma talk and group photo. ​ 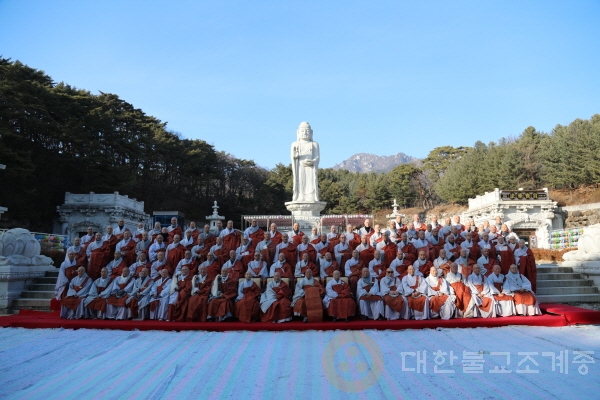