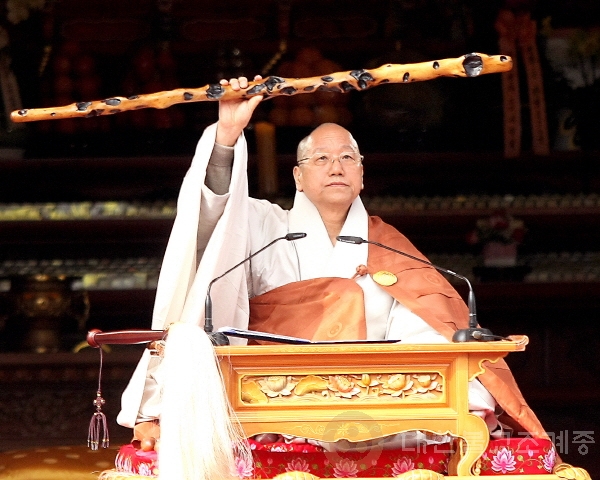 Green trees in verdant mountains are the embodiment of the Vairochana Buddha.
The sounds of ocean waves are the dharma talks of all Buddhas.
If someone asks if I know the essence of the teaching,
it is the power of samadhi and prajna of The Diamond Sutra.

This is the first day of the winter retreat, in the Year of the Golden Dog. This retreat will span the next three months, or about 90 days.

The assembly going into this winter retreat shall newly fortify their commitment towards aspiration and devotion each day, with the strength of a mountain and uncompromising determination to achieve a significant awakening.

The essence of hwadu meditation is not about how long you can stay seated, but the depth of your investigative mind, ceaselessly examining your critical phrase with zealous efforts that can pierce through your bones.

When wrestling with your hwadu, you should focus completely on playing the game, tightly locking your hands onto the thigh band of your opponent. Likewise, a Ganwha Seon (key-phrase) practitioner shall take hold of a hwadu, scrutinizing it over and over again without stopping. Also, you must not allow defilement or delusions to seep into any crack of your mind.

“What was my true nature before I was born to my current parents?”

A thousand, or even a million times a day if possible, you should examine and reexamine your hwadu, whether you are sitting down or standing up, coming or going, strolling or working.

This was the time when Nanquan Puyuan (南泉普願, 748-834), the Dharma heir of Mazu Daoyi, was waiting for the time to pass by, ripening his efforts to attain enlightenment in a place called Gao’an (高庵) after receiving the seal of approval from his master teacher.

While he was waiting for time to pass by in Gao’an, a traveling monk came along and asked to stay overnight. In the morning after breakfast, Chan Master Nanquan asked the monk for a favor.
“I am heading to a field over a mountain ridge to work. At lunchtime, please cook yourself a meal and bring some for me as well.”

Afterwards, Chan Master Nanquan was working in the field, but there was no sign of the monk bringing his lunch, even way past meal time.

So, he came back to his hermitage, but when he arrived, he saw all of his belongings smashed and destroyed, and found the monk lying down idly on his large low wooden bench.

After seeing this, Chan Master Nanquan went over to the wooden bench where the monk was lying down, to lie down next to him. Then, the traveling monk simply and abruptly got up and left.

In the midst of this, there was a discerning eye, the power of discriminating insight into the noble teachings of the Buddha.

Later on, after coming out into the secular world to teach, he spoke highly of the traveling monk, complimenting him,

“When I was dwelling in a hermitage, a bright monk came along one day. To this day, I have never seen such an insightful practitioner.”

Dear Great Assembly!
Can you understand the earnest actions of the traveling monk, who destroyed Chan Master Nanquan’s belongings in the hermitage, and who suddenly walked out when the master lay down beside him?

“He had the discerning eye that accompanies the Buddhas of three periods and the generations of patriarchs.”

Did you comprehend the intent of Chan Master Nanquan, as he lay down on the wooden bench next to the traveling monk, who had just smashed all of his belongings in his dwelling?

“He has the self-observant eye to understand the formation and dispersion of clouds in the empty sky.”

After walking for a few days, Chan Master Nanquan drew a large circle in the middle of the road and spoke, saying,

“If you can clearly tell me one thing about this great circle, I shall go with you to see National Preceptor Huizhong. However,
if your answer is not acceptable, I won’t go with you at all.”

Accordingly, Master Magu sat inside the great circle while Master Guizong offered a curtsy to the circle, like a woman.

“If you act like that, there is no reason to go and see National Preceptor Huizhong. I shall go back.”

As soon as Master Guizong heard this declaration, he bellowed,

“What is the nature of your intention?”

Truly, Chan Master Guizong had the discerning eye that could transcend the Buddhas of three periods and the generations of patriarchs.

Can you grasp what it is?

One who is truly enlightened verifies the genuineness of the eye of wisdom, which can distinguish levels of samadhi.

Though you may fool everyone in the world, you can’t deceive a truly awakened teacher, who carries the true, enlightened eye of the Buddha-dharma, even if you try. As a truly enlightened teacher understands the essence of wisdom, it is not possible to deceive them.

Therefore, if you can’t verify someone’s genuine enlightenment the moment he or she opens his or her mouth, you are just an apprentice in training, still acquiring and cultivating the Buddha-way without the true, enlightened eye. Of course, you should continue to zealously cultivate the wisdom of Buddha.

In broad daylight, someone was caught in the act of stealing.

Can you grasp the realm of these three sages, where they lived freely?

Calling, and calling one another, coming and going.

One doesn’t realize that dewdrops have wet their whole body.

[With his Dharma staff, he strikes the dharma table once and descends from his seat.]