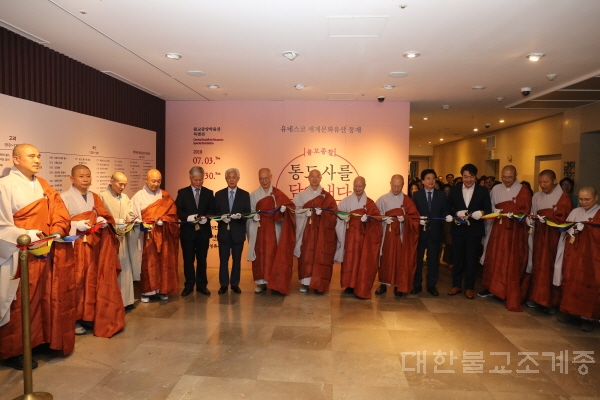 4.       Venue: Exhibition Hall at the Central Buddhist Museum of the Jogye Order of Korean Buddhism

5.       Organizer: The Headquarters of the Jogye Order of Korean Buddhism

6.       Overseer: The Central Buddhist Museum of the Jogye Order of Korean Buddhism

As a special exhibition of the main temples of each district in 2018, the Central Buddhist Museum (President Osim) has selected Tongdosa Temple, the 15th District Main Temple of the Jogye Order of Korean Buddhism. This monastery is an excellent example for demonstrating Korean Buddhist artwork. As one of the Tri-Gem Temples (referring to the Buddha, the Dharma, and the Sangha), we tried to reconstruct the significance of the Buddha Temple, Tongdosa of Yeongchuk Monastic Complex.

With the opening ceremony of the Special Exhibition “The Buddha-Gem Temple: Presenting Tongdosa” on Tuesday, July 3, 2018, the Central Buddhist Museum will feature the myriad cultural properties of Tongdosa. These will be available for viewing until Sunday, September 30. Through this exhibition, we hope to help visitors gain a greater understanding of Buddhist culture and deepen their devotion for the religion.

In addition to the history of Tongdosa, this special opening will include a showing of the Geumgang Ordination Platform as well as the sarira, or sacred relics, that are sacred in this Buddha Temple. Moreover, along with the ancient artifacts of Buddha’s teaching belonging to the temple, we would like to shed light on the founder, Preceptor Jajang, and other venerables who continue to uphold the spirit of the institution’s establishment. The exhibition focuses on the following themes: Part I: Jeokmyeolbogung of Tongdosa, the Holy Sarira of Sakyamuni Buddha; Part II: Spreading the Dharma through Buddhist Relics; and Part III: Precept Master Jajang, and Tongdosa Afterwards. With these three themes, we hope to highlight the value of Tongdosa, which is the largest monastery that has been nationally recognized. We will introduce the celebrated artifacts according in the following format.