33 Striking of the Bell for Successful Intra-Korea Summit 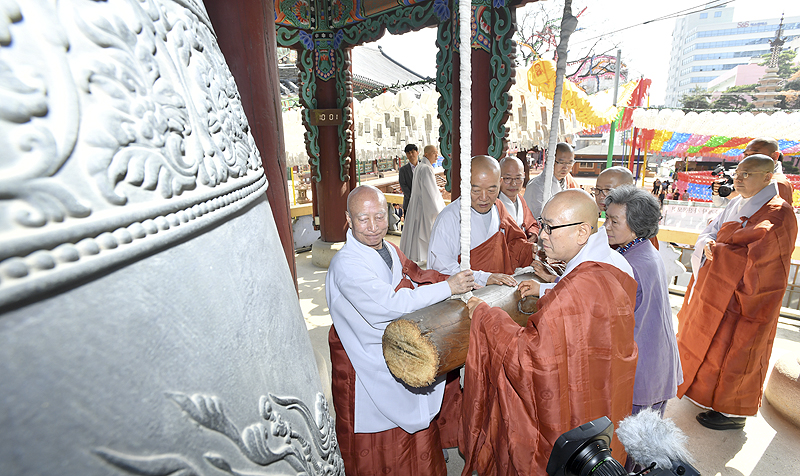 Bell was rung thirty-three times at Jogyesa Temple, the chief temple of the Jogye Order of Korean Buddhism, a day before the historical inter-Korea summit.

Ven. Seoljeong, the President of Jogye Order rang the bell thirty-three times to pray to the Buddha for a successful intra-Korean summit along with monks in his leadership at Jogyesa Temple on April 26.

Before the ringing of the bell, Ven. Seoljeong gave opening remarks which contained the all citizens’ sincere wish for successful summit.

Ven. Seoljeong mentioned that, “Just before the historical summit meeting, all citizens have gathered their hearts as one […] I wish that the sound of the bell will spread throughout the world and the summit would be successfully held, with the protection from dragons and all holy beings, to denuclearize the Korean peninsula as well as to bring permanent peace.”

He also stated that “Buddhist followers affiliated to Jogye Order has also prayed for the summit for the entire week. Temples all around the country will be ringing the bells on the day of the summit as well.

Ven. Seoljeong emphasized that he would “continue to pray with one heard and one mind for peace on the Korean Peninsula and unification.”​