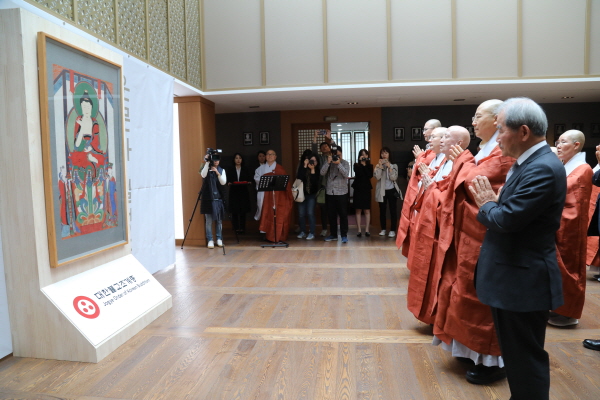 Repatriation Ceremony for Unmunsa Temple Painting of Chilseong was held at the Memorial Hall of Korean Buddhist History and Culture on April 13.

The Painting of Chilseong was repatriated to be returned to its original site, Unmunsa Temple in Cheongdo through active and close cooperation between Jogye Order of Korean Buddhism and Overseas Korean Cultural Heritage Foundation.

The Unmunsa Temple Painting of Chilseong was purchased at an auction by Bonhams New York on March 21. The painting was returned to Korea on April 11 and it is planned to be displayed in Unmunsa after today’s special exhibition.

The repatriation was possible due to active effort of Unmunsa Temple and close cooperation of the Order with the temple, the foundation and relevant institutions. The occasion has become an example for further cooperation between Department of Culutural Affairs and Jogye Order of Korean Buddhism and Overseas Korean Cultural Heritage Foundation to repatriate cultural relics from abroad.