​​Meditation: Secret to Sensational Wave of the Women’s Curling Team 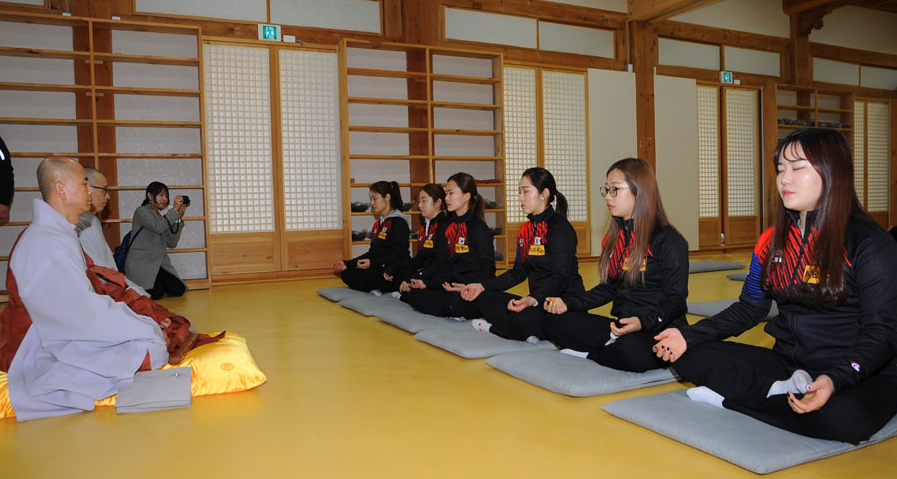 Along with the yelling of “Young-mi! Yong-mi!” by the skip Kim Eun-Jung, the Women’s Curling Team spread the so-called “Young-mi” syndrome over the entire Korean peninsula. The members of the team and officials of Korea Curling Federation participated in a welcoming event prepared by Gounsa Temple.

Gounsa Temple, the Head Temple of th 16th Distict has been supporting the curling team since 2013 with instructions in Buddhist meditation practice to enhance the performance of the team members as well as transmitting them the methods to keep equanimity and peace of mind in any environment and circumstance. As a result, the team was able to win silver medal in PyeongChang Winter Olympics exceeding the most fanciful expectations. The players have been praised for having made a historical victory by gaining popularity in a sport which was barely known to many Koreans.

In March 12th, Ven. Hosung, the abbot of Gounsa Temple, held a welcoming event for the Women’s Curling Team where more than 50 participants attended. The abbot stated that, “The players have shown the pride of Korean to the world in the Olympics. As you have provided hope to our citizens in times of difficulty, you will make many more achievements with meditation practice which will bring you back to the beginner’s mind and equanimity of mind.”

Kim Kyung-Du, the vice president of the Korea Curling Federation expressed his gratitude in his remarks that, “The purpose of the first visit to Gounsa Temple was for the players to learn how to tame their mind to perform well in the games. The help and support of Ven. Hosung and other monks have been great help for the players.” Kim Min-Jung, the coach of the curling team, mentioned that, “Curling is an extremely delicate sport requiring utmost concentration of the players. Buddhist meditation and mind practice learned at Gounsa has exerted great power at every critical situation.”

Kim Eun-Jung, the skip of the team, also said that, “Meditation Practice at Gounsa Temple has allowed her to overcome arrogance and selfishness to maintain equanimity and communicate better with the teammates. So, the teammates could play as one team and earn a good result.”