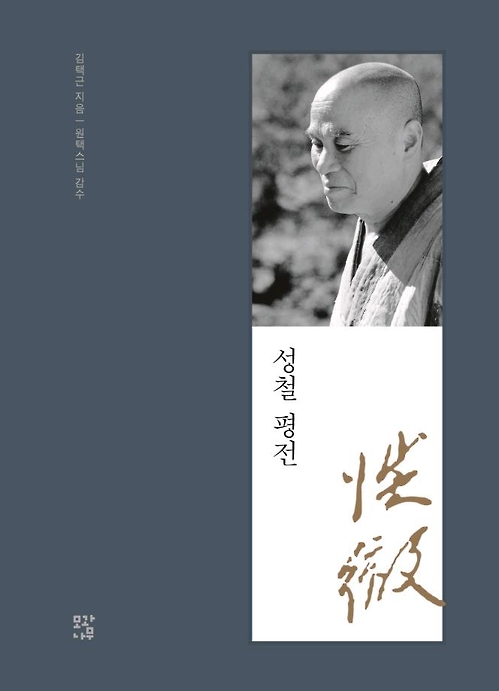 After having reviewed 110 books on Buddhism submitted by 34 publishers, the grand jury for the 14th Buddhist Publishing Culture Award - organized by the Central Directorate for Religious Affairs at Jogye Order of Korean Buddhism and hosted by the Buddhist Publishers Association - announced 10 Buddhist Books of the Year and 1 recipient of the Hyangsan Translation Award.

“Biography of Seongcheol” is written by Kim Taek Geun, a journalist who remembered the Great Seon Master Seongcheol as “the one who travelled to the planet earth leaving the least amount of marks during his life, yet leaving the deepest fragrant.” The book was praised for tracing back to the Great Seon Master Seongcheol’s life and thoughts, successfully capturing the teachings and enlightenment, and ultimately reincarnating the Great Seon Master back to the world. “Biography of Seongcheol” is especially remarkable for bringing back to us the teachings of the Great Seon Mater 70 years after the reformation movement at Bong Am Sa temple and 50 years after the 100-day dharma sermon. Therefore, it was acclaimed as a much needed book that could guide us to the life of truth and the way to live happily with our neighbors in the age of chaos.

The following is a summary of a lecture given by Kim Taek Geun regarding the “Biography of Seongcheol” titled teachings left by the Grand Seon Master Seongcheol at the 23rd Buddhist Forum. The lecture provided five great teachings by the Grand Seon Master Seongcheol including “Let’s live by Buddha’s law”, “Three-thousand prostrations”, ‘“Discourse of Sudden Enlightenment - Sudden Cultivation”, “Let’s take a good look at ourselves” and “Let’s pray for others and help them without them finding out”

Religion is related to the thoughts after death and it is about obtaining eternal happiness through leaving the relative and finite world to enter the absolute and infinite world.

Grand Seon Master Seongcheol also wandered in earlier part of his life seeking for the way to eternal happiness. At first, the young monk thought that the way could be found in the books. So, he read all kinds of books. However, the way never appeared to him. The way to eternal life and eternal life could not be obtained from the books. Then one day, his eyes were stuck on a line of sentence in the book, <Lecture on Vegetable Root Discourse (菜根譚)>.

“I have a book made without paper or ink. Though there is not a single word in the book, the book always reflects a great light (我有一卷經 不因紙墨成 展開無一字 常放大光明.”

Grand Seon Master Seongcheol experienced a moment of sudden understanding. Then he searched for books without words and made without paper and ink. He finally abandoned the world of words he faithfully worshipped. Teachings of Laozi came to his attention.

“Because each and everyone has within an unerring compass, the root and source of the myriad transformations lies in the mind. I laugh when I remember that I was only searching outside following branches and leaves. When one realizes that there is neither sound nor scent on one’s own, this is the foundation for all within heaven and earth. But, people abandon their own limitless treasury and go door-to-door with alms bowl in hand like a beggar.”

The quotation emphasizes the point that people are going around door-to-door begging for food from other people’s house forgetting the treasure vault within one’s own mind. Grand Seon Master Seongcheol admitted to a fact by quoting Wang Yangming that he was dragged around by words looking at the wrong places through reading a large volume of books of all ages and countries.

When the Grand Seon Master opened the book, it was as if a bright sun was shining light toward the way in the middle of the night. <Song of Enlightenment 证道歌> taught him that the way to eternal happiness does not lie in the words or books. Those who seek the way to eternal happiness from words or books are counting the sands under the sea. This was the story of the young man, Great Seon Master was, who sought for the truth.

The mirror has never been polished to clean off the dust accrued from before,

And today the mirror has been definitely cleaned.

Tea teaching expresses that the fundamental nature of sentient beings is pure. However, the golden hue of wisdom has been draped with anguish and delusion. When we clear our mind, we are all originally Buddha. Buddha does not exist separate from us but exists within us. Shakyamuni Buddha was first to discover that all sentient beings are orignially Buddha. Finally, this was the moment when Grand Seon Master Seongcheol met Shakyamuni Buddha.

In other words, the eight phases are achieving “In the waking state, one mind (動靜一如)” state of practice through reading the <Letters (書狀)> of Chan Master Dahui (大慧) at Daewonsa Temple, receiving the dharma name of Seongcheol (성철) from Seon Master Dongsan after joining the monastic life at Haeinsa Temple, attaining enlightenment at Geumdang Seon Center of Donghwasa Temple at the age of 29, establishing association for practice at Bongamsa Temple, practicing alone at Seongjeonam Hermitage without ever leaving for 10 years, teaching for the first time at Gimlyongsa Temple, giving dharma sermon for 100 days at Haeinsa Temple and entering into Nirvana at Haeinsa. Prof. Bae was able to summarize the life of the Grand Seon Master described in the book better that the author, myself.

One could pose a question why Grand Seon Master Seongcheol read so many Buddhist books and considered them so precious. The answer lies in that the commentaries and theoretical background recorded in Tripitaka Koreana (팔만대장경) is regarded as an itinerary. It is a finger pointing at the direction of enlightenment and a traveller’s guide. Therefore, it is merely a type of prescription as stated by Shakyamuni Buddha. Since medicine cannot be obtained without a prescription, the prescription must be precious as well. This is the reason why Grand Seon Master Seongcheol always had the Buddhist sutras near him and considered them precious.