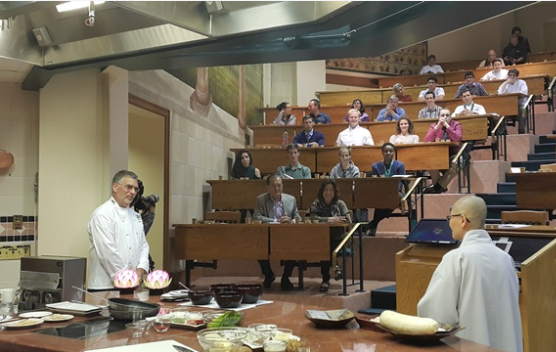 The Cultural Corps of Korean Buddhism successfully hosted the promotional event of Temlestay and Temple Food at the heart of New York on September 26, under the theme of “PyeongChang Olympic & Paralympic Winter Games with Templestay”. The event was jointly organized by the Consulate General of the Republic of Korea in New York, Korean Cultural Center New York and the New York Office of the Korea Tourism Organization.

The information session on Templestay was also provided for 40 local travel agencies at the Astor Center in Manhattan.

Templestay and Temple Food experience programs and exhibitions were offered for approximately 100 local visitors from 12 p.m. to 3 p.m. Lotus flower making caught the attention of visitors, while rice and vegetable wraps, jangajji rice balls and burdock tea pleased the palates of the event participants.

At 6 p.m., Korean Temple Food demonstration and monastic course meals were offered for 40 leaders from the culture and art communities in New York and Korean cultural organizations. The course meal was comprised of the four specialties of Gangwon province, where PyeongChang Olympic & Paralympic Winter Games will be held in February 2018.

Temple Food demonstration and Korean monastic dinner were provided for 40 leaders of the local cultural and culinary communities in New York from 6 p.m. Ven. Beopsong began the demonstration by chanting the verse by Seon Master Naong, “A green mountain says no word”, capturing the attention of participants with curiosity. The attendants calmly and delightfully relished the taste of Korean monastic cuisine inspired by Gangwon province specialties.

Chef Kenny Pinney of the Jean-Georges Restaurant in New York said, “The simple and clean taste of Korean Temple Food is inspiring. I could fully enjoy the very taste of ingredients.” A second-generation Korean American and the owner of Danji, Chef Hooni Kim, expressed his delightful experience, “I tried Korean Temple Food for the first in my life today and I was inspired by the dedicated efforts put into preparing for the food. Soybean paste soup and grilled eggplants were so good.”

The Cultural Corps of Korean Buddhism highlighted, “The promotional events held in New York served as an opportunity to make the outstanding features of Korean Buddhist culture and traditions more widely known and accessible to people in New York, encouraging the attendants to visit Korea to experience Templestay, Temple Food and PyeongChang Olympic & Paralympic Winter Games in the future.”